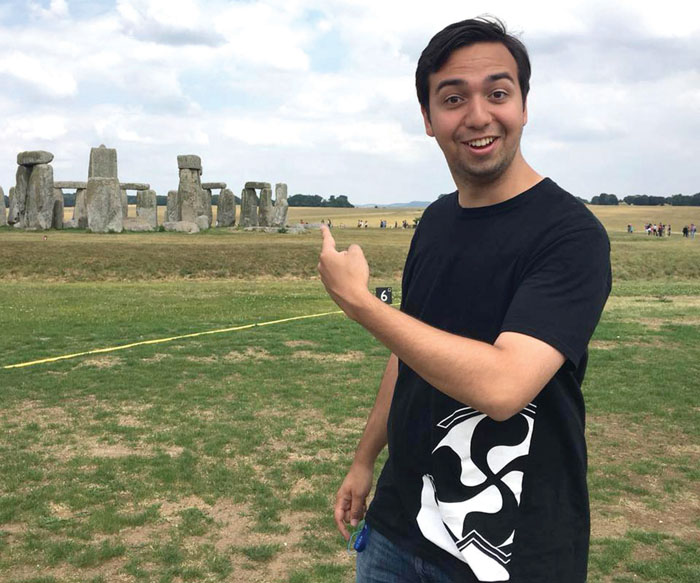 Submitted photo Daniel Morrison is pretty impressed by Stonehenge during his time in England.

This past summer, I went on the most exciting trip of my life, and it simply wouldn’t have been possible without my Catawba College family. Thanks to the support of faculty, staff and especially Gerry Hurley, I was able to spend five weeks studying literature in one of the most literarily significant cities in the world — London.

Before London, though, my first stop was Edinburgh, where I met up with the other students who would be joining me on this adventure. Brought together by the University Study Abroad Consortium, we arrived in Scotland eager to see as much as we could in the five days we had before taking the train down to London.

It became pretty clear that we would have to pack our schedules full if we were going to make the most of our time in Edinburgh — and that’s exactly what we did. Guided by our USAC advisers, we traipsed up and down the hills of Edinburgh, through castles and museums and our fair share of pubs.

One day, we even took a 12-hour bus ride through the highlands, which was easily one of the highlights of the entire summer. We took a ferry on Loch Ness, which was absolutely breathtaking, despite the disappointment of not stumbling across any monsters in the lake’s depths.

One morning in Edinburgh stands apart in my mind, though, and I know I will never forget it. My friend Nic and I, despite being worn out from our daily hikes through the city, resolved to climb Arthur’s Seat, the veritable mountain that looms above Edinburgh.

We rose early, knowing we had to be back by lunch to meet up with our group, and set out for the base of the mountain. I’ve never been much of an outdoorsy guy, but the astounding natural beauty of the rolling hills and verdant grass kept drawing me off the main path.

Nic, a good sport, followed along as we got farther and farther from the straight-shot path that led straight to the peak — and as our route became less a hike and more a climb. Every time we scrambled up one rock, we’d take in the view, and then see a rock higher up that we simply had to climb. By the time we made it to the peak of Arthur’s Seat, we were out of breath from more than just the amazing views.

But it was the way down that proved to be the most difficult. Somehow, we started down the wrong side of the mountain. In our defense, it looked just as walkable as the other, but a few minutes into our descent, we realized our mistake.

We spent the better part of half an hour sliding down the side of Arthur’s Seat, the sound of a music festival below floating up to us in the open air. It was amazing. It was terrifying. And as soon as it was over, we found the nearest pub and treated ourselves to some well-earned Scotch.

For the rest of that day, we felt like true Scots — though Nic’s version of our morning mountain climb became more and more death-defying with each telling. It was hard to say goodbye to Edinburgh, so I settled for “until next time.” I hope to return before too long and hike Arthur’s Seat again — though this time, I may stick to the main path.

We emerged from King’s Cross Station in the heart of London, all 40 USAC students. We were from all over the States, though by this point, we had all become thick as thieves. We moved into our lodging house only a few blocks from Hyde Park and the Albert Memorial.

Imperial College, where I spent eight hours in class two days a week, was in South Kensington, sitting right on Exhibition Road, so it was easy to pop into the Natural History Museum or the Victoria and Albert Museum between classes.

I had been looking forward to the tube and the Globe and the pubs, but I was taken by surprise by just how much I loved my classwork. Studying under biographer Lucinda Hawksley, a direct descendent of Charles Dickens, was an absolute privilege, as was learning about authors in the very city in which they worked.

The experience of studying Sir Arthur Conan Doyle in the morning and then spending the afternoon at the Sherlock Holmes Museum at 221-B Baker St. was surreal. We read Virginia Woolf’s “Mrs. Dalloway” and then retraced the character’s route through the city from the beginning of the novel, with Professor Hawksley pointing out all sorts of sights along the way. It was a phenomenal way to see the city and to learn about the classics of the literary canon.

Speaking of the literary canon, the greatest privilege of my time in London was having the opportunity to stand among the groundlings and watch “Hamlet” at Shakespeare’s Globe. It’s difficult to describe the feeling of taking in such a classic in a perfect re-creation of the space it was originally performed in.

The performers were incredible and — even though we were all exhausted standing in the uncharacteristically hot weather —I  loved every second of it. I came back without my group a few weeks later to catch “Othello.” Having been in a staged reading of “Othello” my freshman year at Catawba, it was incredible to see it done at the Globe.

It was a whirlwind of a summer. Though it was good to return to North Carolina where chips are chips and fries are fries and we drive on the right side of the road, I still miss the walk through Hyde Park to get to class and the tube rides back from a night at the theater.

And even though the city was absolutely devastated when it turned out that the World Cup was in fact not coming home, I’ll always be grateful to Catawba and Mrs. Hurley for allowing me to be there, to spend a summer across the Atlantic, studying what I love and experiencing something completely new.