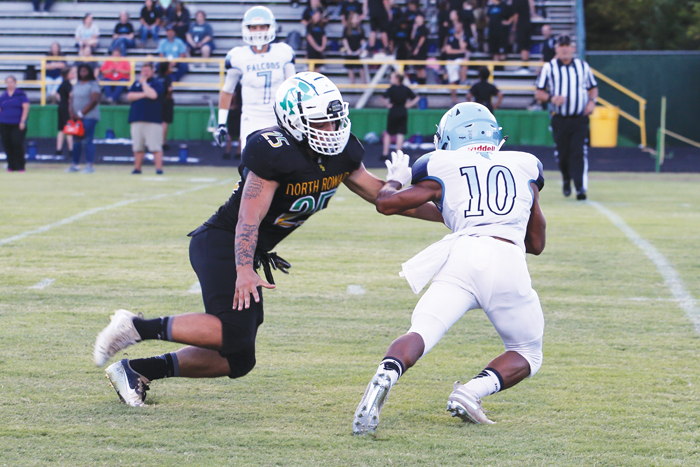 James Sipes file photo/for the Salisbury Post ... North Rowan’s Nautica Patterson (25), this week’s Friday Night Hero, is shown during a game against West Rowan on Aug. 24. Above, Patterson goes after the Falcons’ Jalen Houston (10) during a punt return.

Those touchdowns are followed by kickoffs, which are often even more exciting than the touchdowns because senior Nautica Patterson is on the kickoff coverage team.

“He’s flying around out there,” North head coach Ben Hampton said. “When we kick off now, everyone is watching No. 25 to see what’s going to happen next. He’s doing what Matthew Hoosier did for us last year as far as making big hits on kickoffs.”

Patterson has friendly competition with teammates when it comes to covering kickoffs. That wager usually involves extra exercise.

“A kickoff is a race, and I always want to be the first one down the field,” Patterson said. “If I make the tackle on a kickoff, someone usually owes me some sit-ups.”

A linebacker in North’s 4-2-5 defense, Patterson is the Cavaliers’ leading tackler. Going into Wednesday’s regular-season finale, he had 114 stops.

About a dozen of those tackles have come on kickoffs.

One of the county’s truly special players on special teams, Patterson is also North’s long snapper, which means he’s frequently the first one down the field on punt coverage. He’s also on the kickoff return team, although not as one of the deep men.

“The dream is to run back a kickoff for a touchdown,” Patterson said. “But they haven’t kicked it to me all year.”

Patterson got started with football way back, debuting with the Salisbury 49ers youth football program. His number was 25. He still prefers that jersey, even though it’s not a traditional linebacker number.

He has been an impactful player at North for three seasons, breaking into the varsity lineup as a sophomore.

“He’s been a really good  player for a really long time,” North defensive coordinator Josh Sophia said. “His speed picked up from his sophomore year to his junior year, and he’s got quite a bit of versatility. He can play inside the box as a run-stopper or he can cover a receiver in a throwing situation. He’s a  vocal guy and makes most of the defensive calls for us.”

Patterson has taken a few lumps. There was a broken thumb in the playoff game against Reidsville two years ago and a badly sprained ankle last year. This season, he hurt a knee against North Stanly, but he’s kept plugging.

“He’s one of our tougher kids, and he’s played through some stuff this year,” Hampton said. “Just an incredible kid, who leads and who is there at everything we do during the season and during the offseason. You never have to worry about him on the field or off it. He punches the clock and comes to work every day.”

Patterson says North’s 26-0 win against Carson was his best game this season. The stat sheet supports that claim. He was in on 23 tackles against Carson, which ran the ball a lot. He was the primary tackler 17 times.

He was in on 14 stops against West Rowan and 16 against North Stanly. Those are the two best teams the 10th-ranked Cavaliers (8-2) have taken on, so that speaks well for Patterson.

“I’ve improved my tackling technique,” Patterson said. “I’m doing a better job of getting my feet in the right position. I used to over-run a lot of plays, but now I’m getting more clean hits.”

Those clean hits have helped anchor a North defense that leads the county in rushing defense, total defense (yards allowed) and scoring defense.

North’s 49-0 win against South Davidson last week was the Cavaliers’ fifth shutout. That’s the most shutouts in a season for the program since the 11-1 1985 team posted seven shutouts.

Entering Wednesday’s game, North was allowing 8.4 points per game, the fewest allowed by the Cavaliers since that stingy 1985 club allowed just 5.9 per game.

“We want to get a shutout every week,” Patterson said.

It’s been a strange season due to weather.  There have been a lot of Thursday Yadkin Valley Conference games for North.

“It’s a lot easier to get hyped on a Friday after the school week,” Patterson said. “But Wednesday, Thursday or whatever, we have to go with the flow.”

RCCC student named Student of the Year by NC association

Catawba football: No matter his role, Gibson is an…