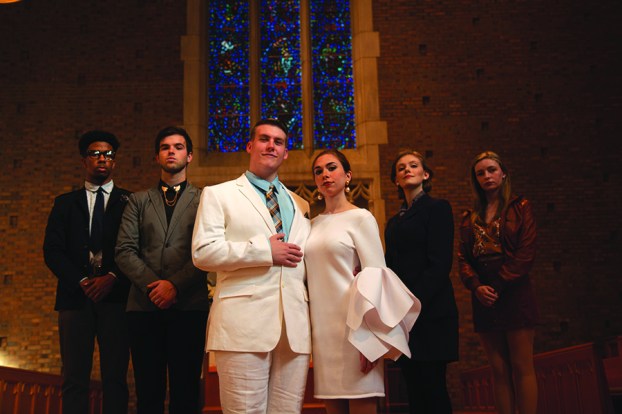 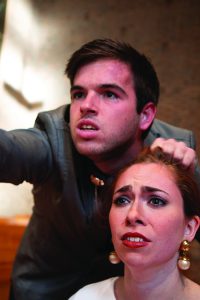 Jacob Hammill as Hamlet and Amy Kimbrough as Ophelia. Photo by David Pulliam.

Catawba College Theatre Arts will present William Shakespeare’s “Hamlet” at 7:30 p.m. Nov. 13-17 in Hedrick Little Theatre on campus.
Come and experience one of the greatest plays ever, but realize that this production isn’t like any other “Hamlet.” Director Thomas Bradley has set the production to contemporary life; this “Hamlet” is realistic. This play is very understandable for a college student who hasn’t seen the classic Shakespearean production. All audience-goers have to do is concentrate.
Perhaps the single most famous play in history, Catawba’s production of Shakespeare’s classic revenge drama “Hamlet” explores the political transition from democracy to dictatorship against the not-too-distant backdrop of the year 2028.
Staying true to the timeless struggle of young Prince Hamlet whose uncle marries his mother after the questionable and untimely death of his father, this production of “Hamlet” will deliver an evening of emotional turmoil, feigned and actual madness, and some of the best-known lines in theatrical history.
Cast members include Jacob Hammill as Hamlet, Prince of Denmark; Isaac Haney as the Ghost of King Hamlet; Randy Stull as King Claudius; Caroline Kirk as Queen Gertrude; Nunna Noe as Polonia; Kevin Kent as Laertes; Amy Kimbrough as Ophelia; Jameson Clanton as Horatio; Charlee Beth Hddock as Ros-encrantz; Jackson Chapin as Guildenstern;
Bryn Early as Voltimand; Isabella Morrison as Cornelius; Eddie Stockman as Barnardo; Miranda Sibbett as Marcella;
Rachel Makepeace as Francisca; Evelyn Castaneda Rivera as Messenger; Anna Green as Gentleman (IV.6); Eddie Stockman as Sailor (IV.6); Chandler Fields as Gravedigger; Olivia Woodall as Priest; Zoa Archer as English Ambassador; Mollie Wasserman as Fortinbras;
Donna Owens as Player 1; Robby Matlock as Player King; Katelyn Woolard as Player Queen; and Robert Parks as Lucianus.
Tickets for “Hamlet” are $15 for adults, $10 for senior adults/non-Catawba students, and free for Ca tawba students, faculty and staff members at www.catawba.edu/theatretix or 704-637-4481 2-5 p.m. weekdays.
Tickets must be purchased 24 hours in advance of a performance.