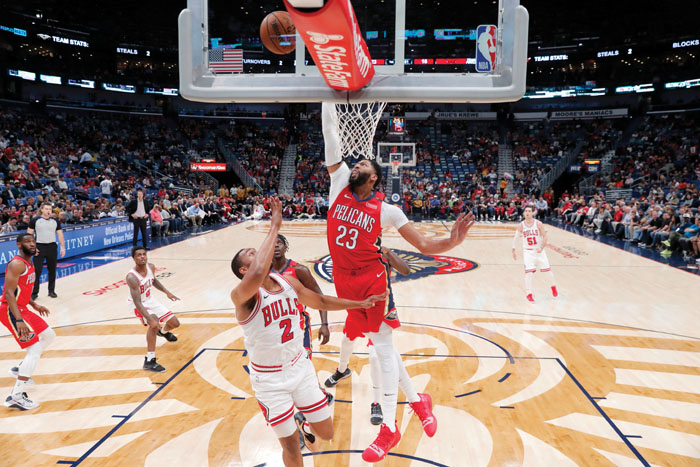 NEW ORLEANS (AP) — Anthony Davis had 32 points, 15 rebounds and four blocks in his best game since spraining his right elbow nearly two weeks ago, and the New Orleans Pelicans ended a six-game skid with a 107-98 victory over the Chicago Bulls on Wednesday night.

After missing four of his first five shots, Davis hit his next eight, including two 3s and a two-handed reverse alley-oop jam, while on his way to his first 30-plus point game since New Orleans beat the Los Angeles Clippers on Oct. 23.

Jrue Holiday had 17 points, 10 rebounds and nine assists while being guarded primarily by brother Justin. Julius Randle and Wesley Johnson each scored 12 points for New Orleans.

Zach LaVine scored 22 and Jabari Parker had 20 points and 13 rebounds for Chicago, which has dropped five of six games. Justin Holiday and Wendell Carter Jr. each had 17 points, and Carter had 11 rebounds.

Westbrook sprained his left ankle Monday, but the Thunder withstood Cleveland’s fourth-quarter run without the two-time MVP to win its sixth straight game after starting the season 0-4.

Cleveland (1-10) rallied from an 11-point deficit early in the fourth quarter to go ahead. Oklahoma City led 78-67 before the Cavaliers went on a 13-0 run. J.R. Smith and Kyle Korver each hit two 3-pointers and the Cavaliers led 80-78 with 7:02 remaining. Alex Abrines’ 3-pointer from the corner gave the Thunder the lead for good with 4:31 to play.

Wayne Ellington scored 20 points, and Justise Winslow added 16. Miami was down to an eight-man rotation for the second half because of injuries and Dwyane Wade missing the game for personal reasons.

The Heat had dropped their last nine regular-season games to the Spurs — and 11 consecutive games overall in the series, when factoring in the 2014 NBA Finals. Patty Mills had 20 points for San Antonio.

INDIANAPOLIS (AP) — Joel Embiid scored 20 points and Ben Simmons nearly had a triple double to lead Philadelphia past Indiana for its first road victory of the season.

Simmons had 16 points, 10 rebounds and eight assists to help Philadelphia end a five-game losing streak on the road. Indiana’s Victor Oladipo scored a season-high 36 points, and Domantas Sabonis had 16 points and 11 rebounds.

Mitchell also had seven assists and five rebounds, and Rudy Gobert had 17 points, 10 rebounds and four blocked shots. Alec Burks added 18 points off the bench. Utah earned its first home win of the season after opening with four straight home losses for the first time since 1974-75.

In a matchup of rebuilding clubs, Allonzo Trier finished with 16 points and Noah Vonleh had 11 points and 13 rebounds to help New York snap a two-game skid.

The Nuggets had a chance after Gasol’s foul shots, but Nikola Jokic’s 3-point attempt bounced off the rim and Denver’s rebound tip also was off the mark. Denver had won five straight.