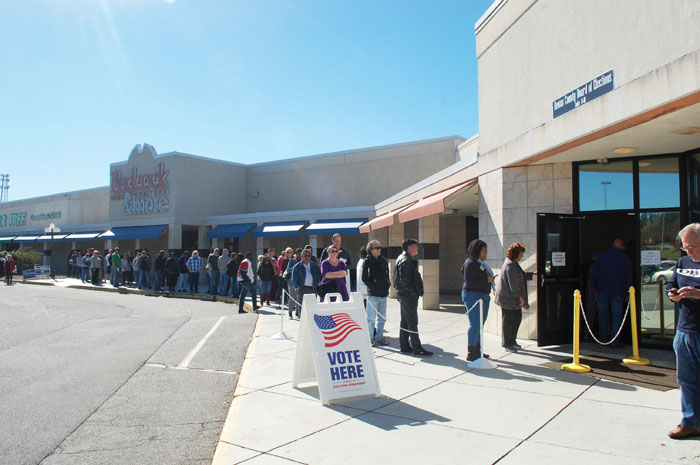 Voters line up outside of the Rowan County Board of Elections at West End Plaza on the last day of early voting in 2018. Volunteers said voters began lining up when the polls opened at 8 a.m.

About half voted early either through one-stop early voting or absentee.

“That’s very strange that it ended up being half and half,” said Nancy Evans, the Rowan County elections director.

Evans said the vote totals were impressive for a midterm election and the excitement brought out people who weren’t frequent voters.

“It’s been a challenge,” Evans said. “We had a lot of people coming out that hadn’t voted in a while and we had to deal with that, but we did end up with right now 49 percent. That was pretty good for midterm.”

“I didn’t know myself,” she said. “You just never know. This morning it just was really crazy and it kind of smoothed out. I was thinking maybe we won’t be getting up that high.”

She said there are still some votes to be counted — the absentee ballots that come in after Election Day, which will increase the ballot total.

She said all in all this election went fairly smoothly, even with using new ballot machines.

“This was the first time they used the new equipment so they had questions just to make sure what they were doing was right, but it seemed like everything worked out,” Evans said.