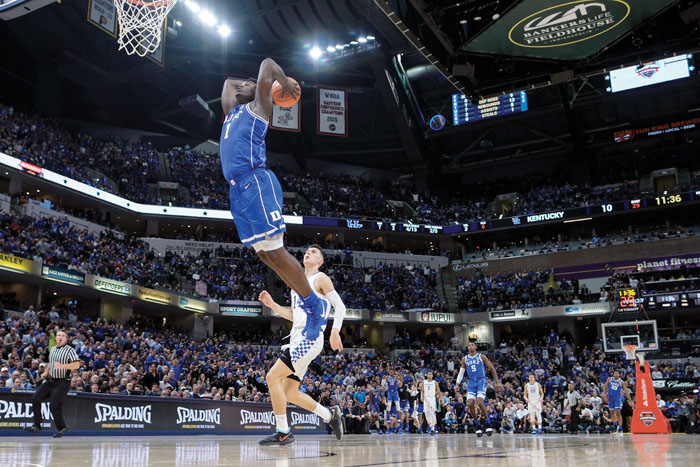 Duke forward Zion Williamson (1) goes up for a dunk in front of Kentucky guard Tyler Herro during the first half of an NCAA college basketball game at the Champions Classic in Indianapolis on Tuesday, Nov. 6, 2018. (AP Photo/AJ Mast)

INDIANAPOLIS (AP) — RJ Barrett scored 33 points and Zion Williamson added 28 in their first college games, leading No. 4 Duke over No. 2 Kentucky 118-84 on Tuesday night in the season-opening Champions Classic.

It was the most lopsided defeat in coach John Calipari’s tenure at Kentucky and marked the eighth time in 10 meetings the Blue Devils have beaten the Wildcats.

Both Barrett and Williamson surpassed Marvin Bagley III’s program record for points by a freshman in his debut at 25. Cam Reddish added 22 points and Tre Jones had six, giving Duke’s freshmen a combined 89 points.

The teams set a Classic record for most combined points, set hours earlier in No. 1 Kansas’ 92-87 victory over No. 10 Michigan State.

The highly-anticipated game between two of the nation’s most successful college programs was never close. Duke led by 10 after six minutes and extended the lead to 34-13 less than 10 minutes into the game.

The Blue Devils didn’t stop with that flurry.

Kentucky only got as close as 27 until the waning moments.

Barrett was 13 of 26 from the field while Williamson was 11 of 13 with seven rebounds.

Kentucky: It was an embarrassing performance for the Wildcats, who weren’t physical enough against Williamson and couldn’t keep up with Barrett. Most teams don’t have that kind of combination, but it’s clear Kentucky needs to improve dramatically to keep up with the nation’s top teams.

Duke: The Blue Devils seem to have it all — athletes, scorers, defenders and rebounders. Still, you can bet coach Mike Krzyzewski will try to fix his team’s flaws and make Duke an even more difficult matchup.

Kentucky: Tyler Herro was the only other player to reach double figures. He finished with 14 points, nine rebounds and five assists. … Kentucky shot 44 percent from the field but allowed the Blue Devils to shoot 54 percent. … The Wildcats were outscored 60-38 in the paint. … The game marked the first time Kentucky faced a ranked opponent in a season opener since a 79-71 overtime loss to Clemson in 1995.

Duke: The Blue Devils only committed four turnovers compared with Kentucky’s 15. … Duke improved to 12-2 all-time in Indianapolis and 3-0 at Bankers Life Fieldhouse. … The Blue Devils have won 19 consecutive openers.

Kentucky looks to rebound when it returns to Rupp Arena against Southern Illinois on Friday.

RALEIGH (AP) — There’s a lot of new pieces for North Carolina State coach Kevin Keatts to sort through in his overhauled lineup.

There’s plenty of versatility, the athleticism to get loose in tempo-quickening transition and even enough outside shooting despite starting the year with the team’s best 3-point threat sidelined by injury.

“When we get out in transition and we start playing, we can be a very good basketball team,” Keatts said.

Markell Johnson added 17 points for the Wolfpack (1-0), who have 10 new players and several transfers — including two who sat out due to NCAA rules while working out with the team all last year.

“It was a good game for us because we were able to see two different teams,” Keatts said. “And what I mean by that is we’ve had a couple of guys that haven’t played basketball in over a year and a half. … Then once we settled in, I thought we played great.”

N.C. State led just 56-46 with 13:37 left before Johnson hit a pair of 3-pointers during a 21-2 rout-creating burst, which saw the Wolfpack abruptly go from can’t-hit to can’t-miss shooting from behind the arc.

Jalen Gibbs scored a career-high 24 points to lead the Mountaineers (0-1), who trailed 40-30 at halftime.

“I thought we competed really hard for 25 minutes,” first-year Mount St. Mary’s coach Dan Engelstad said. “I thought we put a really good effort forward. I just thought we got fatigued so we’ve got to help our conditioning out a little bit. And then when that lead started to build, I think we needed to do a better job of making sure we stay together and stay the course.”

Mount St. Mary’s: The Mountaineers have 10 new players on the roster and a new coach in Engelstad, who left Southern Vermont after five seasons to take over after Jamion Christian left to become Siena’s head coach in the spring. Gibbs, who played at Drake last year, was the only player who got into much of a rhythm as the Mountaineers fell to 3-27 in season openers since moving to Division I for the 1988-89 season.

“The biggest thing right now is we’re trying to find out what we have,” Engelstad said.

N.C. State: This was just a first step (that counts in the standings, anyway) toward the process of building a cohesive unit that is ready to compete in the Atlantic Coast Conference. As with Mount St. Mary’s, there are 10 newcomers to the team. And five transfers saw action Tuesday, including C.J. Bryce (UNC Wilmington), Devon Daniels (Utah) and Samford graduate transfer Wyatt Walker in the starting lineup. Fittingly, Dorn as the team’s top returning scorer led the way in a strong start to his final season.

N.C. State made just 2 of 12 3s in the first 25 minutes. The Wolfpack went 8 of 10 from behind the arc the rest of the night in a dominating sprint to the final horn.

Not bad for a team that is missing sophomore Braxton Beverly, who is out with a broken left hand. Beverly made nearly 39 percent of his 3s last year.

“It was good for some of those guys to see the ball go in,” Keatts said. “With Braxton we’re a really good 3-point shooting team. Without him, we’re average.”

Mount St. Mary’s: The Mountaineers of the Northeast Conference visit Hofstra on Friday.

Catawba football: No matter his role, Gibson is an…