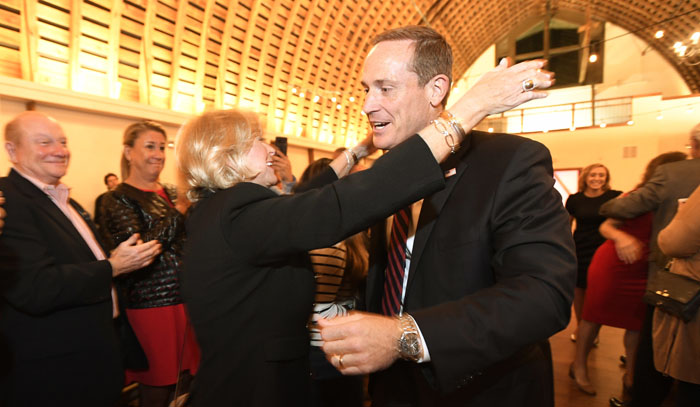 Rep. Ted Budd, R-N.C., celebrates with his supporters at his election party in Bermuda Run on Tuesday. Woody Marshall/Associated Press

By Andie Foley and Elizabeth Cook

In a race that has drawn national attention since the primary, Republican incumbent U.S. Rep. Ted Budd fought back the ballyhooed blue wave and won a second term representing North Carolina’s 13th District on Tuesday.

The 13th District includes all of Davie and Davidson counties and parts of Rowan, Iredell and Guilford.

Manning won the majority of votes in Guilford, where she lives, and for part of the evening was ahead in Rowan. In the end, Budd won the majority in Davie, Davidson, Iredell and Rowan counties. His Rowan total was 8,796 to Manning’s 8,495.

In a victory speech at WinMock in Bermuda Run, Budd said voters sent a message.

“Believe it or not, they actually like a growing economy. … They like seeing their wages grow the most in a decade,” Budd said.

Businesses are expanding and hiring so quickly that they can’t find enough workers, which means wages will go up.

“It means that the American dream is still alive,” he said.

Budd said he ran on his record as a true conservative with a small business owner’s mentality. “I’m not going to change.”

Maps have continued to fall under scrutiny since, with courts declaring the 2016 maps unconstitutional partisan gerrymanders earlier this year.

With insufficient time between the ruling and the general election to redraw maps, congressional races continued under existing maps.

Manning entered the race by force in December, raising over $500,000 in her first month of campaigning.

A Greensboro philanthropist and lawyer, she drew support nationwide throughout her campaign, as the 13th District seat was identified as one vital to flipping control of the House.

Manning said she learned from the vote how hard it is to make change.

“While the results of tonight’s election are not what we hoped, we are proud of the campaign we ran and grateful for the thousands of volunteers and supporters who took this gerrymandered district from likely Republican to a toss-up in just a matter of months,” she said on Facebook.

“We must continue working together to make this country what it can be and what it should be. Because what really makes America great is our desire to be a land of opportunity for all,” she continued. “What really makes us great is our history of setting high ideals and striving to meet them. We may stumble along the way, but we must continue to fight for what is right.”