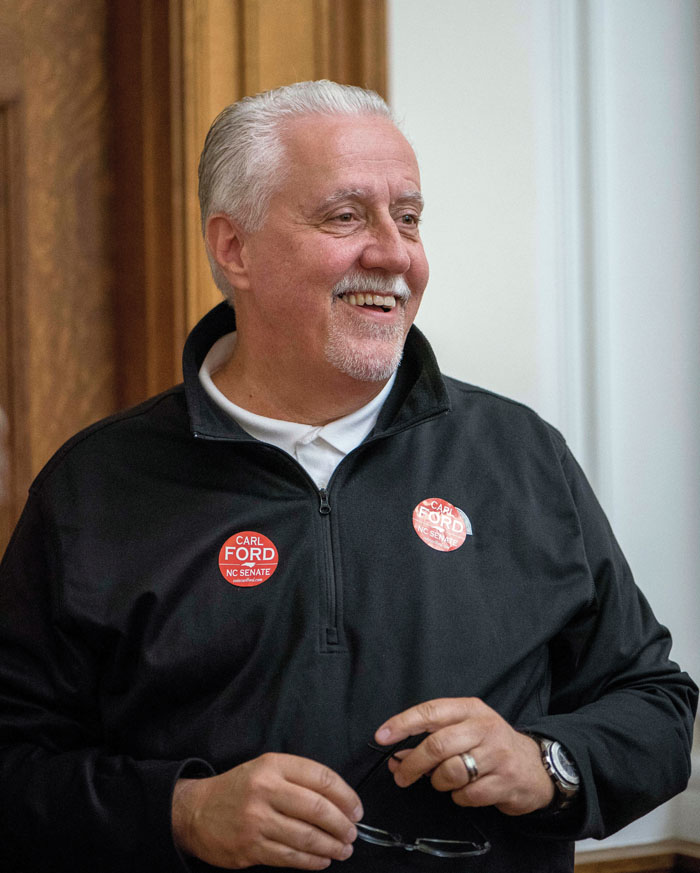 JON C. LAKEY / SALISBURY POST Republican Carl Ford is all smiles as the results of the mid-term election come in. Ford was successful in his bid for a NC Senate seat. 11/6/18

SALISBURY — It was sort of fitting that Republican Carl Ford watched the election results Tuesday at the Rowan County Administration Building.

It was there, 10 years ago, that Ford led the ticket and was elected to the Rowan County Board of Commissioners. Tuesday night, this time coming in as a three-term N.C. House member, Ford won election to the N.C. Senate.

Ford, a China Grove resident, captured the N.C. Senate District 33 seat with a convincing win over Democrat Arin Wilhelm of Granite Quarry. All of Rowan and Stanly counties now make up the redrawn District 33.

With all 64 precincts reporting after Tuesday night, Ford topped Wilhelm with 68.3 percent of the vote in the two counties. His margin was 47,057 votes to Wilhelm’s 21,823.

Ford, 61, said he spent a year campaigning in Stanly, trying to introduce himself to voters. He even attended last year’s Christmas parade in Albemarle, he said Tuesday night.

“I knew I had to get to know the people down there,” said Ford, who is the owner with his wife of Ford Broadcasting, which includes AM radio stations WRNA in China Grove and WRKB in Kannapolis.

Ford credited the 42-year-old Wilhelm, a community engagement specialist with Cardinal Innovations Healthcare, with running a clean campaign and being “a super nice guy.”

Ford, who became chairman of the Rowan County Board of Commissioners after that first election victory, went on to serve in the N.C. House for six years. This was his first try for a Senate seat.

Wilhelm is a former alderman in Granite Quarry,

On the Senate side, Ford hopes he can be assigned to familiar committees such as local government, health and transportation, “but I know it’s a different animal in the Senate,” he said.

He laughed and said despite his experience in the House, he might be a “quasi-freshman” in the Senate. He knows he won’t exactly be starting over, “but I will in a way,” Ford said.