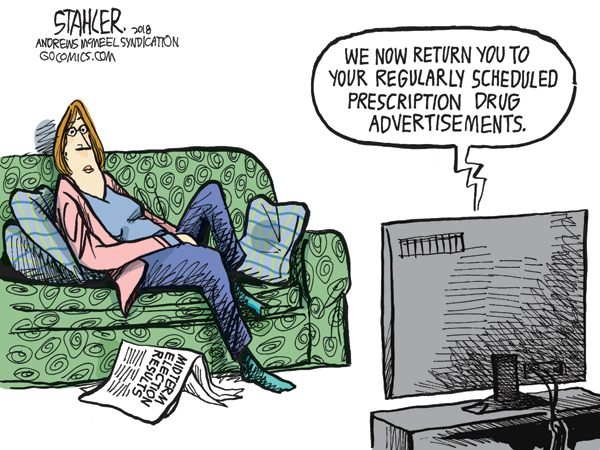 Immediate thoughts on the 2018 elections:

• A victory for voter turnout. Early voting was up 70 percent in Rowan County, reaching 23,589. After all was said and done Tuesday night, nearly 50 percent of the registered voters turned out — 47,358 out of 95,968. Loyal voters find it hard to understand why half the registered voters did not participate, but this was actually very good for a non-presidential year. Hand it to President Donald Trump; he’s good at energizing people — pro and con.

• A vote of confidence for the Rowan County Board of Commissioners. The three incumbents who ran for re-election — Greg Edds, Jim Greene and Judy Klusman — have provided solid leadership for the county over the past four years. They won their second four-year term handily. Still, give Democratic challengers Veleria Levy and Latasha Wilks credit; it takes courage to challenge the status quo. They brought up issues no one else talked about.

• Another vote of confidence for Richard Hudson. The 8th District congressman easily won his bid for a fourth term. He received 55 percent of the vote and led in five of his seven counties. He’s officially entrenched.

• A sign of relief for Ted Budd. Budd came out of nowhere to win a crowded primary in 2016, and some thought after a quiet two years in office he might be just a one-termer. Democratic challenger Kathy Manning certainly hoped so. Manning did very well in Rowan, almost matching Budd, and she carried Guilford, but the rest of the 13th District is red, red, red.

• A different atmosphere in the House. Rowan may be sending Hudson and Budd back, but there was enough turnover elsewhere in the U.S. House for Democrats to take control. It appears one-party rule is over in Washington.

• The governors have spoken. Voters had no trouble picking through the six state constitutional amendments on the ballot. Both in Rowan and statewide, the majority voted “for” amendments on hunting and fishing, voter ID, a tax cap and victim’s rights. But two amendments aimed at reducing the governor’s appointive powers got a definitive thumbs down. For that great credit should go to the state’s five former governors, a bipartisan group that actively campaigned against the amendments.

• An amen for the sheriff and DA. Kevin Auten ran unopposed for sheriff of Rowan County, as did District Attorney Brandy Cook, Clerk of Court Jeff Barger and Register of Deeds John Brindle. The lack of challengers was highly unusual. At any rate, Auten received more votes than anyone else in Rowan this year — 36,662 — followed closely by Cook with 36,510.