Catawba football: No matter his role, Gibson is an asset 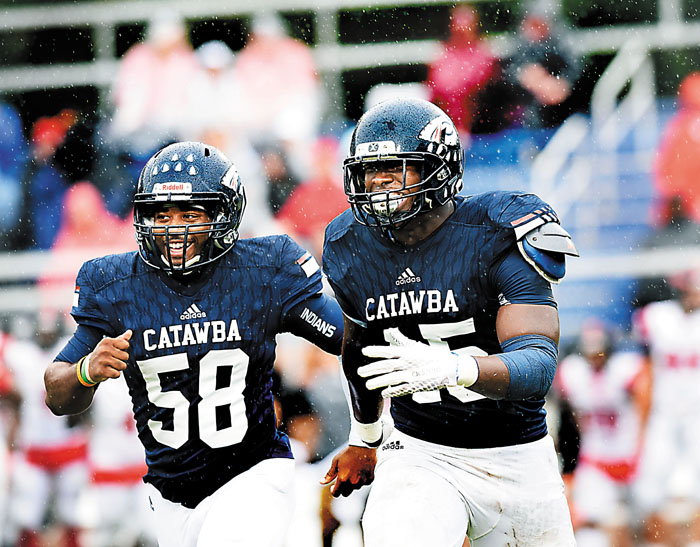 Wayne Hinshaw file photo/for the Salisbury Post .... During a game from last season, Catawba’s Eric Gibson (58) and Kyle Kitchens (45) come off the field all smiles after a recovered fumble against North Greenville. Gibson is a North Rowan High School product.

SALISBURY — Catawba head coach Curtis Walker knew when he landed North Rowan’s Eric Gibson a couple of weeks after National Signing Day in 2016 that he’d just made his program better.

That was going to be true whether Gibson ever played a down for the Catawba football team or not.

A rover who made 63 tackles for North as a senior, Gibson’s  job was somewhere between linebacker and safety. He had no clear-cut college position, but Walker took a chance on him. He knew Gibson was a local guy, a character guy, a National Honor Society guy, a guy who was going to work to get on the field and was going to work just as hard off it.

It’s getting close to three years since Gibson committed to Catawba. Both Gibson and Walker are happy with the progress he’s made. Gibson, probably a future nurse, but maybe a coach, is solid in the classroom. He’s started five games this season and has contributed in all nine.

“When we were in high school a lot of the Rowan County guys would sit around and talk about maybe playing for one of the local colleges,” Gibson said. “For most of the guys, it didn’t work out. For me, it did, and I’ve been grateful that I’ve gotten a chance to stay close to home and play at Catawba. It is something special to play for a hometown team, especially when we’re at home.”

Gibson weighed 190 when he arrived at Catawba, so the Indians looked at him first as a safety. He was fast enough in a straight line, but he still had work to do as far as changing direction.

The Indians looked at Gibson as a linebacker next. He’d made 13 tackles for loss as a North Rowan senior, so he didn’t mind sticking his nose in there against the running game.

“Linebacker is where his skill set fit best,” Walker said. “You’d like for him to be a little bigger, but he definitely will hit you. And he’s still got some skills as far as covering a receiver.”

Gibson redshirted in 2016. He made a minor contribution on the field for the Indians in 2017, playing in six games and making six tackles.

“The big thing for him was he had a chance to learn last year from two good seniors at his position in Tre Evans and Pep (Michael Peppers),” Catawba defensive lineman Jordan  Hemingway said. “They taught him a lot about being a leader. They taught him little things that help you be successful. And now Eric is one of those guys who’s going to pass on all he’s learned to the guys who come behind him. Eric brings a lot of commitment to the linebackers, to the team, to the program.”

During Catawba’s camp last spring, with that great linebacking corps depleted, Gibson, beefed up to 206 pounds, earned a starting position.

“That did feel pretty good,” Gibson said. “When I came to Catawba, there were five or six guys ahead of me, and I didn’t know if I’d ever play. But I just kept working, and tried to practice hard every day and keep a positive attitude. It all paid off. The coaches gave me a chance. Then my name was at the top of the depth chart.”

A lot of Gibson’s climb came, as Hemingway said,  from absorbing the wisdom of Evans and Peppers, both of whom are now in the high school coaching ranks.

“The college game is a much faster game than it was in high school, and I had to learn to play with my eyes more,” Gibson said. “Evans and Peppers, they broke the game down for me, and I started seeing things I hadn’t seen before.”

Gibson’s first game as a starter this season was at West Georgia. He recalls a violent collision with a running back. That was a  “you’ve arrived” moment for Gibson.

“I got up shaking my head, but then I heard a lot of loud oooohs coming from the crowd,” Gibson said. “I guess that was a pretty good hit.”

He’s sure his best game so far was at Mars Hill on Sept. 22. He was credited with six tackles and broke up a couple of passes.

But the Mars Hill game was a tough loss. So were most of the early outings. The Indians were losing. When that happens, coaches evaluate and re-evaluate everything.

One of the changes, Catawba (3-6) believed it had to make defensively was getting linebacker Jeremiah Ferguson,  a talented, 220-pound transfer from North Greenville and the team’s leading tackler, on the field for more snaps.

So Catawba rotates four linebackers now in the middle layer of a 4-2-5 defense. Ferguson and veteran L.J. Melvin play the most, with Gibson and Adam Rowson also getting some action. Gibson started the recent home game with Limestone, but that was his only start in the last month.

“The great thing about Eric is that while his role changed some on the field, his leadership continues in the weight room, the classroom, the practice field and on the sideline,” Walker said.  “He wants what’s best for Catawba. If Ferguson is on the field, Eric is doing everything he possibly can to help Ferguson.”

Gibson can’t be thrilled about not getting as many snaps,  but he doesn’t complain and handles it maturely.  He’s smart enough to know that he’s good, but Ferguson is close to great, and has to play.

“What matters is that the linebackers, no matter who is on the field, keep playing at a high level,” Gibson said. “I’ve tried to keep the same attitude every day, whether I’m first team or fifth team. That’s who I am. That’s who I’ve always been.”

Gibson and all the Indians face a big challenge at Lenoir-Rhyne (9-1) at 2 p.m. this Saturday.

Catawba will be home against UNC Pembroke on Nov. 17 to finish the season.