Salisbury soccer blanks Patton, 3-0, in 2A second round 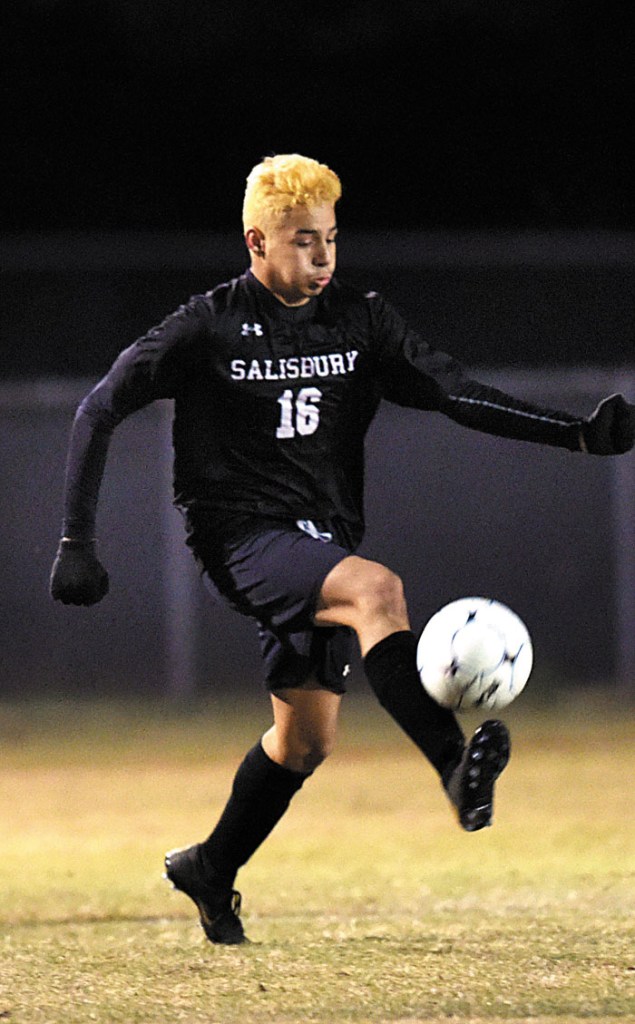 SALISBURY — The conditions called for winning ugly — and ugly, the Salisbury boys soccer team can do.

At least, the third-seeded Hornets did it better than visiting Patton in the second round of the 2A state playoffs Tuesday night.

“Sure, the field conditions were most definitely a factor,” tireless coach Matt Parrish said, moments after Salisbury scored three first-half goals and prevailed, 3-0. “We knew it would likely be a tale of two halves — and we’d have to attack on one bad end, the quagmire. We wanted to attack the dry side in the second half, when the clock was ticking down, and it worked to our advantage. It seemed we were more assertive, as if we were unafraid to slip or make a mistake. And maybe they were more tentative because of the footing.”

“We have some speed up top,” he said after the 19th-seeded Panthers (14-10-1) closed up shop with three losses in their last four matches. “But I think the field got into our heads at the beginning. The amount of mud down that one end was more than we expected. Trying to defend it, we just didn’t start real fast.”

The Hornets (22-2-1) did. They used weather-assisted goals by freshmen Brayan Avilez and Christopher Portillo to go ahead 2-0 in the first 10 minutes. Avilez took a feed from teammate Tony Figueroa and steered a shot past Patton keeper Manual Guzman to open the scoring in the fourth minute.

“The ball came in to Tony and he passed it to me,” said Avilez, providing a battlefield re-enactment. “I took a step, touched the ball and curved a shot into the bottom right corner. The goalkeeper didn’t see it coming.”

It was Avilez’s third goal of the playoffs — and third of the season. Portillo helped Salisbury nourish its lead moments later when he fired a 15-yard shot past Guzman.

“I cut into the 18, found some space and took the shot,” he said. “Right side. It was still early, but it felt like we had the game won. We just had to keep up our intensity.”

Portillo tallied his second goal of the night — and eighth of the season — with 9:12 remaining in the first half when he scored off a scramble on the front porch.

“When tryouts happened and I didn’t know about either Pollo or Chris, it didn’t take long to figure out that they were something special,” Parrish said. “I think we’re looking at four years of awesomeness. I mean, all three goals came from freshman. All the assists came from freshman. I don’t know what (Scott’s) scouting report said, but I’ll bet that wasn’t it.”

“They had a prime striker who was very fast,” Fisher said after SHS outshot the guests, 11-5. “The (coaching staff) warned me that they liked to play long balls up and over the defense for him to catch up to, so I just tried to stay one step ahead of him.”

“We weren’t getting up and giving him support,” Scott said. “He was sort of isolated, on his own. Saturday night our combinations were much better.”

Parrish couldn’t help but gush over Fisher and Salisbury’s defensive irritants in the backfield.

“Big games bring out the best in big players — and Jack Fisher was tremendous,” he cooed. “That’s not an easy task. When you have a guy that’s just as big as you are, just as strong as you are probably a little faster than you — and I say, ‘Hey, he’s yours,’ — that’s a tough night. All we heard was the kid likes to bang and if he can’t, he’ll run right by you. Jack did an excellent job slowing down the attack.”

“As far as reactions, I had to be really active and come off my line a lot,” he said. “I even had to truck a few guys. I win the 50-50 balls. They’re the ones that usually end up on the ground.”

Not surprisingly, Salisbury has shoehorned itself into the third round, where it will host North Davidson on Thursday.

“I expect a lot from this team,” said Faulkner, who was involved in a minor car accident after school yesterday. “We’ve already done a lot of things and know we can accomplish a lot more.”