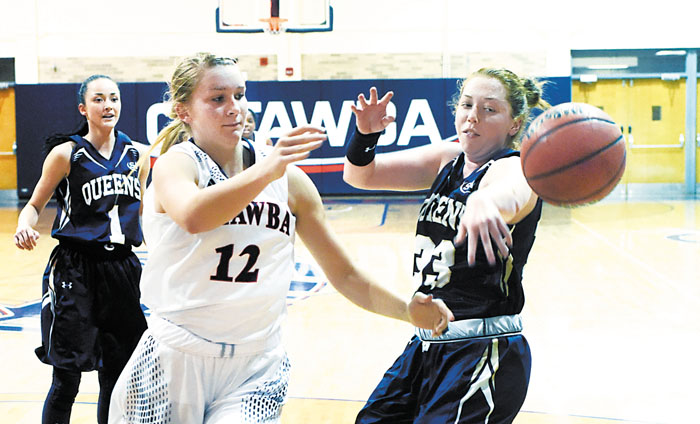 It also provided the sort of motivation on which no price tag can be placed.

“They picked us eighth, and I’m pretty happy about that,” Baxter said. “They think Catawba women’s basketball went out the door with Coach (Angie) Morton.”

It’s not like Catawba has been racking up championships in recent seasons, but Morton, who resigned last August, was a steady winner for 15 years. Catawba has been an upper-middle program in the SAC for a long time. The Indians were 9-9 in 2010-11. Since then they’ve had a winning record in the league every season. Baxter contributed for five seasons as an assistant before his promotion.

Catawba (14-14 overall) tied for fourth in the SAC in 2017-18, so a plunge to eighth doesn’t seem likely, even with stellar post player Terri Rogers and clutch guard Serena Brown moving on.

“When you’re picked eighth, they’re saying you’re only better than three teams in the league,” Baxter said. “But I think we’re going to be pretty exciting. Young, but exciting.”

A 79-55 exhibition loss at D-I UNC Wilmington did nothing to dampen Baxter’s enthusiasm.

“The first quarter, we were excited and we were fouling, and it was a parade to the free-throw line for them,” Baxter said. “They scored 32 in the first quarter, 20 at the foul line. But the last three quarters, once we’d gotten past all that D-I vs. D-II stuff, we played with them. The last three quarters, it was 47-42. That was encouraging. UNC Wilmington has a lot of seniors.”

Catawba’s standouts this season probably will be sophomores. Forward Taisha DeShazo (7.1 points per game) and 6-foot center Talia Barnes (5.3) are talented. They weren’t as good as Rogers and Brown last season, but they showed that, in time, they might be. They are athletic. They led Catawba’s scoring at UNC Wilmington, and the Indians will need them to be in double figures every night.

Junior guard Madison Hallman (6.8) is smart and is a streaky shooter who can take over a game. She was a fantastic high school player at East Davidson, but she’s steadily battled injuries since arriving at Catawba. She’s still dealing with foot issues.

“She’s got the ability to be all-conference if we can get her healthy,” Baxter said. “We’re working on it. She’s not able to practice much, and that’s tough on her.”

The only senior on the roster is guard Elizabeth Webb. She’s a shooter, third on the team in 3-pointers last season, behind Brown and Hallman.

Baxter predicted that the biggest surprise will be sophomore Anna Gardner. She played little last season, but she made two 3-pointers in the UNC Wilmington exhibition.

Sophomore Shemya Stanback, a pass-first point guard from A.L Brown, brings a lot of speed to the table and is going to be important because Baxter wants the Indians to play faster than in recent years. Stanback isn’t a shooter, but her quickness creates havoc on defense.

Baxter expects additional defensive energy to come from Marissa Bruce, a transfer from USC Aiken who was an important player for the Pacers as a freshman. She started 16 games, with positive results, averaging 8.7 points and 4.9 rebounds.

Guard Jada Davie played on the Gastonia Ashbrook powerhouse that was 30-0 before it ran into Northern Guilford in a 3A semifinal.

Ford is currently sidelined by an injury, but is expected to be ready at some point in December.

Catawba starts the regular season Nov. 9 and 10 on the road. The Indians will head to Tigerville, S.C., to play North Greenville and Erskine.

Baxter is excited — and ready to surprise some people.

Carson-Newman, 32-3 last season, is picked to repeat as SAC champ, with Wingate second and Anderson third.