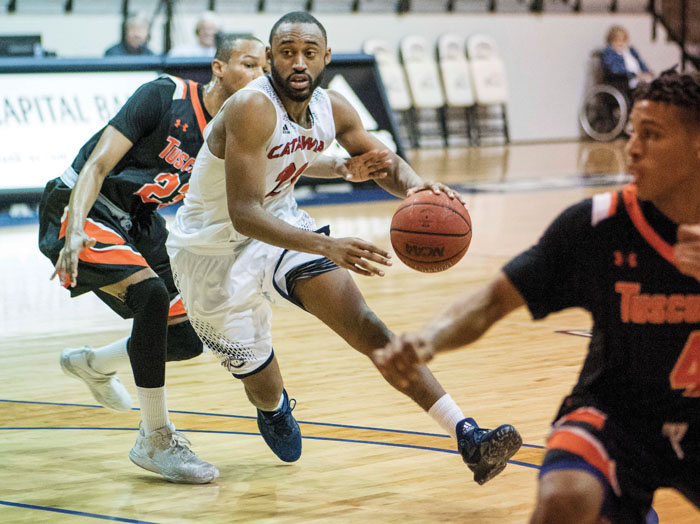 To say the least, it was a good showing. Catawba was tied with the Shockers with eight minutes left.

“There were a lot of positive things,” Catawba head coach Rob Perron said. “We were playing in front of 10,000 people, great atmosphere, but we weren’t afraid. We guarded people. Every time they got up, we responded, until that eight-minute mark. That’s when they hit a step-back 3-pointer and then a fadeaway 3, and that time we didn’t respond. But, all in all, a very cool trip for our guys.”

The next step for the rejuvenated program is this weekend’s Men’s Basketball Tip-Off Fundraiser on Nov. 9-10.

The plan is for this to become an annual event.

“It’s a chance to bring in our alumni and our parents for a great weekend,” Perron said. “They’ll get to see us play twice and they’ll get to hear a great speaker.”

Saturday’s activities include a 10 a.m. brunch at the Peeler Crystal Lounge, followed by the tip-off fundraiser luncheon at 11 a.m. Dr. Karl Hales will be the master of ceremonies. Bobby Lutz will be the keynote speaker.  The cost is $50 per person.

“Coach Lutz has seen basketball at all levels, big-time basketball and D-II basketball,” Perron said. “His credential speak for themselves.”

Born in Hickory 60 years ago, Lutz is a graduate of Bandys High and UNC Charlotte. He got his start as a high school coach at Parkwood High in Monroe and Bunker Hill in Claremont.

He broke into the college ranks as a Clemson assistant in 1984.

That led to runaway success as the head coach at Pfeiffer (1986-95), where he would take six straight teams to the NAIA tournament and three to the Final Four. His 1994-95 Pfeiffer team was national runner-up.

He became head coach of the Charlotte 49ers in 1998. In 12 seasons, he had 218 wins. He coached five teams in the NCAA tourney and three more in the NIT.

More recently, he made an impact in a long stint as an assistant coach at N.C. State.

Following the fundraising meal, the Indians will prepare to play UNC Pembroke at 2 p.m. Coming off a record-setting, 27-win season, UNCP is the preseason favorite in the Peach Belt Conference. The Braves lost by 18 at Ohio State last week.

Catawba was only 11-15 last season and is picked sixth in the South Atlantic Conference, but is expected to be much improved. The Indians are healthier, taller and deeper. They have impact transfers and lots of new faces.

“We’ve gotten a lot of guys back who were sitting out,” Perron said. “Now we’re getting to coach the team we thought we were going to be coaching last season, and we’ve also added a good recruiting class. With so many guys coming back, it’s almost like we’ve added two recruiting classes.”

Veterans Jameel Taylor and Malik Constantine combined for 33 points at Wichita State. They should have plenty of help this season.

Contact Jeff Childress at 704-637-4265 or jchildre@catawba.edu for information about the fundraising weekend.