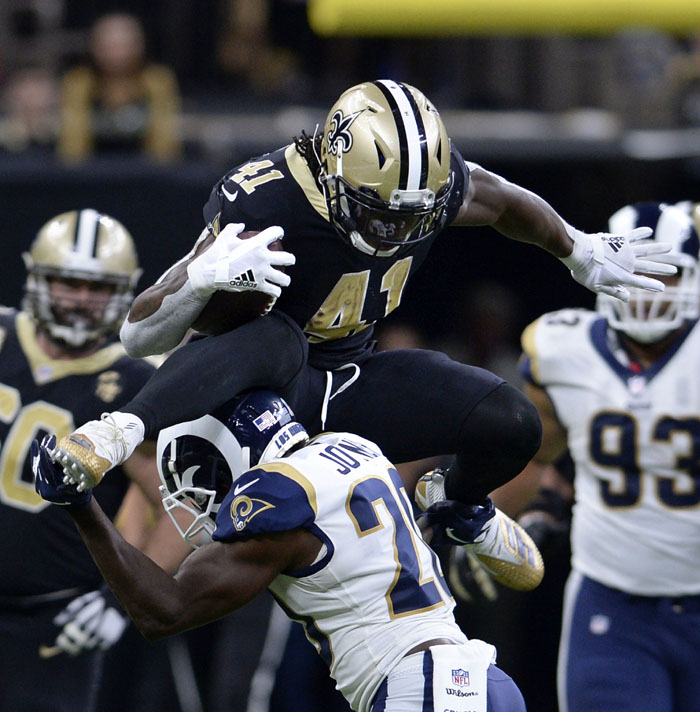 NEW ORLEANS (AP) — Michael Thomas caught a late 72-yard touchdown reception and then celebrated with a cellphone in a throwback to another famous New Orleans play, and the streaking Saints handed the Los Angeles Rams their first loss of the season with a 45-35 win on Sunday.
Drew Brees passed for 346 yards and four touchdowns in New Orleans’ seventh straight win, and Thomas finished with a club-record 211 yards receiving. But what happened after their last connection of the day really stole the show in a wild shootout between two of the NFL’s best offenses.
Thomas’ long TD came on a pivotal third-down play with about four minutes to go, when the Rams seemed to expect the Saints to run a play closer to the first-down marker. Thomas ran free behind Marcus Peters, caught Brees’ long throw virtually in stride and ran straight to the goal post, where he got out an old-school flip phone — reminiscent of Joe Horn’s Sunday night TD celebration in 2003.
Thomas, who caught 12 passes, eclipsed Wes Chandler’s club record of 205 yards receiving against Atlanta in 1979.
New Orleans running back Alvin Kamara scored three times, twice on runs and once on a 16-yard catch-and-run — all in the first half.
The Rams (8-1) very nearly pulled off an extraordinary comeback in the Superdome, where the crowd was revved up after New Orleans (7-1) raced to a three-touchdown lead late in the first half.

PATRIOTS 31, PACKERS 17
FOXBOROUGH, Mass. (AP) — Tom Brady threw for 294 yards and a touchdown, and James White ran for two scores to lead New England past Aaron Rodgers and Green Bay.
The Patriots improved to 7-2 with their sixth straight victory.
Rodgers completed 24 of 43 passes and two touchdowns in his second career matchup with Brady.
It was 17-all late in the third quarter when Aaron Jones fumbled for Green Bay (3-4-1).
New England receiver Julian Edelman hit White on a 37-yard catch-and-run to set up White’s second score, a 1-yard run. On the Patriots next possession, Brady connected with Josh Gordon for a 55-yard TD.
Gordon caught four passes for 115 yards.

TEXANS 19, BRONCOS 17
DENVER (AP) — Brandon McManus missed a 51-yard field goal as time expired, leaving Demaryius Thomas a winner in his homecoming and Houston escaped Denver with a win.
The Texans (6-3) won their sixth straight and the Broncos (3-6) lost for the sixth time in seven games.
Thomas finished with three receptions for 61 yards, but two of them were back-to-back for 31 and 18 yards on the Texans’ opening touchdown drive.
McManus’ second miss of the game came after Case Keenum completed an 18-yard pass between two defenders to Emmanuel Sanders on fourth-and-8 from the Denver 45-yard line.
Keenum threw a 5-yard pass to tight end Jeff Heuerman, who had a career-best 10 catches for 83 yards and then running back Phillip Lindsay lost a yard.
After Denver called a timeout with 3 seconds left, the Texans did the same, then rushed the field in relief after McManus’ kick drifted wide right.

CHARGERS 25, SEAHAWKS 17
SEATTLE (AP) — Philip Rivers made his 200th consecutive start and kept Los Angeles surging at the midpoint of the season, surviving a late rally by Seattle’s Russell Wilson.
Rivers threw for 228 yards and two touchdowns, Melvin Gordon added 113 yards rushing and the Chargers won their fifth straight with a 25-17 win over the Seahawks on Sunday.
Rivers threw touchdown passes of 12 yards to Tyrell Williams and 30 yards to Mike Williams, and let the Chargers defense stymie Russell Wilson until the final minutes. Seattle had won four of five following a 0-2 start.
Desmond King provided the deciding points for Los Angeles (6-2) by stepping in front of Wilson’s pass for David Moore and returning it 42 yards for a touchdown with 6:44 remaining to give the Chargers a 25-10 lead.
Wilson managed to make the final minutes nervous for Los Angeles.
Wilson hit Nick Vannett on a 6-yard TD with 1:50 remaining to cut the Chargers’ lead to one score. Seattle got the ball back with 1:24 left at its own 22 and after two completions and a roughing the passer penalty on Melvin Ingram, the Seahawks were at the Chargers 44 with 50 seconds left. Wilson scrambled for 16 yards to the Chargers 28 and, after a spike, Seattle had 30 seconds left.
Seattle (4-4) got a break when Michael Davis was called for pass interference in the end zone on the final play of regulation against Tyler Lockett, putting the ball at the 1 for an untimed down. Seattle’s J.R. Sweezy was called for false start backing the play up to the 6, and Wilson’s final attempt for David Moore in the back of the end zone was partially tipped by Jahleel Addae and fell incomplete.

STEELERS 23, RAVENS 16
BALTIMORE (AP) — James Conner rushed for 107 yards and caught a TD pass for the Steelers (5-2-1), who have won four straight since falling to the Ravens at home on Sept. 30.
Roethlisberger went 28 for 47 for 270 yards. His 1-yard run put Pittsburgh up 20-6 in the third quarter, and the 36-year-old showed his grit by missing only one play after being flattened during a sprint from the pocket with just over 13 minutes left.
The Ravens (4-5) scored only one touchdown in their third straight defeat. Joe Flacco was limited to 209 yards passing and sacked twice.
Pittsburgh opened the second half with a drive that lasted nearly seven minutes and ended with a 1-yard plunge by Roethlisberger. The conversion sailed wide to the right, keeping the score at 20-6.

CHIEFS 37, BROWNS 21
CLEVELAND (AP) — Patrick Mahomes passed for 375 yards, threw three touchdown passes — two to Travis Kelce — and continued the best start by an NFL quarterback in 68 years as Kansas City’s impossible-to-handle offense kept rolling with a win over the Browns, who played their first game since coach Hue Jackson’s firing.
Kareem Hunt had two scoring runs and one receiving for the Chiefs (8-1), who came in averaging 36.3 points per game with an offense overloaded with weapons for Mahomes.
The 23-year-old used all of them in winning his first pro matchup against Baker Mayfield and the Browns (2-6-1).
Mahomes and Mayfield didn’t match their epic college meeting in 2016, when they combined for more than 1,700 yards in offense. But the Chiefs put on another impressive offensive show with 499 total yards, averaging 8.6 per snap.
In his second season, Mahomes, who made just one start as a rookie, already has 29 TD passes and 3,185 yards, the most by any QB through 10 games since 1950. He has passed for at least 300 yards in eight straight games.

VIKINGS 24, LIONS 9
MINNEAPOLIS (AP) — Danielle Hunter had 3½ of Minnesota’s franchise-record 10 sacks and a fourth-quarter fumble return for a touchdown, making for a miserable afternoon for Matthew Stafford and the Lions.
Hunter, the fourth-year defensive end, also was credited with nine tackles and four quarterback hits as the Vikings (5-3-1) limited the Lions to 214 total yards.
The Lions had a streak of 25 consecutive games with at least 14 points stopped in humbling fashion.
Starting a stretch of three straight NFC North games with a badly needed win before their bye, the Vikings beat the Lions (3-5) at home for the first time in three matchups at U.S. Bank Stadium.

DOLPHINS 13, JETS 6
MIAMI GARDENS, Fla. (AP) — Rookie linebacker Jerome Baker intercepted Sam Darnold and scored the only touchdown on a 25-yard return with 11 minutes left, and a resilient defense helped the Dolphins beat the Jets.
Darnold threw four interceptions and took four sacks, and the Jets went 2 for 13 on third down.
The hobbled Dolphins (5-4) endured another wave of injuries, but their defense was much improved after three consecutive poor games, with the quality of the opposition certainly a factor.
Darnold tried to rally his sputtering team from a 6-3 deficit, but following a punt he took a high snap and made an ill-advised throw to tight end Eric Tomlinson. Baker stepped in front for his first career interception and scored untouched.
T.J. McDonald and Walt Aikens made interceptions to end the Jets’ final two possessions.
The Jets (3-6) lost their third in a row and have scored 33 points during the skid. They’ve dropped nine of their past 10 road games dating to 2017.

BEARS 41, BILLS 9
ORCHARD PARK, N.Y. (AP) — Jordan Howard scored two touchdowns and the Bears’ defense had two others in a win over the Bills in what proved to be another comedy of errors for Buffalo and its anemic offense.
Eddie Jackson scored on a 65-yard fumble return and Leonard Floyd returned a tipped pass 19 yards for another score some 3 1/2 minutes apart in the second quarter. Howard, set up by Tarik Cohen’s 38-yard punt return , then scored on an 18-yard scamper to cap a run in which the Bears scored four touchdowns over a span of 12 minutes, 20 seconds in the second quarter.
The Bears won their second in a row and improved to 5-3 to match their best start to a season through eight games since 2013. Chicago also matched its win total from last year.
Chicago’s defense forced four takeaways, and limited the Bills to 264 yards offense despite missing star linebacker Khalil Mack, who missed his second straight game with an injury to his right ankle.
The Bills continued their bumbling ways in dropping to 2-7. It’s Buffalo’s worst start since winning one of its first nine games in 2010.

FALCONS 38, REDSKINS 14
LANDOVER, Md. (AP) — Julio Jones ended his 12-game touchdown drought, Matt Ryan threw for 350 yards and four scores and the Atlanta Falcons flexed their offensive muscles with a blowout of the Redskins that extended their winning streak to three games.
Jones caught seven passes for 121 yards with the biggest coming on a 35-yard screen pass with just under four minutes left that sealed the victory. After Jones twisted away from newest Washington defender Ha Ha Clinton-Dix and into the end zone, a swarm of teammates rushed over from the sideline to celebrate Jones’ first touchdown catch since Nov. 26, 2017.
Ryan completed 26 of his 38 passes, including touchdown passes of 39 and 10 yards to running back Tevin Coleman and 40 to rookie receiver Calvin Ridley. Coleman ran for 80 yards and Ito Smith had 66 yards and a rushing touchdown to give the Falcons (4-4) the balanced attack they’ve lacked in an injury-marred season that so far has failed to live up to expectations.
The NFC East-leading Redskins (5-3) could blame poor tackling, ill-timed penalties and a series of injuries along the offensive line for the end of their three-game winning streak.