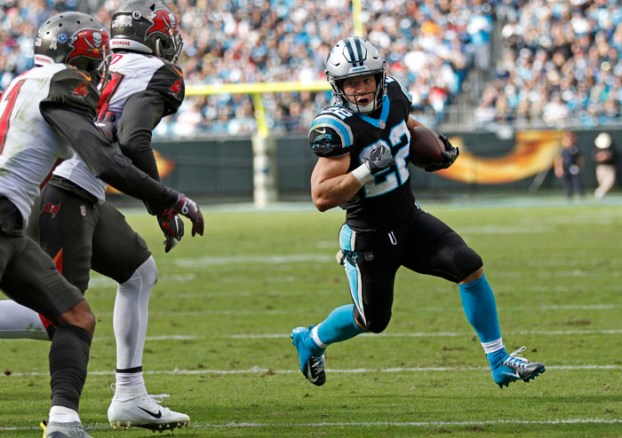 CHARLOTTE (AP) — Cam Newton can’t keep from grinning when he looks around at the playmakers that surround him in the Panthers’ locker room.
“The talent level we have on this team is extremely scary,” Newton said.
The Panthers proved that again Sunday.
Newton completed 19 of 25 passes for 247 yards and two touchdowns, running back Christian McCaffrey racked up 157 total yards and scored twice and second-year wide receiver Curtis Samuel scored on a 33-yard double reverse and hauled in a 19-yard TD catch midway through the fourth quarter to seal Carolina’s 42-28 win over the Tampa Bay Buccaneers on Sunday.
The Panthers (6-2) are on a roll midway through the season, scoring 99 points in the last nine quarters.
They have wide receivers that can run the ball, running backs that can catch, a big body receiver, a third-down receiving specialist, one of the best pass-catching tight ends in the league and, of course, a one-time league MVP at quarterback who can do it all.
Those weapons were all on display in the first half as the Panthers scored touchdowns on five straight possessions to build a 35-7 lead en route to their 10th straight win at home.
Even a little “Fitzmagic” wasn’t enough for the Buccaneers (3-5).
Ryan Fitzpatrick, who started in place of the turnover-prone Jameis Winston, finished with 243 yards passing and four touchdowns — two each to Adam Humphries and O.J. Howard — and led the Bucs back to within 35-28 in the fourth quarter before running out of steam.
Fitzpatrick threw two costly interceptions — one on the game’s second possession which led to Carolina’s first touchdown, and other late in the fourth quarter that sealed the Bucs’ fate.
“We know we have the talent, it’s just we can’t keep digging ourselves in these holes, especially on the road,” Fitzpatrick said.
The deficit — and Carolina’s offensive firepower — proved too much.
Tight end Greg Olsen called the versatility the Panthers now have on offense with players like McCaffrey, Samuel and D.J. Moore is unlike anything he’s seen since his arrival in Carolina in 2011.
“We have guys who are so explosive, so dynamic and so good in the open space,” Olsen said. “We can give them balls on handoffs, throw it to them all — they’re very unique in that regard. I don’t know what we have had this many guys who are that dynamic with the ball in their hands.”
That was evident throughout.
McCaffrey leaped a defender on a reception in the flat and kept going, racing 32 yards for a first down. Samuel’s 33-yard TD on the reverse included the speedster reversing field and running a combined 103 yards , according to NFL’s Next Gen Stats. And Olsen, the cagey veteran, hauled in a one-handed catch in the end zone — his third TD in three weeks.
“We were playing with momentum and when you’re playing like that, we have a lot of juice coming our way so it does make it very fun,” McCaffrey said.
Said Newton: “When it’s clicking, it’s clicking.”

BREAKING THE PATTERN
Bucs coach Dirk Koetter is eager to find a solution for his team, which seems to be stuck in a repeating pattern.
“We go out, we get behind, we get killed in the second quarter, then rally like (heck) in the third quarter and then everybody thinks we’re back in it and then we fade off at the end,” Koetter said. “That’s definitely the pattern that we’re in. If I knew one thing to fix it I’d do it right now, but I don’t know what that is.”

ADDISON TURNS IN TRIFECTA
Panthers defensive end Mario Addison had a big game with three sacks to raise his team-leading total to 7½.
“I’m a pretty strong guy,” said the 6-foor-3, 260-pound Addison. “People underestimate me because I look kind of small but I pack a punch. By the time they miss and my hands get on the inside of them, I’m running them back and they’re like ‘Dang, this guy’s stronger than I thought.'”

SLAMMING THE DOOR
The Panthers have been touting James Bradberry as their shutdown cornerback and he did quite a number on Tampa Bay’s Mike Evans, who finished with one catch for 16 yards despite being targeted 10 times.
Panthers coach Ron Rivera called Bradberry’s defense “as solid as it gets.”

THIEVES AVENUE
The Panthers secondary is coming up with big turnovers this season. Carolina has 11 interceptions at the midway point of the season after just 10 picks last season. Jackson, a rookie, has four of them.
“The secondary is shaping up nicely and the more they play together the more chances they will have,” Rivera said.

INJURIES
Buccaneers: None reported.
Panthers: Reid left in the fourth quarter with a shoulder injury, but returned to the game.

UP NEXT
Buccaneers: Host Washington on Sunday.
Panthers: Play four of their next five games on the road, beginning Thursday night at Pittsburgh.

NEW ORLEANS (AP) — Michael Thomas caught a late 72-yard touchdown reception and then celebrated with a cellphone in a... read more