John Hood: What to do if you lose 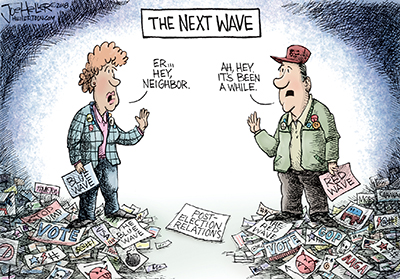 RALEIGH — As I write, the results of the 2018 midterm elections are not yet known. It’s possible that the long-predicted blue wave will wash away GOP majorities in Washington and at least the supermajorities Republicans enjoy in the North Carolina General Assembly.

Alternatively, perhaps Republican and GOP-leaning voters will rally — joined by swing voters breaking rightward late — and Democrats will underperform expectations to such an extent that Republicans are relieved.

My observations, then, are truly meant to apply to either scenario.

If you find yourself on the losing end of the 2018 midterms, please consider the following suggestions as offering potential benefits for yourself and for our republic as a whole.

First, while mourning a disappointing cycle is inevitable, don’t wallow in grief or yield to persistent bitterness. It’s probably not the first time a political result has disappointed you, and it certainly won’t be the last. While every election is important, the repeated claim that “this election is our last chance to avoid disaster” is more hysterical than historical.

After the 1992 elections, triumphant Democrats proclaimed that with Baby Boomers finally assuming the reins of political power in America, the Reagan-era GOP coalition was no more. Two years later, that coalition roared back to capture both houses of Congress for the first time in nearly half a century, as well as dozens of governorships, legislative chambers and other state and local offices. Two years after that, in 1996, the resurgent Republicans failed to defeat Bill Clinton for reelection, then lost ground in the 1998 midterms.

Partisan fortunes continued to ebb and flow. After the 2004 elections, triumphant Republicans proclaimed a new majority. Two years later, they took it on the chin in the midterms, then saw Barack Obama elected in 2008. Now, indeed, was the GOP truly finished? Nope. A massive red wave built over the next two years. Rinse, repeat.

By now, it should be obvious that a single election cycle It can lead to major shifts in public policy and make or break individual politicians. But another cycle comes around soon enough.

My second suggestion is to focus on that next election. It will present you with many new opportunities. And one of the (perhaps few) saving graces of a “down” cycle is that it often produces useful lessons. You find out which candidates looked better on paper than they ended up looking to voters. You find out which messages resonate and which ones flop. Choose to learn, not to burn with righteous indignation.

Third, you should resist the temptation to delegitimize the results of an electoral loss unless you have compelling evidence of massive criminal wrongdoing. If the other side raised and spent more than your side did, or got more favorable media coverage, or benefitted from favorable district lines, or had better luck, these might be valid explanations for your loss. They are not, however, excuses to launch cynical attacks.

Although you may strongly disagree with the views and priorities of victorious politicians against whose election you worked, keep in mind that they believe their public service — for which they will likely sacrifice personal time, income, privacy, or all of the above — will advance the public good as they see it.

You can disagree strongly with your political rivals without demonizing or wishing misfortune on them. Just as they should avoid being obnoxious winners in the coming months, you should avoid being a sore loser. Next time around, the results could be reversed. How would you like to be treated in that case? This is always a good rule to follow. One might even call it golden.

‘Sully’ Sullenberger: We saved 155 lives on the Hudson…