Clyde, Time Was: Life revolved around the kitchen table 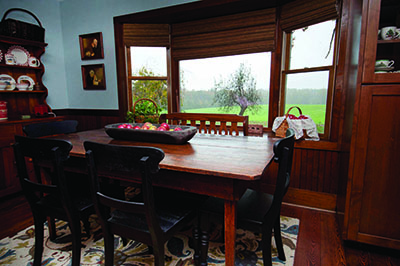 The kitchen table at Darryl and Barbara Corriher's restored farmhouse, which was on a home tour in 2015. Post file photo

Time was, we sat around the kitchen table. We only went into the dining room to eat.

A warm kitchen was the center of all activity and the cookstove was our lives, what with bread rising, the hot water reservoir, liver mush sizzling in lard in the Wagner skillet and clothes drying behind it.

“The Hebrews, in the time of our Lord, had adopted the Roman custom of reclining at table, resting themselves on the left arm. The tables were in three portions, forming three sides of a square, the seats being placed along the outer sides, and the servants waiting in the inside.”

No one said “go git it yourself.” No one turned the tables. Victorians used a center table for the lamp, reading, writing or having tea and crumpets with parlor games. Nowadays, we look at the walls and screens, usually alone.

Obsessive compulsives wouldn’t last long with a table full of all the jars, cans, utensils and leftovers sitting around. Nobody said put everything away. “Whose turn to do the dishes?” No outside animals sat under the table waiting for a dropped morsel. No carpetbaggers, only kinfolks or close friends were allowed to join the circle, sometimes uninvited. “Hurry, set another place at the table.”

The oilcloth covered the old wooden farm table and we had napkins but chose not to use them.

A butter knife was a necessity, as was a long ice tea spoon to stir in the sugar. A sugar spoon was kept in a spooner with the other Rogers silverplate. The monogramed sterling was in a chest in the hall for company.

The pressed cake of butter out of the mold and sorghum molasses stayed on the table indefinitely, along with the cornbread from lunch, all covered with a cloth; no Tupperware, Saran Wrap, straws, or Styrofoam. How did we survive?

Home cooked meals are a luxury we can no longer afford or take time to prepare. When we do, it’s a mix, a shortcut or pre-baked, just brown and serve, oven-ready.

Sweets were for Sunday. Sundae, 1903 alteration of the word.

Dessert, from the middle French desservir, to clear the table, with origins in Latin des + servir, to serve, with a dessert spoon of course and, if you so desirem a dessert wine. A dessert spoonful is by measure 2.5 fluid drams.

The porcelain kitchen table served as the counter for mixing up batter with a pound of butter, flour and sugar for the perfect pound cake. The same table served as a doctor’s office for minor surgery on knees and elbows or splinters in feet or hands.

Between meals the kitchen table, Latin tabula or board, became the game room, with Monopoly, Parcheesi and Rook, rummy and any card game you could make up. It was the study hall for afternoon homework, where the answers were nearby. It was the flat surface for puzzles that had to be moved or framed when the 1,000 pieces were found. It was the arts and craft store with tempera paint and glitter, Easter eggs and dye, or still-life charcoal sketches. You could even stand on it to change a light bulb or reach the top shelf. It was the sight of many discussions pro and con. The last word was not on Google.

Isn’t that right, honey? “Whatever you say dear.”

Some subjects were passé, not like in the movies. Real lives, with real faces that are right in front of you. Not Facebook. Decisions were made, for the good of the family, albeit regretfully. Some would sell to the Jerry Springer show. Dr. Phil would exhume the evidence from the grave.

“For all the saints, who from their labors rest…”

All those old souls are gone now, although some folks still set a place for them at the table.