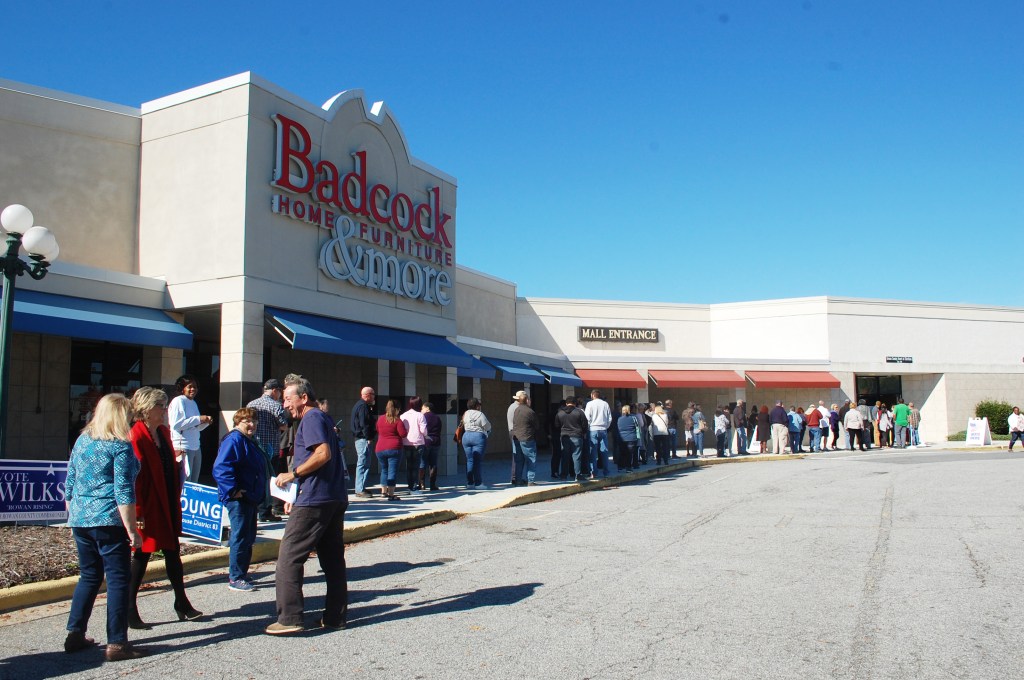 Voluteers hand out an election guide to a voter at early voting on Saturday at West End Plaza. Nancy Evans, the elections director, said 22,633 people voted during one-stop.

SALISBURY — Election Day is just two days away, and on Saturday, early voting finished up with 23,589 ballots casted — 22,633 through one-stop and 956 absentee.

Nancy Evans, the Rowan County elections director, said about 25 percent of people who are registered to vote in Rowan County had voted and expects 45 to 50 percent of the county to vote by Election Day.

She said Friday and Saturday were the busiest days for early voting.

Vera Avery, a Democrat volunteer, was handing out voter guides during the last day of early voting at West End Plaza. She has volunteered at early voting site for multiple years but this year she says it feels more energized.

“I do feel like this is a milestone,” Avery said.

She said most people knew who they were going to vote for, but the most common question was what district they were in for the congressional race.

Patti Silverman, a republican volunteer, said voters have been cordial. She added most have made up their minds but want an election guide.

The volunteers said there was a line starting before early voting started and it died down, but was consistently long after 9 a.m.

The polls remained open for people standing in line as the 1 p.m. closing time approached. She said voters who are in line when the polls close can still vote.

Here’s a list of the races, candidates and amendments voters will find on the ballot in Rowan County for the Nov. 6 election. To see a sample ballot, go to https://vt.ncsbe.gov/RegLkup/ and fill out the online form.

Rowan County Board of Commissioners

Rowan-Salisbury Board of Education, Seat 1

Rowan-Salisbury Board of Education, Seat 2

Rowan-Salisbury Board of Education, Seat 4

Rowan-Salisbury Board of Education, Seat 6

Vote for or against

• Constitutional amendment protecting the right of the people to hunt, fish and harvest wildlife.

• Constitutional amendment to strengthen protections for victims of crime; to establish certain absolute basic rights for victims; and to ensure the enforcement of these rights.

• Constitutional amendment to reduce the income tax rate in North Carolina to a maximum allowable rate of seven percent.

• Constitutional amendment to require voters to provide photo identification before voting in person.

• Constitutional amendment to change the process for filling judicial vacancies that occur between judicial elections from a process in which the governor has sole appointment power to a process in which the people of the state nominate individuals to fill vacancies by way of a commission comprised of appointees made by the judicial, executive and legislative branches charged with making recommendations to the legislature as to which nominees are deemed qualified; then the legislature will recommend at least two nominees to the Governor via legislative action not subject to gubernatorial veto; and the governor will appoint judges from among these nominees.

• Constitutional amendment to establish an eight-member Bipartisan Board of Ethics and Elections Enforcement in the Constitution to administer ethics and elections law.

To find out which district you live in and see your sample ballot, go to https://vt.ncsbe.gov/RegLkup/.