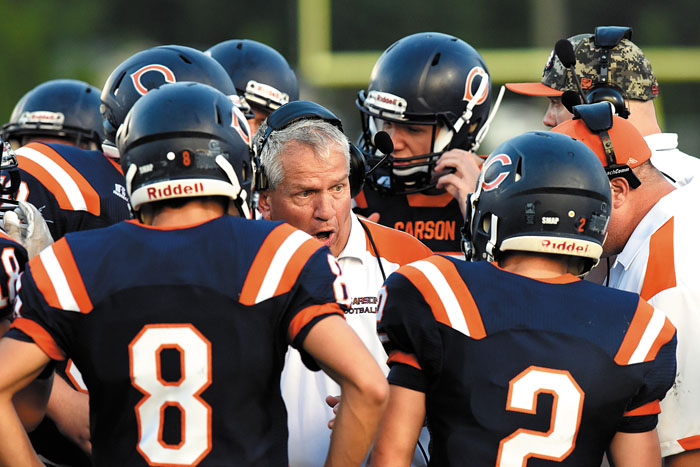 SALISBURY — It was Aug. 15, 2003, opening night of the football season, Granite Quarry.

Edward Douglas “Joe” Pinyan was making his head-coaching debut at age 44. He was at the helm of Salisbury High, the school that had given him a chance. The opposition was East Rowan, the school that had turned him down. Pinyan lived close enough to East to see the stadium lights from his driveway.

Pinyan wanted this one badly, but it was the middle of the second quarter, and his triple-option stuff  was going nowhere against Rick Mazza’s Mustangs. It was still 0-0, and Salisbury’s standout back, Tyris Davidson, was eating dirt. In the bleachers, Pinyan’s mentors, Mike Carter and Pete Stout, were silently screaming at him, “Make the adjustment, Joe. Take what they’re giving you.”

Pinyan made the adjustment.

“We ran a trap play, with Ed Kerr our fullback,” Pinyan said. “All of a sudden, Ed is breaking through, and he’s gone on a long touchdown run.”

That trap call changed the game. Salisbury scored three touchdowns in three minutes. Pinyan looked up in the stands.

“Mike Carter had tears in his eyes,” Pinyan said. “That’s not something I’ll ever forget.”

“I guess the darkest moment at Salisbury was the four forfeits in 2008 after we went undefeated in the regular season,” Pinyan said. “We had to go to Pisgah first round, they beat us in a heck of a game, and they had a great sign waiting for us: ‘Arrive 11-0, leave 7-5.’ But the next year we went back up there and clobbered them. It was a good feeling watching their stadium emptying out early.”

After leaving Salisbury, Pinyan’s teams would win 28 times at Carson in six seasons. Last week he announced he was taking a leave of absence for “personal reasons.”

His current leave of absence will take him into retirement with 34.5 years in the state school system.

“It’s a big loss for Rowan football and North Carolina football,” West Rowan coach Joe Nixon said. “We had our battles, but they always were fun battles. He’s a great coach. He always put in a wrinkle for you to deal with, and whenever you stopped one thing he was running, he had a counter ready.”

Pinyan’s humble beginnings gave little indication that he’d become a famed coach.  He was an average football player at South Rowan, but he loved the game. Serving as a manager at Appalachian State in the late 1970s for head coach Jim Brakefield kept him close to it.

“I’ll always be grateful that he treated me more like a graduate assistant than a manager,” Pinyan said. “I was able to learn a lot of football, and I started thinking maybe I could coach.  I continued to learn after Sparky Woods became head coach. Then Mack Brown came to Appalachian (in 1983), and made me one of his graduate assistants. You could have a lot of them then, and that was an amazing staff. A lot of those grad assistants went on to become Division I coaches. And then there was me.”

His first coaching/teaching gig was at East Rowan. He was the wrestling coach and an assistant football coach during lean times for East football in the 1980s. One of the football players he helped coach was an offensive lineman named Scott Young. Twenty years later, Pinyan and Young would stage memorable Salisbury vs. West Rowan struggles.

“When I was at East, I was involved with four sports programs, because I also was helping Chet Greeson with the East baseball team and helping Chet in the summer with the Kannapolis Legion team,” Pinyan said. “It was sports 24/7. I spent my first wedding anniversary at (Lexington’s) Holt-Moffitt Field.”

His next stop was Mooresville Middle School. He was happy coaching middle school ball, but then Carter, who was having great success at Mooresville High, wanted him to join the high school staff as receivers coach. That would lead to a long association with Carter and Mooresville defensive coordinator Pete Stout,  as coaching colleagues and as friends. Pinyan still talks to them almost daily.

“Mike only ran a handful of plays, but he could dress those plays up better than anyone,” Pinyan said. “I started coming up with a few plays, and I’d say, “Hey, could we run this?’ And Mike would run it.”

Pinyan was content throughout the 1990s. Mooresville was a great place to be. Pinyan had built the wrestling program to a high level, and he was a valued football assistant. He was even coaching golf.

“Imagine getting paid to go play golf,” Pinyan said, with a laugh.

When Carter stepped down in 2002 after 14 fine seasons and 134 victories, Pinyan and his good friend, Barclay Marsh, were perceived as the most likely successors. Mooresville chose Marsh, but Carter and Stout had convinced Pinyan that he was more than ready to run his own program.

Pinyan applied for the East Rowan job in 2003, but didn’t get it. When the Salisbury job opened up, principal Windsor Eagle hired Pinyan. Salisbury hadn’t had a winning season since 1995.

“I hit it off with Windsor, and he made it all work,” Pinyan said. “He’s an unbelievable man. It’s extremely hard to make academics and athletics marry and stick together, but he made it happen.”

Salisbury went 7-5 in 2003. By 2004, the Hornets were 12-2. Stout, who had guided the program during incredible seasons in the late 1960s and early 1970s, watched every practice from his truck, and was there with advice for Pinyan.

By the 2004-05 school year, Eagle had expanded Pinyan’s duties to athletic director. It was a golden time for the Hornets. They were state-championship contenders in a lot of sports.

Pinyan remembers a pivotal night in 2005. Heavily favored Salisbury had been stunned in the first round of the state playoffs by Mount Pleasant. The Tigers had a poor seed because they’d play most of the season without their quarterback, but he was special and he’d come back from injury in time to knock out the Hornets.

“I remember telling Windsor Eagle that I’d let everybody down, that they’d hired me to win championships, and I’d lost in the first round,” Pinyan said. “He said to keep doing what I was doing and we’d win those championships. And what a ride it was.”

The Hornets knocked on the door in 2009. QB John Knox was ruled down at the 1-inch line at Newton-Conover in overtime to end a state semifinal. Pinyan is still sure Knox got in the end zone.

In 2010, the Hornets overcame a 3-3 start, overcame a stunning loss at Carson, and won the 2AA state championship.

They reached the third round in 2011.

In 2012, the Hornets came close again. South Iredell staged an incredible rally at Ludwig Stadium and beat the Hornets, 35-28, in a state semifinal. That would be Pinyan’s final game at Salisbury.

“We had so many great players and so many great assistant coaches, guys like JK Adkins, who might win the state championship at Mt. Airy this year,” Pinyan said. “I’ve got great memories from those years. Every game we played against Thomasville was an instant classic. We beat Shelby at our place and at their place, and how many 2A programs can say that? I got a chance to coach in the Shrine Bowl and to be head coach in the East-West Game.”

Carson was Pinyan’s next stop after SHS. There were some emotional returns to Ludwig Stadium as a visitor.

Pinyan’s team was 3-8 last season. The Cougars wrapped up another 3-8 campaign on Friday.

“We had some great athletes at Carson,” Pinyan said. “We had Owen White, MyQuon Stout, Tre Williams, but we just didn’t have enough. We still beat Hickory Ridge when they were very good, and we beat West Rowan one night, although I’m still not sure how we did it.”

When he announced his leave of absence, Pinyan received a wave of text messages from former players.

“Cole Sifford thanked me for believing in him and letting him play,” Pinyan said. “Cole was maybe 140 pounds and played quarterback and fullback for us. I thanked him for playing.”

Pinyan coaxed  the same sort of effort from the Cougars that he got from the Hornets. His teams at both places played smart football. They made halftime adjustments.  They left it on the field.

He took great pride in his jayvee programs. His Salisbury jayvee teams went 80-20 overall, 54-7 in the Central Carolina Conference, and 29-13 in the county. His Carson jayvees went 21-4 in county games.

“I was blessed with great staffs at both schools, but I know I was never the easiest guy to work for,” Pinyan said. “I’m just really passionate about football, and for 15 weeks a year, I put seven days a week into it. That’s just what you do as a football coach.”

He’ll have more time now. He’ll play more golf. He’ll continue to umpire baseball and officiate wrestling. He had a chance to travel to watch Appalachian State play at Coastal Carolina on Saturday. And he had a chance to see his daughter and new son-in-law, a guy (Riley Gallagher) who played for him at Salisbury.

He hasn’t ruled out a return to football coaching at some point. His energy level is still high.

He won’t be forgotten any time soon.

“He worked tirelessly,” said Carson assistant Josh Trexler who guided the Cougars in their last two games. “I’m 28, and he outworked me. He just outworked everyone and he never put himself above any assistant or any player. No coach has ever cared more about the kids.  I think that’s his legacy.”

Pinyan, a three-time coach of the year in the county, really did care, tried to be a father figure for kids who didn’t have one, tried to bring discipline and accountability to everyone, from the stars, to the last man on the roster. If you were on his team, he coached you up.

“There was always more to football than just the games,” Pinyan said. “Hopefully, a lot of kids I coached took lessons from it, things they can apply to life.”