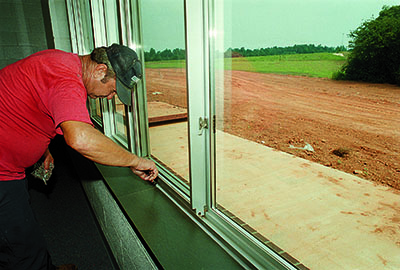 A worker from a waterproofing company applies a bead of caulk around the base of a classroom at Henderson School in 1999. Post file photo

Second in a four-part series

All across our country, an unrecognized force — low quality indoor air in schools, is hurting student success.

According to one a massive survey conducted by the EPA, one-half of our nation’s 115,000 K-12 schools have indoor air quality (IAQ) problems.

School buildings are constructed to meet detailed technical building codes in place at the time of construction (including the amount of fresh air required). Once built, if the fresh air requirement changes, there is no legal obligation to go back and bring an existing building up to the new standard.

Brain scientists have proven that certain levels of fresh air improve student performance. Tests conducted in many schools around the country routinely find half the recommended amount of fresh air in the classroom.

Said another way, we have a wonderful opportunity to improve student performance by upgrading the schools’ existing air conditioning systems to bring in fresh air.

Nationally, members of school boards and school administrators often do not know about this opportunity to improve student success.

A large number of North Carolina schools were built during the 1930’s Great Depression under a massive federally funded jobs creation law called The Public Works Administration. Under federal guidelines, these schools were built as symbols of national strength, and built to last. A surprising number of them are still in use now — 90 years later.

As you can imagine, they have little ability to bring in fresh air.

After the Second World War, returning veterans and their brides created the need for a lot of new schools. This second school building boom occurred about 70 years ago, using what is now obsolete and worn out air conditioning technology. Again, a surprising number of these buildings are still in use.

The next generation of schools was built when the veterans became grandparents. This was right around the Arab oil embargo and energy crisis. New school buildings were designed to save energy by limiting outside fresh air.

At the same time, because of rising energy costs, older existing school systems began to seal windows shut to save money. What little fresh air the buildings used to get fell victim to caulk.

Schools built in the last 20 years usually have more modern and robust heating and cooling systems installed —  and usually no ability to open the windows. Most newer schools have the option to allow fresh air to be brought in by building wide fan systems — but many districts do not fully use this technology because when fresh air is brought in you have to pay to either cool it or heat it.

In these newer buildings, maintenance staff is often praised for holding the line on energy costs — while at the same time teachers and parents were criticized for poor student test grades.

Dozens and dozens of research papers show very clearly that once the problem of the lack of fresh air in the classroom is identified and equipment is either tuned up or updated, student success soars.

In Texas, one researcher tracked student performance before and after a string of schools had their air conditioning updated. “After fixing our indoor air quality, we have seen an increase in scores of 17.3 percent on standardized tests” said one leader.

Similar findings are reported all around the world. For example, in Denmark, scientists found that stuffy, hot classrooms lowered student performance by 30 percent.

We can fix this.

Next week: How student and staff health improve after more fresh air is present.

Kannapolis resident Francis Koster, is a retired pediatric healthcare administrator with a passion for helping children maximize their potential. He has created a not-for-profit organization that lends students and other citizens meters that “make the invisible visible” in our air and water.