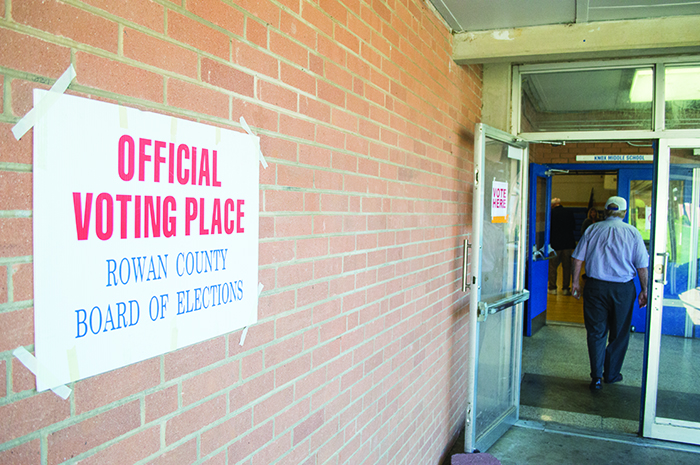 SALISBURY — One of the most controversial proposed amendments to the North Carolina constitution being considered by voters this fall also has the shortest ballot question:

“Constitutional amendment to require voters to provide photo identification before voting in person.”

Depending on who’s talking, those 13 words are a common-sense step to protect the integrity of the vote — or an attack on hard-won voting rights.

The General Assembly voted in June to put the amendment before voters after a federal appeals court found parts of the state’s 2013 voting law unconstitutional. The U.S. Supreme Court declined to take up the issue on appeal.

The people who see a voter ID requirement as an attack include many African-Americans who say the amendment is yet another obstacle intended to discourage minority voting.

Gemale Black, president of the Salisbury-Rowan Branch of the NAACP, says voters he knows are highly motivated to vote against the amendment “because they feel this is a violation of every citizen’s right to be able to vote.”

He sees the amendment as a political ploy that’s already having an impact.

“I also believe that the amendment partially did what it was created and intended to do, which is to discourage voters to stay away from the polls in an attempt to hassle voters,” Black says.

North Carolina voters do not have to present a photo ID to vote in this fall’s elections. Such a requirement was in place for the May 2016 primary, but the federal court ruling prevented that.

Pro: ‘Not a radical idea’

Elaine Hewitt, vice chairwoman of the Rowan County Republican Party and a former elections board member, supports the amendment as a way to protect the integrity of the election system.

Thirty-four states have laws requesting or requiring voters to show some form of identification at the polls, according to the National Conference of State Legislatures. In 17 of those states, a photo ID is required; the other 17 also accept non-photo IDs.

“It is not a radical idea,” Hewitt says. “The Rowan Public Library and the Salisbury YMCA have my photo on record. Whether the voter shows an ID or the photo is in a database, the technology is not difficult.”

The issue has come up in recent years, she says, because Democrats liberalized voting laws and were not as concerned about election integrity. When Republicans gained power and tried to tighten laws, they ran into opposition — hence, the amendment approach.

“I support a statute; however, the Democrat approach is to litigate each issue until they can get the issue to a liberal court. The N.C. Voter ID statute, HB 589, is a perfect example,” Hewitt says.

After the bill was passed in the legislature, the N.C. NAACP and others sued to stop it.

A Superior Court issued a 485-page decision approving the law, and the plaintiffs filed an appeal. A federal panel found the law unconstitutional and said it was an effort to “target African-Americans with almost surgical precision.”

Republicans decided to put the issue to the voters.

Emily Perry, an African-American community activist in Salisbury, says it’s a shame and a disgrace that the issue is on the ballot after going through the courts.

“It’s just not respectful,” Perry says. “It’s disenfranchising many, many of our people.”

Perry compares the photo ID rule to past efforts to disenfranchise black voters with requirements such as guessing how many jelly beans were in a jar.

Perry heads the task force that is establishing the Dixonville-Lincoln Memorial, a project to honor a pre-Civil War African-American cemetery in Salisbury.

And the amendment does not say what kind of ID would be accepted, she says; the legislature plans to fill in those details after the vote.