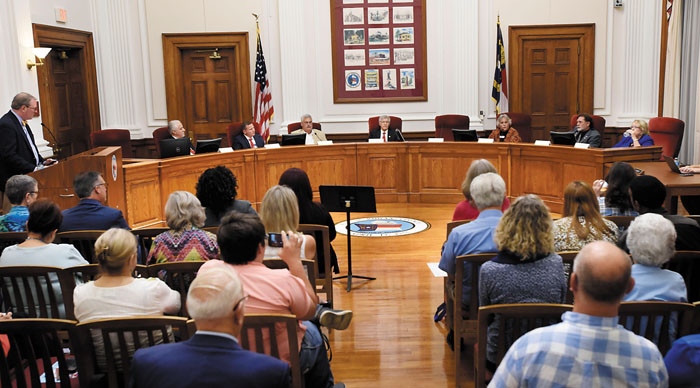 Warren, who currently represents the other side of the county, said the most important issues facing his new district are economic development, quality of life and health care.

Fowler, a former wildlife enforcement officer and food business owner, said education and environment are important issues throughout the district, especially Rowan-Salisbury Schools’ status as a renewal school system and the coal ash site in Dukeville.

Warren said the need to ensure continued funding for infrastructure and working with the Rowan County Economic Development Commission and counties commissioners are also important issues. He said the state has an improving economy, but Hurricane Florence could change this.

“We’re doing great for the economy, but the coast was hit hard in the agriculture and agribusiness sector,” Warren said.

“If you could change something tomorrow, most say minimum wage,” Fowler said.

Fowler cited agriculture as an important part for the state’s economy.

Warren cited 30 years of business management experience and his children for preparing him to continue being as a legislator.

“I have six kids who have provided me with skills and interpersonal relationships to help with balance and being able to listen to people on the other side,” Warren said.

The lack of teamwork in the General Assembly is the reason Fowler said he decided to run. He said he saw upheaval in Raleigh and things that he says are unfair.

“I remember them agreeing on things that were best for the state,” he said.

Both Warren and Fowler said education is something the state needs to improve.

Fowler said he attended the teachers march in May and agrees teachers need higher pay, but he also said they need to feel secure in their jobs by having extended contracts, not yearly.

“Every meeting I go to, education is always first,” Fowler said.

Environment is also a key issue for Fowler, especially figuring out what to do with discarded coal ash from energy plants and preventing it from harming people and the environment.

“The only place that’s going to stop it is in the General Assembly,” Fowler said.

Warren said he wants to continue to work to provide lead testing of school water and introduce legislation on single-use plastics, a promise made to his daughter.

Republican Carl Ford currently represents much of the area in the new 76th District. He is running for state Senate.