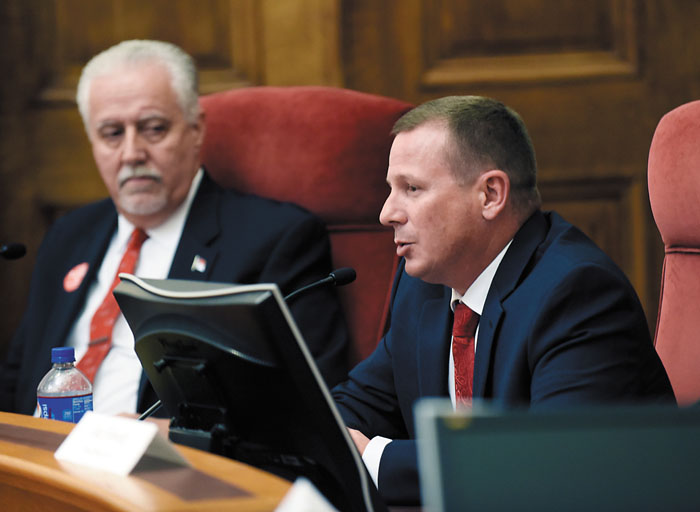 True, Wilhelm faces an experienced legislator by taking on Republican Carl Ford for the redrawn N.C. Senate District 33 seat, which encompasses all of Rowan and Stanly counties.

And true, recent elections have shown those counties to be weighted toward the GOP.

But Wilhelm thinks there are plenty of people in the two counties who don’t automatically cast their votes based on party.

“A lot of moderate Republicans and independents are open-minded,” says Wilhelm, a former Granite Quarry alderman. “They can weigh and measure someone. They don’t always vote party. It’s people like that I feel I appeal to.”

Because of the way it was redrawn, this Senate District 33 seat has no incumbent. Ford, who has served three terms in the N.C. House, is running for the Senate for the first time, as is Wilhelm.

Ford defeated Bill Sorenson of Stanly County in the May Republican primary by capturing more than 60 percent of the vote. With the key GOP win behind him, he’s not being complacent heading toward the Nov. 6 general election.

“I never take anything for granted,” Ford says.

Even when he has not faced an opponent in the past three elections, Ford says he “never let up” in campaigning and meeting with voters. Likewise, this year, he has been “burning a lot of fuel and a lot of tires.”

People in Rowan County are familiar with Ford through his years in the N.C. House; his four years as a Rowan County commissioner, including two as chairman; two years on the county Planning Board; and more than seven years on the Department of Social Services board.

So Ford has been working Stanly County especially hard, going to local government meetings, attending school board sessions and showing up at the Stanly County Fair and other events.

“It’s still new,” Ford says, “and I’m still learning it, but rarely a week goes by that I’m not in Stanly County for something.”

Sometimes going with a door-to-door approach he took when running for the town board in Granite Quarry, Wilhelm also has been attending a lot of events and meetings in both counties.

Wilhelm sees himself as being more concerned about public education, the environment, healthcare access and dealing with opioid abuse in North Carolina.

“That’s the way I’ve always been, getting government out of the way so people can succeed,” Ford says. “… Things seem to be going well, and I want to make sure that continues.”

Wilhelm is against the six state constitutional amendments that are on the Nov. 6 ballot. Those amendments originated with the Republican-controlled legislature.

Ford is for all six.

“If I hadn’t been, I wouldn’t have voted to put them on the ballot,” he says.

Ford and his wife own AM radio stations WRNA in China Grove and WRKB in Kannapolis.

Ford often can be heard on the air each morning and sometimes in the afternoons. The stations usually are simulcasting, except for Friday night football games and Sunday morning church services.

Ford says he would give the Republican-controlled legislature an A-minus grade for the work it has done over the past eight years, especially after 140 years during which the GOP never had a total majority in the Senate and House.

With Republican leadership, the General Assembly has paid off the state’s debt and put billions of dollars into a Rainy Day Fund that can now be used to help victims of recent hurricanes, Ford says.

Republican tax cuts have allowed North Carolinians to keep more of their money, he adds.

“I’ve always believed in constituent service,” Ford says, adding the public never hears about all the things legislators help people with, no matter their party affiliations. He says he meets “tons of people” at his office in Raleigh or back in the district .

When thousands of teachers marched and protested earlier this year in Raleigh, Ford says he met with all the teachers from Rowan County that day. “We had a very good, productive meeting,” he says.

Ford says the Republican-led General Assembly has added $2 billion to the education budget in the past five years while also giving teachers pay raises over that same span, plus more holidays.

“There’s definitely more to do,” he says. “I think it’s been fairly productive.”

A staunch conservative, Ford thinks there could be more tweaking on gun legislation. He’s adamantly opposed to toll roads. If the state’s going to have toll roads, “then don’t tax my vehicles and don’t tax my gasoline,” Ford says.

On the state lottery, he says he has joined other legislators in trying to stop “some of the really silly advertising.”

Ford says he knows it would be futile trying to introduce a bill that would kill the lottery because it would never get out of committee.

“I still believe it’s oppression of the poor,” he adds. “Some people are buying them (lottery tickets) who can’t afford them, and that’s sad.”

He would like to see more lottery money go to public schools and less to the university system.

Ford, 61, is an Eagle Scout, a lifetime member of the National Rifle Association and member of City Revival Church in Kannapolis.

Wilhelm contends that the legislature has taken money away from public education, and the legislature should be listening to teachers and school administrators. “I don’t think they’ve done that, obviously,” Wilhelm says. “Teachers have the most important jobs in the country. We don’t necessarily treat them that way.”

Wilhelm supports teacher pay increases. He says he doesn’t believe in a one-size-fits-all approach to education and that more must be done in creating vocational opportunities for the students who don’t want to attend college.

While not a fan of standardized testing, Wilhelm does favor tests aimed at revealing what kids are interested in and what their talents might be.

Wilhelm favors the legalization of marijuana for medicinal use. As for its recreational use, that question should be put to a referendum, Wilhelm says.

Toll roads should only be allowed as a last resort, Wilhelm says. He thinks they penalize poor people.

On the problems associated with opioid abuse, Wilhelm says Stanly County ranks first in the state in the number of overdoses per capita.

“It’s real,” he says of the overall epidemic. “It’s going to take time to fix it.”

A Navy veteran, Wilhelm has a bachelor’s degree in psychology from California Coast University and a master’s degree in theology from Hood Theological Seminary. He belongs to Healthy Rowan and was a member of the transportation advisory committee for Cabarrus and Rowan counties.

His work has taken him regularly into Stanly County for the past six years. He also worked eight years previously with at-risk youth at Nazareth.