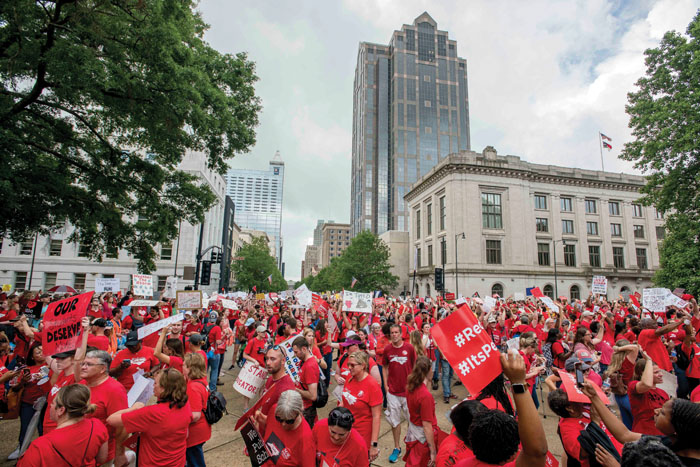 Teachers arrive at the State Capitol grounds after marching up Fayetteville Street in May. Jon C. Lakey/Salisbury Post

SALISBURY — Not many legislative candidates this year are wider apart on the political spectrum than N.C. Rep. Julia Howard, R-Davie, and her challenger, Democrat Bonnie Clark.

Howard, owner of Howard Realty for 40-plus years, has served 15 terms in the state House and has been in the local political arena since serving on the Mocksville Town Council from 1981 to 1988.

Over her 30 years as a legislator, and depending on how the boundaries of her House district were drawn, Howard has served constituents in Davie, Davidson, Iredell and Forsyth counties. With this election, she’s trying to add Rowan.

Clark is making her first run for political office. She is a hemp farmer, Navy veteran and former mental health therapist and community college educator.

Howard and Clark are facing each other in the newly redrawn 77th House District, which includes all of Davie County (where both candidates live) and portions of western Rowan.

So how much do these candidates differ?

Howard supports the six constitutional amendments on the Nov. 6 ballot. Clark is opposed to all six.

“We have such a drug-addicted state now,” Howard says, “and if you do research, a lot of times the door opens with what people will say is harmless marijuana and it leads to other things.”

Clark is for term limits — two terms — on every political office in the land. As a candidate for the first time, Clark says the process has been eye-opening and the pressure put on candidates to raise money “is a serious problem.”

She ties in her support of term limits with major campaign reform. Clark says candidates are spending “insane amounts of money” for a $14,000-a-year job. Why do they do that, she asks, unless it’s giving them access to other money for their own personal gain.

Howard says the ballot box has always been the electorate’s built-in assurance of term limits. In a legislator’s case, Howard notes, voters have a chance every two years to cast the incumbent out.

Howard thinks the Republican-controlled legislature has done a good job with retiring the state debt, tax reform and support of public education.

Clark thinks what Republican legislators are doing to public education is atrocious.

Howard was a primary sponsor of House Bill 2, the much-discussed “Bathroom Bill” that struck down the city of Charlotte’s ordinance to provide protections for transgender people.

House Bill 2 prevented transgender people from using government-run restrooms corresponding to the gender with which they identify.

It also nullified local ordinances around the state aimed at expanding protections for the LBGT community.

Clark says Senate President Pro Tem Phil Berger and Howard teamed up to ban transgender people from using restrooms that did not match their birth certificates. Clark said all facets of the bill were “so unconstitutional, it’s mind-blowing.”

Howard, 74, says her 30 years of legislative experience has helped her learn how to get things done in Raleigh.

“There’s more than one way to do things,” Howard says. “I guess the biggest thing is learning to have patience, and if you don’t get it fixed or accomplished this year, there’s another time.”

Howard says she used to think “compromise” was an ugly word, “but it isn’t.”

Compromise, she says, is sometimes needed to get things moving in the right direction, considering the House is filled with 120 individual opinions and the Senate, 50 more.

Howard said she is more patient and compassionate than she might have been as a rookie legislator, and she realizes today there are more gray areas — “circumstances out there that you can’t explain in three minutes.”

“I think we’ve done a really good job and, of course, you would expect me to say this, with tax reform,” Howard says.

On public education, she says the GOP-led General Assembly has increased teacher pay for five years; the average teacher salary is over $50,000 a year.

Howard acknowledges being taken aback by the teachers’ march on Raleigh earlier this year. She thinks legislators have done all they can to increase pay, decrease class size and improve technology in each school.

“It’s certainly their right to do that,” Howard says. “I’ve always supported the public schools, not necessarily the NCAE, but the teachers individually.”

Howard says her entire philosophy as a person, business owner, legislator, parent and grandparent tends to be conservative. She chairs the House Banking Committee and says honesty and integrity are important to her.

Knowing she is campaigning in a Republican-leaning district, Clark says she has met Republicans who say they’ll be voting for her because they know her and recognize she cares for people and has the necessary leadership skills and integrity.

“And they don’t like the way things are going in North Carolina,” Clark adds.

Clark contends the state is not paying many of its public school teachers a living wage. When Republicans say the average salary is $51,000 a year, she says, they are beefing up that number dramatically by adding in the salaries of superintendents, principals and other administrators.

“Too many of our teachers have to get a second job to pay their bills,” Clark says.

By having teachers pay more for their health insurance and denying participation in future pension plans, the profession is being marginalized, Clark says, hurting millions of people.

Farmers such as Clark harvest hemp legally to create CBD (cannabinoid) oil, which is used medicinally and does not have the THC compound present in marijuana.

The yield for CBD is much higher than for tobacco and cotton, Clark says, and as a cash crop, it could restore family farms and the agricultural economy.