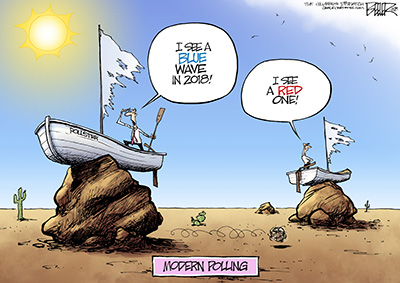 Remember the Watergate class of 1974? I do, and the 2018 class of House Democratic challengers is even more impressive.

In the midterm election on Tuesday, Democrats are likely to pick up 33 or 34 seats in the House of Representatives that are now occupied by Republicans. That’s comfortably over the 23 they need to take control, so quality matters. And the caliber of this fresh crop of Democratic candidates is substantively and politically high. Most are in their 30s and 40s, and they comprise an eclectic group of military veterans, entrepreneurs, leaders of nonprofit organizations and state or local officials. Some were recruited to run. Others rolled over the establishment to win.

Collectively they’re progressive, but few are ideologues. They’re resisters when it comes to President Donald Trump, but many say they’d like to find common ground with Republicans. They see themselves as part of a new political generation, but they don’t expect to change the world overnight.

Close to half the new Democratic members will be women and quite a few will be members of minority groups. By contrast, fewer than 10 percent of the 1974 class was female and there was only one minority-group representative, Harold Ford of Tennessee.

A recent book on that historic group, “The Class of ’74: Congress After Watergate and the Roots of Partisanship,” by John Lawrence, a former congressional aide, includes stories about accidental winners. Marty Russo of Illinois, for example, thought he’d run, lose and then maybe get a local judgeship. I haven’t met any challenger this year who’s looking for a judgeship.

The 1974 winners were labeled “Watergate babies” because they followed in the wake of a backlash to the scandals surrounding President Richard Nixon. But Lawrence notes that the 1972 break-in by GOP operatives at the Democratic National Committee headquarters in the Watergate complex in Washington, and even Nixon’s resignation two years later, actually figured only modestly in most of their candidacies. The biggest campaign issue was the Vietnam War, which most of them opposed. Trump is the current group’s Vietnam.

Some members of that 1974 class left distinguished marks on American politics. These included accomplished legislators like the Californians Henry Waxman and George Miller. Tom Harkin of Iowa and Christopher Dodd of Connecticut went on to become five-term senators. Abner Mikva of Illinois became a U.S. Court of Appeals judge, White House counsel under President Bill Clinton and a mentor to a young Illinois politician named Barack Obama.

It’s easy to imagine members of this year’s class doing similarly impactful things if they win on Tuesday.

For example, several Democratic women with national security backgrounds have a lot of potential. They include military veterans such as Amy McGrath of Kentucky, who served as a Marine combat pilot; New Jersey’s Mikie Sherrill, a former Navy helicopter aviator; Elaine Luria of Virginia, who was a Navy ship commander, and Pennsylvania’s Chrissy Houlahan, an ex-Air Force officer.

Elissa Slotkin was a Defense Department official in the Obama administration; she’s running in Michigan. Virginia’s Abigail Spanberger was an officer of the Central Intelligence Agency. Nancy Soderberg of Florida was a member of the National Security Council and a United Nations official in the Clinton administration.

They all bring expertise to defense and foreign policy questions; it’ll be hard for Trump and other Republicans to tar them with boilerplate accusations that Democrats are softies. And their experiences rising through the service ranks gives them a deeper understanding than most male colleagues of the #MeToo movement.

African-American candidates running in predominately white districts also bring a lot to the table. These include Colin Allred in Dallas, Anthony Delgado in upstate New York, Lucy McBath near Atlanta, Lauren Underwood in exurban Chicago and Steven Horsford in Nevada. They’re all strong civil rights advocates. But they’d bring a flexible outlook and their own perspective to the Congressional Black Caucus, where most incumbents hail from districts that are overwhelmingly African-American.

Another standout is Ben McAdams, who’s been mayor of Salt Lake County, Utah, for six years. The House needs members who have dealt with local problems. (From a diversity perspective it’s too bad that he’s running against the only black House Republican, Mia Love.)

A couple of underdogs also deserve a special mention. One is Aftab Pureval, an Indian-American running in Cincinnati. A former member of the legal staff at Proctor & Gamble Co. who’s now Clerk of the Courts in Hamilton County, he’d be a big upgrade over the lackluster incumbent, Steve Chabot.

A Pureval win would also be a victory over Trump-style divisiveness; he’s been targeted by sleazy advertising bankrolled by House Speaker Paul Ryan’s super-PAC, the Congressional Leadership Fund. A misleading attack ad links Pureval to Libyan terrorists and that country’s late dictator, Muammar al-Qaddafi. In truth, Pureval joined White & Case, a huge global law firm, right out of the University of Cincinnati law school in 2008. A month before he joined, that firm had represented Libya in settling a $1.5 billion payout to victims of terrorists that had been approved by Congress and President George W. Bush. Pureval had nothing to do with it.

Another interesting dark horse is Richard Ojeda of West Virginia, who campaigns in combat boots and a T-shirt. Maybe he’d change the House dress code. More to the point, his working-class roots would make him a counterweight to the strains of elitism that sometimes run through the Democratic caucus.

Somewhere in the group there’s a future Mikva or Waxman. Let’s hope nobody follows in the footsteps of others who tarnished the luster of that 1974 class. Republicans George Hansen and Richard Kelly and Democrats Carroll Hubbard, John Jenrette and Fred Richmond all ended up in prison.

Hunt is a Bloomberg Opinion columnist covering politics and policy. He was the executive editor of Bloomberg News, before which he was a reporter, bureau chief and executive Washington editor at the Wall Street Journal.

Letter: Listen with your heart