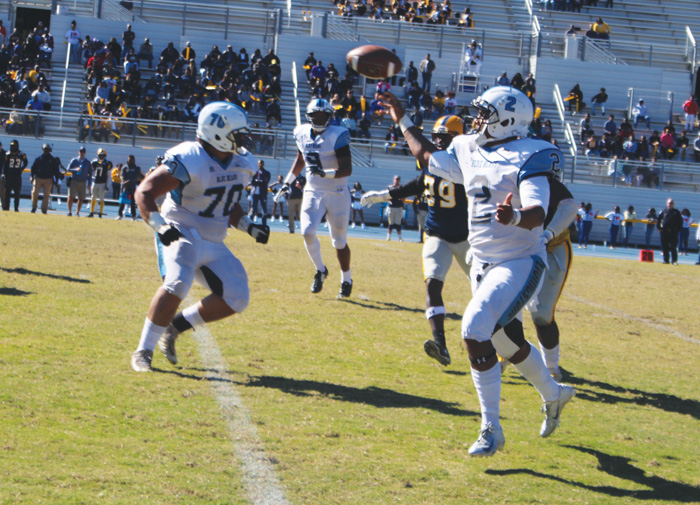 Oralia Washington/Livingstone Sports Info Livingstone quarterback Miles Hayes passes the football during Saturday's college football game against Johnson C. Smith in Charlotte. Hayes was the game's MVP as Livingstone won, 20-9. The win was the Blue Bears' first in the Commemorative Cup series with JCSU since 2015. Nov. 3, 2018.

The Blue Bears defeated Johnson C. Smith, 20-9, at Irwin Belk Complex, winning the Commemorative Cup for the first time since 2015.

The cup acknowledges that Livingstone and J.C. Smith have the oldest rivalry in black college football. The two schools played for the first time in 1892.

The topsy-turvy season started with head coach Daryl Williams sitting out the first four games, due to an administrative decision. The team, under the game-day direction of defensive coordinator Rodney Hughey, started 2-1, but then two different hurricanes canceled a winnable game at Lane on Sept. 15, then caused a CIAA victory over Lincoln to later be deemed as non-conference.

Then came a five-game losing skid, including last week’s 45-7 loss at Fayetteville State.

The offense, coordinated by Williams, saw the return of freshman quarterback Miles Hayes, who had missed two weeks with an ankle injury.

Hayes completed 11-of-19 passes for 214 yards and a touchdown. He was chosen as the game’s MVP.

“Man, it’s good to be on the left side of the win-loss column,” said Williams, finishing his sixth season at the helm. “The coaches did a good job of preparing the kids all week and we had a good week of practice.

“The defense played very well again,” continued Williams. “And we had just one or two mishaps on offense. For the most part, everybody carried out their assignments and did what was asked of them.”

Livingstone hit the Golden Bulls with 10 points in the first quarter and in reality, that was enough to win the game.

Running back Justin Ruffin, of Salisbury, took a pass from Hayes and raced 32 yards for a touchdown, opening the scoring, just two minutes into the contest.

Kicker Antoine Akundu, who transferred into Livingstone this season, booted the extra point, as well as a 37-yard field goal at the 7:26-mark.

The Blue Bears snapped the football out of the end zone later in the first period, giving JCSU two points, but the offense stunned the Golden Bulls just before halftime.

Running back Anthony Faraimo dashed 31 yards for a Livingstone TD with only 23 seconds left in the half, for a commanding, 17-2 lead.

The second half was more of the same, with the exception of a 57-yard touchdown pass from JCSU quarterback Antonio Wallace to receiver Braxton Gambrell.

“The defense did an excellent job of shutting them down and without giving up the one easy score in the third quarter, it would have been a remarkable performance,” said Williams. “Coach Hughey did a great job all year of game planning and Saturday, we had a good plan and a decent pass rush.”

Williams noted that the offense “picked up” the defense after JCSU’s big play. The Blue Bears had a touchdown that was called back by a penalty, but Akundu added a 29-yard field goal to conclude the scoring.

The Blue Bears also had issues running the ball (49 attempts for 36 yards), but behind Hayes’ passing, totaled 250 yards and 16 first downs. The Golden Bulls had 31 carries for one yard and picked up just 106 through the air, Wallace completing just 5-of-25 passes.

“Hayes played well,” Coach Williams said, of his young QB. “He got a great chance to get his feet wet this season and responded well, coming off an ankle injury. Winning the game’s MVP was a good thing, something he can build on going forward. He will only continue to get better with hard work in the off season.”

Marcus Baisy Jr., one of three Livingstone four-year seniors, led the Blue Bears on the ground with 43 yards on 23 carries. Anthony Faraimo led receivers with 93 yards on three catches.

“I’m proud of the way the kids responded after last week, as a team and as a individual units — offense, defense and special teams,” added Coach Williams. “The players were extremely happy with the win. They stayed on the field longer than normal, close to an hour.”

NOTE: In addition to Baisy, defensive players Armond Cox and Gregory Hines finished up four-year careers at Livingstone. Hines had a 37-yard kickoff return on Saturday. … The Bulls won that first game in 1892, 5-0, when the school was known as Biddle College. … JCSU now leads the series, 47-32.