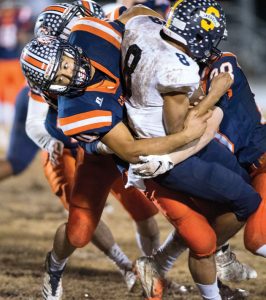 CHINA GROVE — A lot of Friday night’s adventure at Carson was old-fashioned — a muddy, torn-up pasture of a field and the home team running an old-school, triple-option offense that was in vogue in the 1970s.

It was a barrel of nostalgic fun seeing the wishbone formation step out of the pages of history books, but the bottom line was just one more loss for Carson (3-8, 1-4). This will be the last one for 2018.

Free-wheeling on offense and hard-nosed on defense, South Iredell avoided the killer, big-play mistakes that plagued the Cougars. The Vikings won, 35-14.

“Our kids came out and executed the plan, offensively and defensively,” said defensive coordinator Devon Radcliff, who was filling in as head coach for Scott Miller. “It’s extremely hard to prepare for what Carson does in a matter of days. What they do is hard to stop, and they’re good at it. We knew we needed to make this a race, not a monster-truck fight. We couldn’t let Carson just grind it at us, and we did what we needed to do.”

It’s a North Piedmont Conference victory that all but assures South Iredell (5-5, 3-1) of  sharing the league title with next week’s Statesville-East Rowan winner. South Iredell finishes up with North Iredell, which  hasn’t come close to winning a league game.

South Iredell quarterback Holland Dowdy, a poised scrambler who can throw on the run, was the game’s dominant offensive player. He surpassed 100 yards both rushing and passing and accounted for three touchdowns.

“He did a great job of running our offense,” Radcliff. “On a tough field, we didn’t turn it over.”

It’s usually a matter of a handful of plays. There were three game-swingers on Friday.

In the second quarter, the Cougars fumbled the exchange on a pivotal fourth-down play at the South Iredell 1. That was probably the biggest play all night.

Then at the end of the first half, the Cougars were burned for a touchdown pass with 8 seconds on the clock.

“Three plays that changed everything,” said Josh Trexler, Carson’s interim head coach. “It should’ve been 21-14 at halftime, but instead it’s 28-7. All year long we’ve been about as good as anyone from 20 to 20, but we struggled to finish, we didn’t put the ball in the box. This league is very even, one to five, and we honestly felt like we had a chance in every game. We just didn’t get it done.”

Things went badly right away for Carson, which is still in emotional shock from Joe Pinyan’s sudden retirement announcement last week. South Iredell was going to be facing third and very long on its first possession, but Carson was flagged for a late hit out of bounds. The Vikings got a drive going, and Dowdy put in the box with a 4-yard run with 9:46 left in the first quarter.

Less than a minute later, Wilson set sail on his fumble return TD for 14-0.

“After that fumble and with the bad field conditions, I was nervous about calling anything where we’d have to make a read and a pitch,” Trexler said. “We just never could establish anything outside to stretch their defense. We had to try to stick it up the middle, but we still had a lot of successful plays.”

Carson put together a solid drive that culminated with a 3-yard scoring run by Jerry Cipres. That made it 14-7 with 4:14 left in the first quarter. The Cougars were back in the game temporarily.

“It felt good to get a touchdown in my last game, and I really wanted to go out with one,” Cipres said. “But this was a game we wanted to win and knew we had a chance to win. We just didn’t execute. That tears me. That’s heartbreaking.”

Dowdy answered, making a nice fake, keeping the ball and exploding past the Cougars on a 26-yard scoring run for 21-7. That score came  barely a minute after Cipres’ TD.

“We had their QB in a lot of tight spots all night,” Trexler said. “But we couldn’t get him on the ground.”

Down two TDs, Carson got a break when South Iredell had a bad snap in punt formation. The Cougars moved all the way to the 1, but that’s when QB Justin Smith lost the handle on a soggy, fourth-down exchange.

It appeared that the second quarter would be scoreless, but South Iredell got the ball with 55 seconds to go in the half, and Dowdy led them to the end zone to make it 28-7. That was a backbreaker.

“We knew we couldn’t let Carson hang around because we knew they weren’t going to change who they are,” Radcliff said. “That was a big touchdown because Carson didn’t panic. They came out for the second half, still running the ball, still believing that they would win if they executed. We had to buckle up.”

Carson had one more major opportunity in the fourth quarter. After a Smith-to-AJ Jackson 12-yard completion,  the Cougars had first-and-10 at the South Iredell 29 and appeared on the verge of making it a one-score game. But two negative plays pushed the ball back. On fourth-and-21, Smith was sacked by Wilson with 9:10 remaining.

“It was a tough night on a sloppy field,” Carson defensive lineman Teolyn Woodruff said. “We got some tough breaks and we made mistakes that cost us.”

South Iredell tacked on an insurance TD with 4:46 remaining, leaving the Cougars with thoughts of what might have been.

“My last game was the muddiest ballgame I’ve ever played in,” Carson spur Jason Taylor said, shaking his head.  “We were slipping and sliding all over the place.”

Carson won time of possession, as it almost always does, but South Iredell made the plays that changed the scoreboard.

“That fumble on the 1, that letdown at the end of the first half,” Trexler said. “We’ve seen it all before. That was the story of our season.”