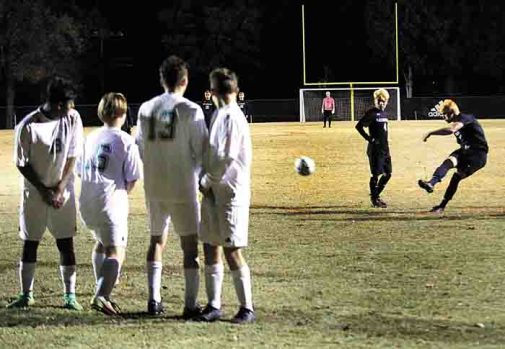 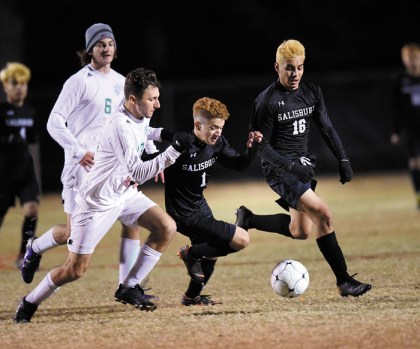 Salisbury'sDennis Anays 1 and Christopher Portillo 16 with WD's Caleb Harper 13 and Hugh Bennett 6. photo by Wayne Hinshaw, for the Salisbury Post 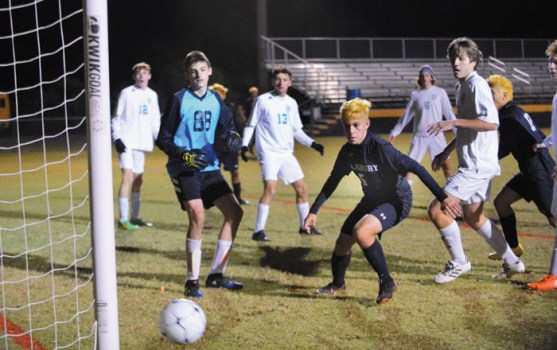 Salisbury's keeper Josh Faulkner makes a save. photo by Wayne Hinshaw, for the Salisbury Post

The senior striker scored two overtime goals Saturday night at Ludwig Stadium, where the Hornets opened the 2A state playoffs with a 4-2 victory over longtime rival West Davidson.

“That’s the Tony we’ve been waiting for,” coach Matt Parrish said after third-seeded Salisbury (21-2-1) advanced to Tuesday’s second-round home match against Patton. “He was hurt the first five or six games of the year — but he had something to play for tonight. We’ve been waiting for him to give us 60-65 minutes of high-octane, high-paced soccer. He put us on his back in the overtime sessions.”

Figueroa helped Salisbury prevail in a match that had little rhythm or rhyme. The Hornets never trailed, but never landed a knockout blow until he beat West Davidson keeper Nathan Morris on a pair of close-range shots just five minutes apart.

“It’s always tough playing a team from your conference,” Figueroa said after posing for post-game photos. “They recognize how we play and know what to expect.”

“I don’t know,” he tried to explain. “The ball bounced our way. There were significant chunks of that game where we were thoroughly outplayed. More grit, more hustle, more heart. That was West Davidson tonight.”

“Yeah, but tonight we played with a lot of energy and were able to match them for a long time,” said losing coach Joe Patterson. “It showed. They scored a goal and we got the equalizer. They scored again and we tied it again. It was a pretty even match.”

Senior Jack Fisher anchored the Salisbury defense, which played with diligence and determination. Yet afterward, he sounded less-than-impressed.

“We didn’t play our best and were still able to get the win,” he said. “That says we were doing something right.”

First-half goals by Salisbury’s Brayan Avilez and West’s Jake Crews set the tone. Avilez opened the scoring in the 11th minute when he took a doorstep feed from teammate Juan Salazar and flicked a shot that may have deflected off a defender. Crews answered three minutes later when he stole a ball from SHS defender Shawn Henderson along the left sideline and ripped a 30-yard shot that rocketed over winning keeper Josh Faulkner.

“Honestly,” Figueroa said, “we got a little too comfortable being one goal up and got caught lacking in the back.”

Avilez, a freshman forward, gave Salisbury a 2-1 advantage at 13:31 of the second half. He settled a long, through pass from left-footed Eriq Argrett and pushed a 10-yard bender past Morris.

“(Argrett) played it in from the left side,” Avilez said. “I actually thought Tony was going to shoot it but he let it go, I just hit it hard with the side of my foot and it curved in.”

The lead stood until West’s Jason Hamblin converted a corner kick with 5:32 left in regulation. Fisher pointed to a shoelace and claimed the tying goal glanced off his shoe.

“They went near-post from the corner,” Fisher reported. “I tried to clear it, but it rolled off the top of my foot and just floated over the keeper.”

“I felt frustrated,” Avilez added. “I really thought we had the game won. Then we go and put in an own goal.”

If nothing else, it amped up the drama and set the scene for Figueroa’s OT heroics.  He put Salisbury ahead for keeps with 6:21 remaining in the first of two 10-minute overtime periods, burying a tic-tac-toe feed from Argrett and Fisher. “I headed it down, it hit a defender and Tony headed it home,” said Fisher.

Figueroa was pleased, but far from finished. “I hit it full power with my head,” he said. “And I was glad we were back up, but for me that wasn’t the end of the game.”

That came, for all intents and purposes, with 1:24 on the clock when he settled a pass from Avilez and chipped a left-footed shot into the lower right corner. “I think we got caught staring on that one,” said Patterson.

When the final horn sounded, a sense of relief surrounded the Hornets.

“We very easily could have been beaten,” Parrish exhaled. “And that’s the honest-to-goodness truth. That team just never did quit.”

NOTES: Salisbury has won 10 straight matches and is unbeaten in its last 13 (12-0-1) since falling to Ledford on Sept. 11. … Patton (14-9-1), the 19th seed from Morganton, advanced with a 7-2 first-round win over East Henderson. The Panthers placed third in the Northwestern Foothills Conference. … Crews’ goal was his 15th. Morris, a junior, made 11 saves. … SHS held a 19-11 edge in shots-at-goal. … Figueroa’s goals were his 11th and 12th of the year. He also hit the crossbar on a first-half header. … Yellow cards were issued to Crews, Salisbury’s Will Austin and SHS assistant coach Taylor Strode, who was busted for throwing a ball on the field during live play. … The Hornets sported dyed-blond hair in a show of team unity. “It’s tradition to do something for the playoffs,” Faulkner said.