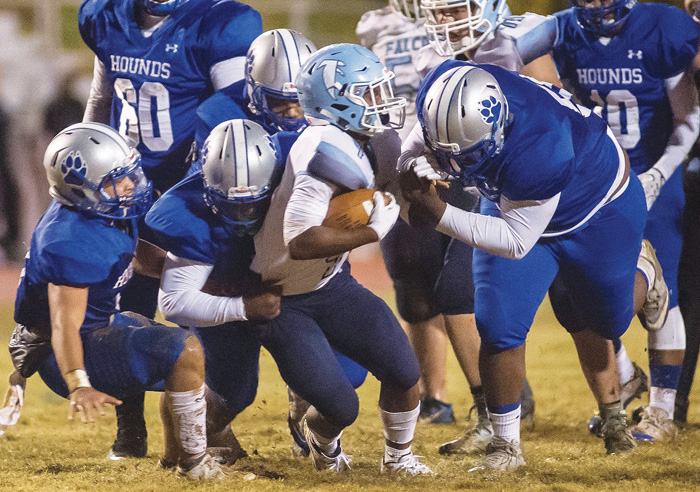 For Statesville’s Randall Gusler, it marked his 100th career coaching win in the state of North Carolina.

“Big game to get 100,” said Gusler, who picked up three victories at West Lincoln in 2005 before coming back to be head coach at Statesville, where he is 97-66. “But it was Senior Night. This was more about them.”

The Falcons overcame a 13-point halftime deficit and took the lead, 21-20, in the third quarter when Daniel Sell scooped up a blocked punt and returned in 35 yards for a touchdown.

Statesville refused to be denied in the fourth quarter, though, knocking West Rowan out of the title picture while keeping its hopes alive.

Chavion Smith’s 12-yard touchdown reception from Nebanye Moore on third down and goal appeared to be the dagger. The Greyhounds led by two possessions, 34-21, with 6:35 to go.

Reggie Everhart returned the ensuing kickoff 74 yards for a touchdown, and just like that West Rowan had new life.

A four-minute Statesville drive stalled at the West Rowan 14, giving the Falcons one last chance with 2:05 left.

West Rowan advanced the ball to its 43 before Daquanta Dobbins sealed the deal when he intercepted a deep Payne Stolsworth pass with 50 seconds remaining.

“It was a hard-fought game between two good teams,” Gusler said. “Seeing the kids fight back after (West Rowan) took the lead was awesome. This is a good group of kids.”

Statesville capitalized on Quintin Prince’s interception late in the second quarter, and it did so with a little trickery.

Moore pitched the ball left to running back Dorreco Davis. The senior sold the run. As West Rowan defenders approached Davis launched a pass, and Ky’waun Dukes hauled it in for a 30-yard touchdown catch that made it 20-7 with 2:31 left in the half.

PLAYERS OF THE GAME

Dukes and Smith were named the N.C. Farm Bureau Insurance co-Offensive Players of the Game. Dukes caught nine passes for 156 yards and a TD. In addition to his fourth-quarter TD reception, Smith carried the ball 10 times for 80 yards. That included scoring runs of 22 an 30 yards.

The NCFBI Defensive Player of the Game went to Statesville linebacker Kobe Turner. The senior was in on several tackles. His third-quarter sack stopped a promising West Rowan scoring drive on downs.

Moore completed his first seven passes for 137 yards and a touchdown. He finished 17 of 27 for 276 yards and two TDs.

Receiver Jasaiah Gathings caught six passes for 117 yards, including a 38-yard TD to begin the second quarter that propelled the Greyhounds to a 14-7 advantage.

The Falcons benefited from two special teams touchdowns. They managed only 182 yards against Statesville’s defense, and their one first-half touchdown was aided by 30 Statesville penalty yards.

Jalen Houston had five catches for 51 yards for West Rowan.

The game was halted with 10:01 left in the second quarter as EMS attended to Statesville defender Morgan Conner. The sophomore went down injured near the Greyhounds’ sideline on a third down play.

Initial reports were a lower body injury. Statesville fans cheered to show their support as he was carted off the field on a stretcher. Conner exited the stadium in an ambulance.

Statesville closes the regular season next week in Granite Quarry with a makeup game against East Rowan (6-4, 3-1). The winner shares the NPC title South Iredell (5-5, 3-1).

West Rowan’s regular season is complete. The Falcons now wait to see where they will be placed in the state playoff brackets.