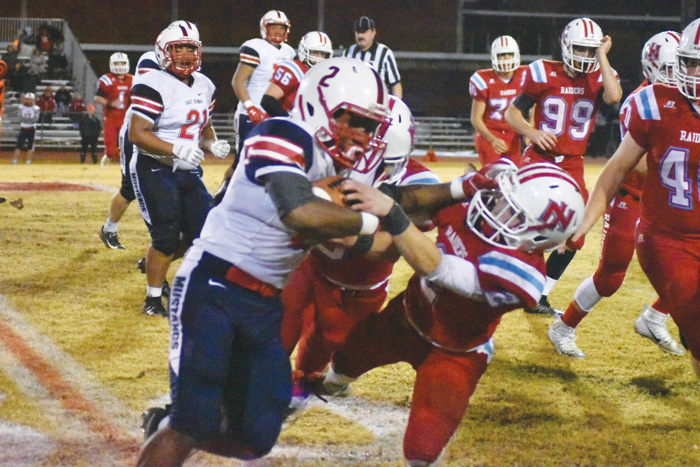 East, Statesville and South Iredell will take 3-1 North Piedmont Conference records into next Friday’s games. South Iredell (5-5) will be heavily favored to beat North Iredell (2-8, 0-4), while East (6-4) and Statesville (7-3) will go head-to-head in Granite Quarry.

The Mustangs didn’t get off to a great start offensively at North Iredell.

“They actually did a really good job of getting the water off the field, so that wasn’t a big problem,” East head coach John Fitz said. “It was slippery, but it wasn’t terrible. We just didn’t have very good field position early for our offense.”

Bennett, a linebacker/running back, had a pick-six to get the scoring started. That touchdown provided the only points of the first quarter.

East was conservative in the second half, moving the ball on the ground and grinding the clock behind its strong offensive line. Sophomore back Sammy Pinckney had over 100 yards by halftime and turned in another big game — 28 carries for 186 yards.

“They had eight in the box, but we were still able to run it,” Fitz said. “Our offensive line has done the job all year, and Pinckney is playing really well.”

East took the second-half kickoff, drove and scored. Bennett had a 3-yard scoring run to finish the drive and make it 27-0.

Bennett also scored on a 15-yard run with 4:04 left in the third quarter.

It was the third shutout for East’s defense and the first since August.

Now the Mustangs, who have won the turnover battle most of the time this season, have an opportunity to play for a championship at home.

“When you start in August, this is what you’re shooting for,” Fitz said. “Statesville is quick and athletic, so we’ve got a challenge ahead of us, but this is where you want to be.”

Win or lose next Friday, the Mustangs are headed to the 3A playoffs.