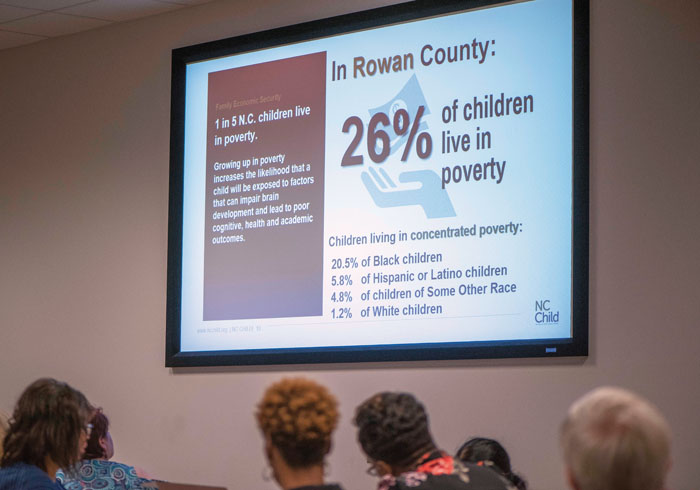 NC Child and others sponsored a forum at the Wallace Educational Forum on Friday for community leaders and legislative candidates to learn more about the issues facing children in Rowan County. Jon C. Lakey/Salisbury Post

SALISBURY — Here are some of the sobering statistics:

• About one in four Rowan County children — 26 percent — live in poverty.

• About 24 percent of Rowan children live in homes that are food-insecure.

• Only 51 percent of Rowan students are reading-proficient in the third grade — a marker that’s considered one of the most important predictors of future academic success.

“It’s just, to me, a siren that is singing out to us,” said Adam Sotak, public engagement director for NC Child.

A four-person panel gave a snapshot look at statistics on children and family well-being in Rowan County, while also speaking about access to affordable, high-quality child care, closing the health insurance gap, and linking schools and the community to foster more success stories.

Jason Walser, executive director of the Robertson foundation, also had input and introduced many of the speakers.

Later, local legislative candidates were invited to address the crowd, and they also participated in a question-and-answer session.

Those candidates included N.C. Reps. Carl Ford and Harry Warren, both Republicans. Ford is running for an N.C. Senate seat this year, and his opponent, Democrat Arin Wilhelm, also attended.

Other Democratic House candidates participating were Joe Fowler, who is running against Warren, and Gail Young, a challenger to GOP Rep. Larry Pittman, who did not attend.

All the participants seemed to agree with something Smart Start’s Brown mentioned about early childhood development and education: “Truly, this is economic development,” she said.

One of the major takeaways from many in the room, including the legislative candidates, was that North Carolina must seriously consider an expansion of Medicaid to provide health insurance coverage for the parents of children who, in most cases, already are covered.

“It ultimately rolls downhill” and affects children in North Carolina when their parents don’t have access to health care, Sotak said.

“When parents have health insurance,” NC Child adds in some of its material, “they have healthier babies, are better able to stay healthy and care for their children, and their kids are more likely to have and use health coverage.”

According to NC Child, an estimated 20,647 Rowan County adults have no health insurance. Of those, 12,929 have incomes between 50 percent and 100 percent of the federal poverty level.

Sotak noted that nearly 500,000 North Carolinians are estimated to be in “the health insurance coverage gap,” meaning they are either ineligible or earn too much to qualify for Medicaid and too little to pay for insurance in the marketplace.

Medicaid expansion is a big issue being talked about in the 2018 election, Sotak noted, and he said NC Child is excited to see the process move forward to possibly help working adults who need coverage.

“Let’s put the rhetoric aside,” he said.

Both Ford and Warren expressed more openness to expanding Medicaid in North Carolina than they have in past years. Warren said a different paradigm exists now. Before, when the General Assembly did not allow Medicaid’s expansion, the program was fraught with cost overruns and fraud, both men said.

Wilhelm, Fowler and Young all voiced support for expanding Medicaid.

One of the heartening statistics that Sotak shared was that the percentage of uninsured children fell 58 percent in Rowan County from 2008 to 2016.

Rowan’s number mirrors the overall state figures, showing that 96 percent of children in North Carolina are covered by some kind of health insurance.

NC Child reports that one in five N.C. children live in poverty, so Rowan’s 26 percent is higher than the state’s overall figure.

Of Rowan County’s children living in “concentrated poverty,” 20. 5 percent are black, 5.8 percent Hispanic or Latino, 1.2 percent white, and 4.8 percent children of some other race.

“Growing up in poverty,” NC Child says, “increases the likelihood that a child will be exposed to factors that can impair brain development and lead to poor cognitive, health and academic outcomes.”

Child care costs and access to quality preschools are other significant issues.

More than half — 57 percent — of the 3- and 4-year-olds in North Carolina are not enrolled in school.

Brown spoke of the importance of early-childhood initiatives in Rowan and how the first 2,000 days — from birth to kindergarten — are the most important for a child as his or her brain’s architectural framework is formed.

As for the cost of child care, a single parent spends 41.4 percent of annual income for infant care in a center.

Married couples who are at the poverty line and have two children pay 70.7 percent of their annual income for child care.

Sotak said 1,241 children in Rowan are on the waiting list for child care assistance out of 56,725 in North Carolina.

Street, director of early learning for Rowan-Salisbury Schools, noted the system’s expansion of pre-kindergarten classrooms, which are serving 100 to 120 additional students.

RSS has added eight pre-K classrooms and four exceptional children-specific classrooms, which include 3-year-olds. Street reviewed several pre-K initiatives the schools are doing and plugged the ApSeed Project, whose use in pre-K classes has helped children overcome word gaps that were holding them back.

“I think we’ve seen some really great data,” said Cabagnot, who toward the end of the program also reminded the participants, “We’re all in the same boat here.”