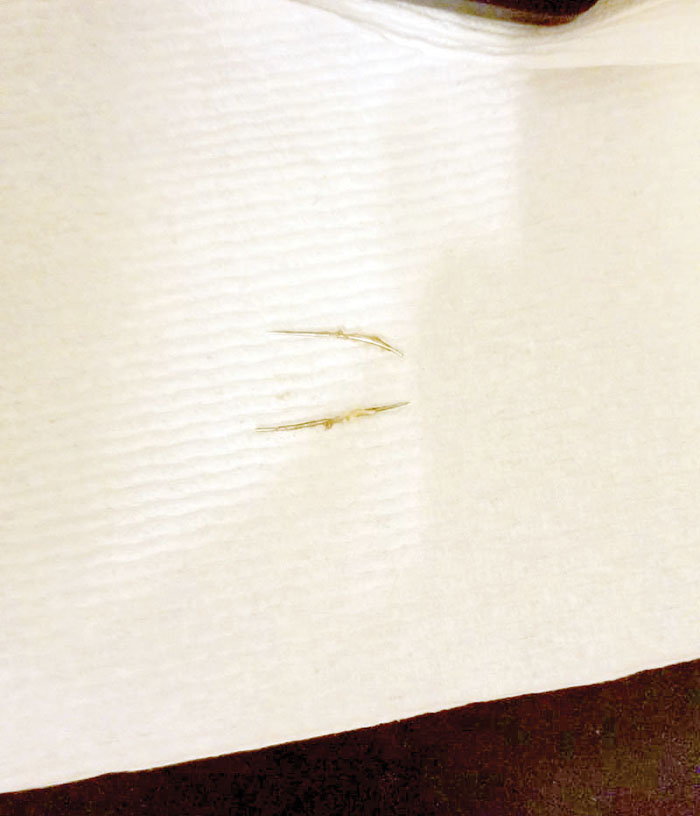 SALISBURY — The Rowan County Sheriff’s Office is investigating a second incident of a straight pin found in Halloween candy given out in a local neighborhood.

Authorities say a second family found two small straight pins inside a mini-Snickers bar that they believe was received in the Grace Ridge subdivision off Grace Church Road.

In the first incident, Howard Peacock Jr. took his two youngest children — 12-year-old Tristin and 14-year-old Bethany — to trick-or-treat in the subdivision on Halloween. Peacock said his son was eating a mini-Snickers bar and bit down on a straight pin.

The pin punctured the roof of his mouth. Tristin went to the hospital to be checked and was not seriously injured. But Peacock said his son has given up on trick-or-treating.

Peacock posted about the incident on Facebook as a warning to other parents. His post, which has been shared thousands of times, was seen by another local parent. The woman, who did not want to be named, had taken her child to the same subdivision, and the child was given Snickers candy.

The woman checked her child’s candy and found two pins inside. Just like Peacock, the woman said she could not remember at which house her child received the candy.

The woman said she’d been taking her children to that neighborhood for six years. In fact, her children have friends whose families live in the subdivision. She gave her children’s candy a cursory look the night of Halloween and let them eat a little.

Once she saw the Facebook post the next day, she went to sift through her children’s candy. She searched all of the chocolate bars and didn’t immediately find anything. When she got to the last few Snickers bars, she found two metal pieces that looked like a straight pin inside the candy.

“It was startling to see,” the woman said.

She admits that when she initially saw Peacock’s post, she was skeptical.

“I never imagined it would be close to home,” she said.

The woman said she really hopes it was not done maliciously by someone in the Grace Ridge subdivision, but rather a manufacturing mistake.

“You know when those things happen, obviously it’s scary that in today’s world people can’t go out or take their kids out to trick-or-treat and have something like this happen,” said Rowan County Sheriff Kevin Auten.

He said he believes this is the first time something like this has happened in the Rowan County area.

He was hesitant to say this was done maliciously by someone in the Grace Ridge subdivision, but said he’d have to do more research into the matter.

He asked if parents received candy from that neighborhood to contact the Rowan County Sheriff’s Office so that they can take it to Novant Health Rowan Medical Center for an X-ray.

He said they are looking into contacting the company that manufacturers Snickers to see if they are able to obtain some details that may help in the investigation.

Auten said he’s not saying the metal was placed into the candy at the manufacturer level, but he’s also not ruling it out.

At this point, there’s no way of knowing whether the metal was found in any other type of candy because they’ve only had the two incidents reported.

Auten said he’s not sure what the piece of metal actually is.

“I’m not convinced of what it is at this point,” he said.

“It does rip you inside to know something I did as a child is not safe to do anymore and I really don’t know how you fix it at this point other than try to backtrack and do some investigative work,” Auten said.

He hopes this was not the result of some “sadistic person out to injure people.”

The cases are being investigated by the Rowan County Sheriff’s Office.

Anyone who believes they also received candy, specifically mini-Snickers bars, from the Grace Ridge subdivision or who finds metal inside their candy is asked to contact Rowan Sheriff’s Sgt. Rodney Mahaley at 704-216-8711.