Missing his brother: ‘I didn’t know how tough he was’ 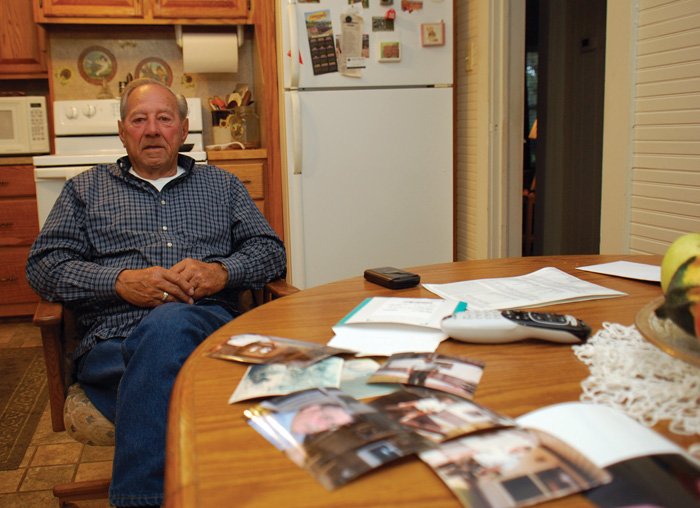 Mark Wineka/Salisbury Post Jim Karriker, who lives in the Corriher Grange community in southwestern Rowan County, sits in his kitchen with several family photos of his late brother Jerry spread out on the table next to him. Jim and Jerry stayed closed through the years, though Jim wishes his brother would have talked more about his days in the Army in Vietnam.

MOORESVILLE  — Jim Karriker recently visited the mausoleum at Gaston Memorial Park where his brother Jerry was laid to rest.

It’s been more than eight months now since Jerry died, and Jim still misses their many visits and conversations, mostly about the days growing up on the farm, their love of tractors and sometimes the Army.

But Jerry’s lungs simply gave out back in February, not long after he moved from the Hefner VA Medical Center in Salisbury to a rehabilitation hospital in Kings Mountain, closer to his home.

Maybe the Agent Orange from his brother’s days in Vietnam should be blamed, Jim says.

“He couldn’t breathe,” Jim adds. “He didn’t have no lungs — they were full of holes.”

Only since Jerry’s death has Jim been piecing together some of the information about his brother’s 28-year career in the Army and Air National Guard. Jerry was wounded twice on combat jumps in Vietnam and had received the Purple Heart.

Jim says he still carried shrapnel in his arm from a time he was pinned down during enemy fire.

Even though he knows hardly any details, Jim is most intrigued by Jerry’s being part of Fort Bragg’s elite 505th Parachute Infantry Regiment, whose insignia includes the blank panther.

“I didn’t know he was that tough, but he was,” Jim says from his kitchen table off Corriher Grange Road in southwestern Rowan County. “… He was a tough ol’ boy.”

From what Jim does know, his brother parachuted more than 200 times in the Army. In Vietnam, he started out as a Recon Ranger in the 25th Infantry. His training over the years came with the 82nd Airborne at Fort Bragg and the 101st Airborne at Fort Campbell, Kentucky. He rose to the rank of first sergeant.

Besides Vietnam, Jerry was stationed or rehabilitated at times in Germany and Hawaii. Jim proudly points out Jerry also was on the U.S. Army rifle team and knows for sure he competed once in Holland.

“He talked about Holland,” Jim says.

Jerry extended his military career with the Air National Guard and eventually retired and went on full disability.

“He was a well-decorated war veteran,” Jim says.

In their retirements, both brothers were all about old tractors and trucks, but especially tractors.

“Every time I’d buy one, he’d buy one,” says Jim, who belongs to the Stumptown Tractor Club and has gone to many tractor shows in the Southeast.

Jim’s pride and joy is a meticulously restored 1949 Allis-Chalmers “G” model. This bright orange beauty won a best-in-show in its category at the 2010 State Fair.

“Just something to piddle with,” 81-year-old Jim likes to say.

The brothers’ love for tractors was understandable, given their beginnings on the family farm off Corriher Grange Road.

“We knew all about the rear end of a mule,” Jim says.

Jim and Jerry grew up in a family of six girls and four boys — the children of Ervin and Margaret Karriker. The family farming tradition was handed down from Jim’s great-grandfather and grandfather to Ervin.

Jim and Jerry were only three years apart. “Me and him were close, all through our lives,” Jim says.

They were good shots, even as kids. They could position a country match on top of a fence post beside the barn and strike it with a rifle shot.

The Karriker kids went to Landis High, and Jim left school early to enlist in the Army. He missed having to serve in Korea and spent much of his Army hitch at Fort Richardson in Anchorage, Alaska.

Jim says it took him several weeks to adjust after he first arrived in Alaska.

“I said to myself, ‘What in the world did I get myself into?'” says Jim, who came to enjoy the place.

Jerry followed in his brother’s footsteps by joining the Army three years later.

After his stint, Jim came back home and worked for Carolina Tire Co. in Salisbury, General Tire Co. in Charlotte and Cannon Mills in Kannapolis. He and his wife, Frances, were married 58 years before Frances died in 2015.

“She was a wonderful woman,” Jim says.

In 1957, the couple built the home where Jim still lives, and it’s next to the place where Jim and Jerry grew up. The house has been remodeled three or four times, Jim says, adding “Whatever she wanted to do, we did.”

At his death, Jerry had been married 20 years to Nell. He had a son and daughter and two stepchildren.

Jim says Jerry was devastated by his daughter Kyanna’s death in a vehicle accident. She was a beautiful girl who had just been accepted into a modeling school in Atlanta, Jim says.

“After that, I think Jerry lost interest in everything for a long time,” Jim says.

In the obituary following Jerry’s death on Feb. 13, 2018, the family said one of Jerry’s favorite sayings was, “You’ve gotta have common sense.”