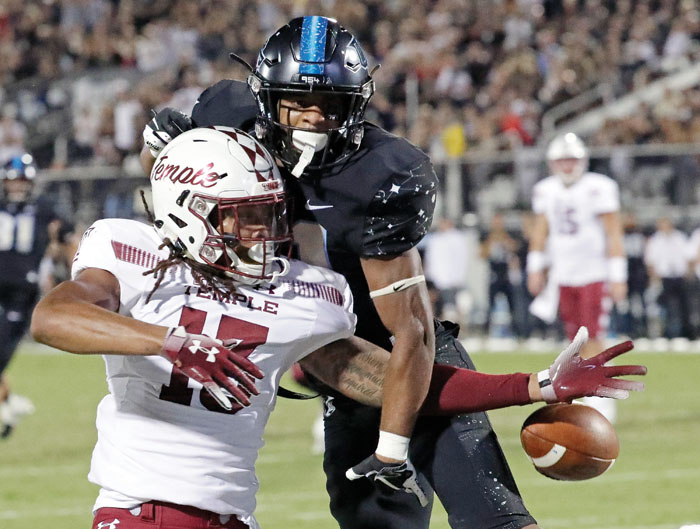 Taj McGowan scored on runs of 1 and 10 yards, the latter finishing a long drive that put the Knights (8-0, 5-0 American Athletic Conference) up by nine points after Temple (5-4, 4-1) nearly rallied to tie it.

Milton, returning to the lineup after missing a game with an undisclosed injury, finished 17 of 33 with one interception. Dredrick Snelson scored on a 19-yard reception and Michael Colubiale had TD catches of 9 and 19 yards to ensure the Knights gained sole possession of first place in the AAC East Division.

Anthony Russo completed 31 of 52 passes for 444 yards and four touchdowns for Temple, which had a three-game winning streak snapped despite gaining 670 yards on a night the teams combined to gain over 1,300 yards.

Ventell Bryant scored on receptions of 15 and 8 yards for the Owls. Russo also threw to Branden Mack and Randle Jones while building a 34-28 halftime that lasted less than a minute into the third quarter.

UCF took a 42-34 lead into the fourth quarter and stopped a potential tying two-point conversion before pulling away for good.

The Knights, denied a spot in the four-team playoff field a year ago despite finishing as the only undefeated team in the FBS, were 12th in the initial CFP rankings released this week.

In the first half alone, the teams combined for 808 yards — 510 passing and 298 rushing — with Russo throwing for 277 and three TDs and Milton countering with 233 yards and two TDs. Both quarterbacks had a rushing TD in the second quarter, Russo scoring on a 5-yard run on a fake field goal play.

Temple: The Owls are 5-2 since Russo took over at quarterback following losses to Villanova and Buffalo to begin the season. Armstead returned from missing two games with an ankle injury, immediately making his presence felt with a 33-yard burst on the first play from scrimmage. The senior running back finished with 142 yards on 27 carries.

UCF: Milton had another big night, however the Knights kept the nation’s longest winning streak alive by running for 318 yards and doing a good job defensively of keeping Temple out of the end zone in the second half.

One of the knocks on UCF’s success is the Knights’ strength of schedule. Temple is the only team the defending AAC champions have beaten this season that currently has a winning record.

Ohio led 45-0 at halftime after Western Michigan turned it over five times. Rourke scored on a 6-yard sneak and he found Papi White in the back of the end zone less than three minutes later. DL Knock blocked a punt and Alvin Floyd returned it 13 yards for a 21-0 first-quarter lead.

In the second quarter, Jarren Hampton’s interception led to Rourke’s 13-yard rush for a 28-0 lead. Western Michigan fumbled it on its next two possessions, leading to a field goal and Rourke’s 8-yard TD pass to Adam Luehrman. After Western Michigan’s four-and-out, Rourke passed it to Isiah Cox for a 10-yard score with 47 seconds left in the half.

Western Michigan (6-4, 4-2) was held to 119 yards in the first half, with four fumbles and an interception.

Thunder rally from 19 down in 3rd quarter, top…