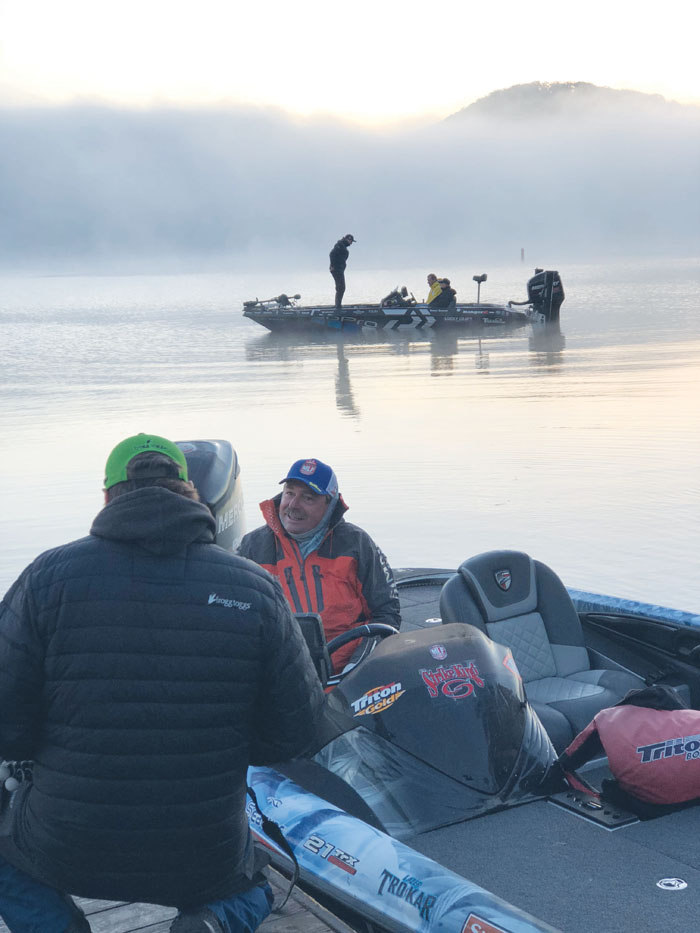 Submitted photo... Major League Fishing angler Shaw Grigsby speaks with someone before heading out onto one of Yadkin-Pee Dee lakes. The Outdoor Channel has been filming the MLF competition this week for airing at a later date.

SALISBURY — Three Rivers Land Trust, formerly The LandTrust for Central North Carolina, has announce that it has partnered to bring Major League Fishing, the number one rated show on the Outdoor Channel, to the lakes of the Yadkin-Pee Dee River watershed — including High Rock Lake.

Major League Fishing showcases 52 of the world’s top bass anglers. MLF began in 2009 when anglers and the Outdoor Channel came together and found a shared goal of showing competitive fishing at the highest level. The result emerged as a made-for-television tournament series.

in the same manner that they see in other sport organizations, such as the NFL, MLB, PGA, NASCAR, etc.”

“The anglers wanted fans to see the difficult, very real challenges that exist when pros try to outwit and outlast other competitors. They wanted to create a whole new game. The anglers decided they wanted “to take fans inside competitor boats for an up-close examination of how a professional bass tournament truly looks and feels.”

The first MLF event was filmed at Lake Amistad, Texas, in 2011 and aired on the Outdoor Channel in 2012.

During all days of competition, MLF anglers will fish 7.5 hours that will be divided into three periods, with 30-minute intervals between the end of a period and the beginning of the following period.

All MLF events shall utilize the MLF term “scorable bass.” A scorable bass is any bass caught that weighs one pound or greater. There is no limit to the number of scorable bass an MLF angler can catch and record during an MLF Cup event competition day. Use of nets and grippers for landing bass is prohibited.

Only artificial lures can be used. All bass must be caught in a conventional sporting manner.

Three Rivers Land Trust jumped at the opportunity to partner with Major League Fishing and to bring the competition to the central Piedmont of North Carolina. Bringing this popular television show to the region not only highlights the importance of our conservation work but it also showcases regions water resources.

In addition, this event will help promote local tourism opportunities and the local economy. The Doughnut Dinette in Albemarle and Morgan Ridge

Vineyards in Rowan County are providing meals for the anglers and production staff while they are filming.

Local Tourism Development Authorities (TDA) and Convention and Visitors Bureaus (CVB) across the region partnered with the Land Trust to bring this event to the region.

“This region boasts of more than 40,000 acres of water, making the lakes one of our largest natural resources. The locals have known for a while that the lakes have great fishing and now 52 of the country’s top anglers will learn just how amazing our lakes are! Not only do we get to show off our natural resources to the anglers but we also get to show our regions natural beauty to a nationwide audience,” said Chris Lambert, Executive Director, Stanly County CVB.

One of the main reasons for inviting the show to the region was to showcase the lakes of the Yadkin-Pee Dee watershed to a national audience. The Land Trust continues to fundraise for the permanent conservation of 4,700 acres of land and 76 miles of shoreline on High Rock Lake and Tuckertown Reservoir.

When these lands are acquired they will be owned in fee by the North Carolina Wildlife Resources Commission, where they will remain as public game lands in

perpetuity. The Land Trust has raised $5.7 million of $7.7 million to purchase the High Rock lake lands and has until September of 2019 to raise the remainder.

“The lands along the Yadkin have been available to the public as gamelands for decades,” states Three Rivers Land Trust Executive Director Travis Morehead. “They provide incredible public access and critical forested river buffers that enhance the water quality of the lakes they surround. If we are unable to raise the necessary funds for the state to purchase them, that public access and excellent water quality could be lost,” Travis said.

Local hunters and fishermen who enjoy these lands can make a donation to their acquisition by visiting www.threeriverslandtrust.org/alcoa-lands-conservation or calling the Land Trust office at 704-647-0302.

Anyone needing more information on how they can assist Three Rivers Land Trust in its mission to conserve special natural areas, family farms, rural landscapes and historic places in our ten-county region, please contact Crystal Cockman at crystal@threeriverslandtrust.org or 704-647-0302, or visit the website www.threeriverslandtrust.org.

Three Rivers Land Trust works with private landowners and public agencies to conserve the most important natural, scenic, agricultural, and historic places in a 10-county region of the central Piedmont.

Since 1995, the Land Trust has worked to offer reasonable and attractive options to landowners who want to save their lands for future generations to enjoy. The mission is to work thoughtfully and selectively with property owners to conserve our lands, vistas, and the essential nature of the region.