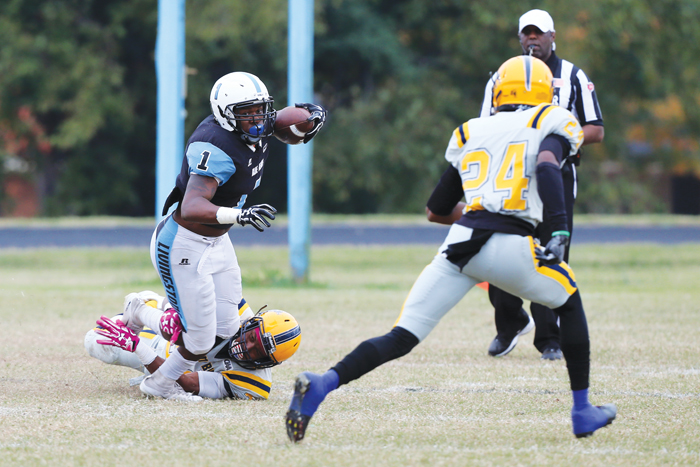 SALISBURY — Another edition of the Commemorative Classic will be staged on Saturday in Charlotte when Livingstone visits Johnson C. Smith. Game time at Irwin Belk complex on the JCSU campus is 1 p.m.

The classic commemorates the birth of black college football, as J.C. Smith — known as Biddle Memorial Institute until 1922 — and Livingstone played for the first time on Dec. 27, 1892, on Livingstone’s snow-blanketed front lawn.

Biddle won that first game, 5-0, and since that time, J.C. Smith leads the all-time series, 47-31. That record includes last year, the 125th anniversary, as the Golden Bulls defeated the Blue Bears in Salisbury, 27-14.

Livingstone last won in the series in 2015, 35-12, as the Blue Bears’ all-everything quarterback, Drew Powell, closed out his home career in style.

Both teams are again struggling through the season, as Livingstone takes a five-game losing streak into the contest. The Blue Bears are 2-6 overall and 0-5 in the CIAA.

Coach Daryl Williams has seen his top three quarterbacks injured and last week against the Broncos, sophomore Ryan Williams was at QB for the first time this season.

Miles Hayes, who has started for most of the season, and backup Xavier Longerbeam, both injured ankles in the final home game against Shaw on Oct. 13. The next week, transfer Alexis Archie, a North Rowan High School product, played well at Winston-Salem State, but suffered an injured shoulder.

Coach Williams said that Hayes has recovered first and took most of the reps at practice on Thursday. Longerbeam is coming along with his ankle sprain, but the coach said that Archie’s should is “still healing.”

Hayes, a freshman from Port Charlotte, Fla., started the first five games of the season and completed 52 percent of his passes for 982 yards. He has 10 touchdown passes and five interceptions. He has also rushed for 154 yards and a touchdown, on 48 carries.

“As of right now, Miles will be the guy that will have to go,” continued Coach Williams. “It will be exciting to have him back out there. Hopefully, he will be good to go.”

Williams was disappointed in his team’s loss last Saturday in Fayetteville.

“I want to see how we respond, after that loss,” said Williams. “All season, we played hard and fought all the way. I don’t think our effort was there last week — where it has been all season.”

Livingstone had a game at Lane (Tenn.) canceled on Sept. 15, due to Hurricane Florence. But Williams said it won’t be made up and that Saturday’s game in Charlotte is the season finale.

It will be the last game for 14 Livingstone seniors, including four-year players Armond Cox, a defensive tackle,  Gregory Hines, a defensive back, and running back Marcus Baisy Jr. Also playing his final game will be the reigning “Mr. Livingstone,” receiver Everett Ransom.

“It’s going to be a hard fought game and we’ve just got to keep the mistakes to a minimum,” added Williams. “I’m just so happy to have most of the team healthy, especially on defense. I feel real good about our chances, due to the practices we’ve had this week. One thing we do know, when Livingstone plays J.C. Smith, you can throw the records out. It’ll be two old rivals going at it.”