In North Carolina, GOP banks on Trump to save House seats 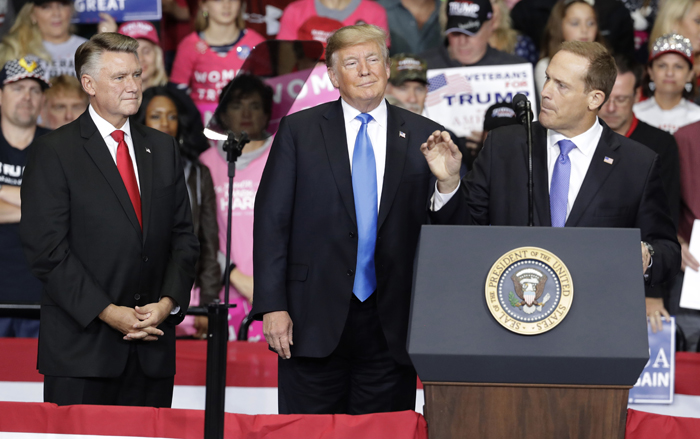 CHARLOTTE — The GOP nominee for a historically Republican congressional seat in North Carolina finds himself in an unusual situation: behind in money and overmatched on the airwaves.

But Southern Baptist minister Mark Harris , one of three Republicans fighting to retain North Carolina congressional districts amid a surge in Democratic energy and fundraising, is banking on the force that is Donald Trump to help him extend the party’s 55-year streak in the 9th District.

The president has traveled to North Carolina, which he won in 2016, twice since August to stump for Harris and 13th District first-term Rep. Ted Budd . Both are locked in tight races against Democrats outraising them and portraying themselves as moderates who won’t succumb to partisan strife on Capitol Hill.

Harris and Budd “will be incredible fighters and have been. They’ve been fighting all their life for great things, and they’re fighting for your interests,” Trump said while appearing with the two men at a Charlotte rally last week. He called Harris rival Dan McCready an “extreme liberal” and Budd challenger Kathy Manning “a lefty.”

Along with the Raleigh area 2nd District, the seats are among the scores of competitive House districts nationwide that will decide whether Democrats retake the chamber. Winning at least one of these North Carolina seats would signal a good night for the national party. Seven other Republican congressional seats in the state, along with three held by Democrats, aren’t considered very competitive.

North Carolina is considered a swing state in presidential campaigns, but Republicans have dominated state politics due partly to redistricting. Federal courts have twice ruled GOP mapmakers illegally manipulated the lines in 2016 through political data to ensure Republicans retained a 10-3 margin in the congressional delegation. Republicans disagree, and the map remains in place while the U.S. Supreme Court decides whether to hear the case.

Whether or not lines are ruled unlawful, the three districts were expected to be more competitive during midterms, when the party out of the White House historically makes gains, Duke University political science Professor David Rohde said.

“I’m not surprised Republicans are in a difficult position,” Rohde said. Gerrymanders aren’t designed to create a lot of safe seats for the prevailing party, he added, but rather many districts with marginal advantages.

The most favorable-looking seat for Democrats is the 9th, represented by Republicans since 1963. Conservative and affluent Charlotte area precincts have helped the GOP retain the seat since an era when the state’s congressional delegation was mostly Democratic. Still anchored by Charlotte, the district now extends to rural counties near South Carolina and toward Fort Bragg. Trump won the district in its current configuration by 12 percentage points in 2016.

Democrats found an apt candidate for the socially conservative district in McCready, an Iraq War veteran who featured his baptism in the waters of the Euphrates River in a commercial. He declares he won’t back Nancy Pelosi for House speaker.

McCready recalled his Marine platoon in explaining his political views. “We never cared about where you came from, who your parents were, the color of your skin or your political party,” he said in an interview with The Associated Press. “We’re all in this together. We’re all Americans first. That’s what I think they’re missing up in Washington.”

McCready’s campaign got a boost when Harris upset Republican Rep. Robert Pittenger in the primary. Harris then had to start fundraising from scratch, while McCready had raised $4.9 million through mid-October, according to campaign finance reports. Harris has raised over $1.8 million. Outside groups have spent millions more.

For some 9th District voters, it’s all about Trump.

“I like what President Trump is doing. He’s helped me to retire early,” said Wendy Underwood, a 68-year-old unaffiliated voter who picked Harris. If Democrats take the House, she added, “they’re going to start impeachment proceedings that are just going to get this country off what we should be focusing on.”

“It’s a lot of people who are truly angry with the tone of this administration,” Todd said. “I hope this will be a referendum on it, and I hope we send a message.”