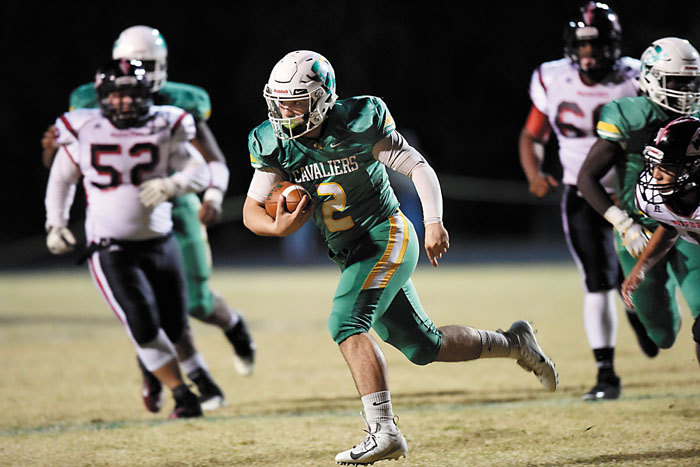 The rout included one of the earliest running clocks in history. With the Cavaliers leading, 43-0, with 8:32 left in the second quarter, a running clock was employed the rest of the way.

Malcolm Wilson scored three touchdowns on runs of 49, 13 and 2 yards,  boosting his county-leading total for the season to 22. He carried 13 times for 176 yards.

Mitchell threw a short scoring pass to Logan Stoner two minutes into the game, and a 2-point conversion made it 8-0.

Smith scored on a 10-yard run before the end of the first quarter, and another 2-point conversion pushed the lead to 22-0.

In the second quarter, Smith got loose for a 69-yard scoring run and Wilson scored from 13 yards out.

A Tyshon Sifford interception near midfield and his long return to the South Davidson 2-yard line set up Wilson’s third score for a 43-0 lead.

That was the score at halftime.

North’s only second-half TD came on a pass play from Mitchell to Denerio Robinson.

Xzavier Davis recovered a fumble on a kickoff for North. Mitchell had two conversion runs, while Wilson had one.

The Cavaliers still have one regular-season game left to play and will be at North Moore (2-7, 1-4 YVC) next Thursday to make up a game postponed by Hurricane Florence.

Ninth-ranked North Rowan will be in the 1AA state playoffs and probably will have a bye in the first round.