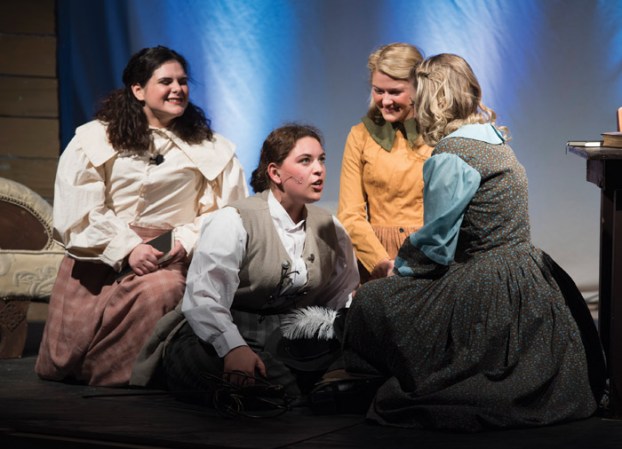 From left, Emily Owens as Meg, Taylor Koop as Jo, Savannah Shaver as Beth, and Shannon Harris as Amy in 'Little Women' at Lee Street theatre.

“Little Women: The Broadway Musical” is a sweet show, reminding lovers of the book why it meant so much to them.

The story, if you don’t know it, is about Marmee and her four girls, Meg, Jo, Beth and Amy. The girls have very different personalities and skills, but they love each other and Marmee. They are in Concord, Mass., their father away in the Civil War.

Caroline Stephenson is the gentle Marmee, holding the family together and dealing with her own fears.

The play covers several episodes in their lives over the years, scenes from Jo’s stories, scenes that tell more about the girls. We’ll meet their neighbor, grumpy Mr. Laurence, who undergoes a transformation. Marty Walker is just right for the part, at times bristly and at the right times, as soft as a puppy.

Nick Culp plays his grandson, Laurie, the family’s new best friend, and Jo’s confidant. Both Walker and Culp seem to be enjoying themselves.

The roles of Meg and Jo are double cast, so different audiences will see different performers depending on the night they attend.

The cast I saw included Taylor Kroop as a headstrong and lovable Jo, the sister who wants to see the world and write about adventures. Emily Owens is Jo Nov. 1-3. Kroop takes the role Nov. 8-10.

Owens played sweet and stable Meg the night I saw the musical. She’s the girl who wants nothing more than happiness and a little fun. She performs Meg Nov. 8-10 and Jo Nov. 1-3.

Claire Raimist plays Meg Nov. 1-3. In the performance I saw, she was Clarissa, the heroine of one of Jo’s blood and guts stories. On Nov. 8-10, she is Clarissa, too.

Those three had great stage presence, ideal singing voices, and in the case of Kroop, plenty of spunk. She really was Jo.

Savannah Shaver is the sweet, gentle, fragile Beth, always smiling, always looking for the good in people, mending fences. Shaver is angelic in this part and has many poignant moments.

Youngest sister Amy is played by Shannon Harris. With blonde ringlets falling down her back, she is the precious, prettiest sister, with the most insecurities and demands. She wants, she wants, she wants. Harris plays her as both good and problematic, fighting with Jo when she really wants to be like her sister.

Harris also did the choreography for the musical.

Tim Campbell, who is expanding his repertoire, plays shy Professor Bhaer, who lives in the same boarding house as Jo, when she is in New York, trying to become a writer. Campbell has a surprisingly versatile voice, ideal for the quiet man Jo turns to for advice.

Wendy Weant, another stage veteran, is snobby Aunt March and Mrs. Kirk, who owns the boarding house. As Aunt March she is all mannerisms and bluster. As Mrs. Kirk, she is a woman who really cares about her boarders.

Tim Bishop takes the role of John Brooke, the young man who steals Meg’s heart. He, too, had a lovely voice, and a good time. Lauren Stephenson appears as a ballroom dancer Nov. 8-10.

Lee Street’s Rod Oden created a multi-level set that gives the cast plenty of space to tell their stories. Craig Kolkebeck again directed with a good understanding of the message, and let the timeless story tell itself. His casting is impressive.

And a shout-out to stage manager Rona-Lyn Dizon, who has more than a thousand things to keep up with, including the large cast.

The play is in two acts, with a 15-minute intermission. The musical numbers tell the story, too, and John Stafford directs the small orchestra that plays on the set. Hearing the actual instruments, not electronic mimics, made a difference.

You may not hum the songs after the show, but the numbers fit well and express a great deal of emotion.

The costume crew, too, had quite the job finding and creating the Civil War era costumes. So many dresses!

Rowan-Salisbury students eat from the farm