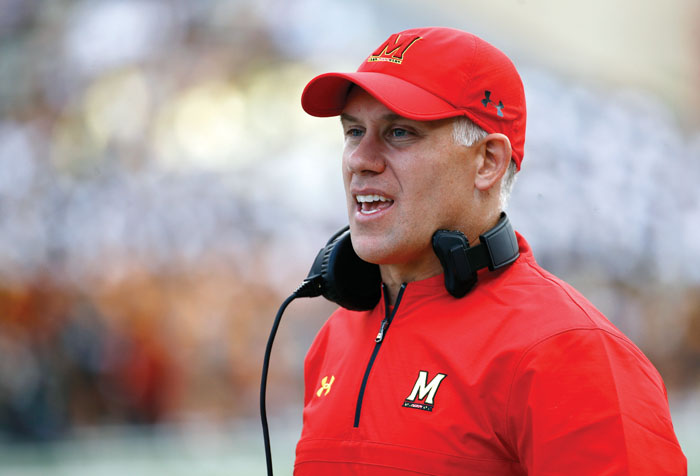 FILE - In this Saturday, Sept. 9, 2017, file photo, Maryland head coach DJ Durkin stands on the sideline during an NCAA college football game against Towson in College Park, Md. The University System of Maryland's board of regents announced Tuesday their recommendation that Durkin retain his job. Durkin has been on paid administrative leave since August, following the death of a player who collapsed during practice and an investigation of bullying by the Maryland coaching staff. (AP Photo/Patrick Semansky, File)

Durkin was fired Wednesday night, just over 24 hours after being reinstated.

Instead of resolving the issues facing the flawed program, the decision by the University System of Maryland board of regents on Tuesday to retain Durkin and athletic director Damon Evans created a different set of problems in the wake of a player’s death and discontent engulfing the football team.

Several state officials called for Durkin to be fired, and one called the decision to retain him an “embarrassment.”

“The overwhelming majority of stakeholders expressed serious concerns about Coach DJ Durkin returning to the campus,” Loh wrote in a statement.

“The chair of the Board of Regents has publicly acknowledged that I had previously raised serious concerns about Coach Durkin’s return. This is not at all a reflection of my opinion of Coach Durkin as a person. However, a departure is in the best interest of the University, and this afternoon Coach Durkin was informed that the University will part ways,” Loh wrote. “This is a difficult decision, but it is the right one for our entire University.”

“Dr. Loh’s firing of Coach Durkin is the right decision and the decision that had to be made if the UMD community was going to ever move forward,” Brown said.

Durkin’s dismissal comes while he was in the third season of a five-year, $12.5 million contract he signed in December 2015. He will be owed about $5.5 million, according to buyout terms of his contract.

Matt Canada is expected to resume the role of interim coach. Maryland is 5-3 heading into Saturday’s home game against Michigan State.

Hired after serving one season as defensive coordinator at Michigan, Durkin had a 10-15 record at Maryland. The Terrapins went 6-7 in his first season, losing to Boston College in the Quick Lane Bowl, then fell to 4-8 in 2017 while coping with injuries to three different quarterbacks.

Durkin began his coaching career as a graduate assistant at Bowling Green in 2001 after playing four seasons there as a defensive end and outside linebacker.

He served three years as an assistant coach at Stanford from 2007-9 and was at Florida from 2010-14, spending the last two years as the Gators defensive coordinator.

Durkin was placed on administrative leave Aug. 11 while board of regents waited for the results of an investigation on the culture of the program.

After receiving that report, the board decided to bring him back, saying he was “unfairly blamed for the dysfunction in the athletic department.”

Prior to the news of Durkin’s dismissal, Gov. Larry Hogan demanded the board and Loh participate in a public meeting to explain how they arrived at the conclusion to retain the coach.

Hogan wasn’t the only politician looking for answers.

Del. Maggie McIntosh, a Baltimore Democrat who chairs the House Appropriations Committee, planned a hearing on Nov. 15 in Annapolis to “shine more light” on the decision-making process that led to the retirement of Loh — who announced Tuesday his decision to step down in June 2019 — while the coach and other athletic staff remained.

“Obviously, the regents had their press conference, and it actually has raised a lot more questions and is getting quite a strong reaction from policy makers, legislators and frankly, even the public,” she said. “I’ve heard words like ‘perplexing,’ ‘shocking.’”

Hogan’s opponent in the November election, Democrat Ben Jealous, wrote in a statement, “The University of Maryland has become a national embarrassment for putting the agenda of a few wealthy football boosters ahead of the health and safety of its student athletes.”

The decision to reinstate Durkin did not sit well with students, either.

On Thursday, the Executive Board of the Maryland Student Government Association planned an on-campus rally after saying it was “outraged with the decisions made by the board of regents.”

Durkin and Evans were on the job when McNair collapsed on the practice field on May 29 and died of heatstroke on June 13. After McNair’s death, the board of regents called for an independent investigation of the circumstance that led to the death and an external review of the football program.

Several media outlets reported that at least three players walked out of a team meeting with Durkin on Tuesday, and offensive lineman Ellis McKennie blasted the board of regents’ decision on Twitter.

Loh’s leadership was addressed in both investigations, and he did not emerge completely unscathed. He did personally apologize to McNair’s parents in August, saying Maryland would take “legal and moral responsibility” for the circumstances leading to their son’s death.