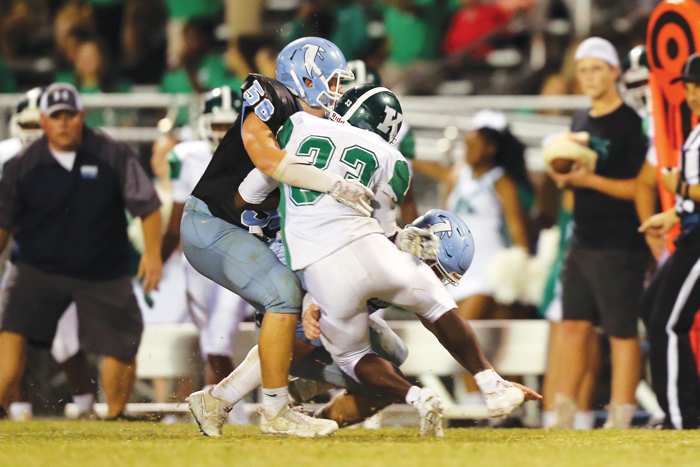 MOUNT ULLA — Some of the numbers posted by West Rowan’s defense this season aren’t typical — fifth in the county in rushing defense, fourth in scoring defense.

But while the Falcons (6-4, 3-1 North Piedmont Conference) have been punctured for 24.8 points per game and 187 rushing yards per game, they’ve still managed to win their share while playing the county’s most challenging schedule.

West defense, bending often, but breaking only twice, did its job against the Cougars, creating four turnovers and getting key red zone stops. As is always the case, senior linebacker Daniel Durham (6-2, 215) was a large part of West’s defensive charge.

“The way we line up, if everyone does their job, the linebackers will make most of the tackles,” Durham said. “We’ll miss some, but we try not to miss many.”

“Daniel has been playing at a high level,” West head coach Joe Nixon said. “He’s experienced, a guy who’s been an important varsity player for three years and a starter for the last two. Against Carson, he was reading the guards well and playing very physical.”

Carson is known for being well-coached, for being a second-half team that makes all the right offensive adjustments at halftime. Down 28-0 at halftime against West, the Cougars got back to 28-15 with about five minutes left, but the Falcons finished off the win.

When you play Carson you have to be prepared for the iso, the counter, the trap, the triple-option and the double-option. On the double-option, there’s no dive back involved. Quarterback Justin Smith sprints out, along with a pitch man, and reads the defensive end.

Carson also tries to beat you by out-numbering  you at the point of attack with shifts and with odd formations that you haven’t seen on film. The Cougars are tricky.

Durham had to adjust on the fly, at times, but he usually got to the right place at the right time.

“I made a lot of my tackles in the middle on the ‘isos,’ just tried to blow past the fullback to get to the ballcarrier,” Durham said. “And I made some tackles inside on the option stuff when they tried to cut it back. Carson wasn’t easy to stop. They’ve got quick backs.”

Durham has been reliable and relentless. He was in on 15 stops against Cox Mill and Concord and 14 against Davie County. He’s accounted for double-digit tackles eight straight games.

“The Concord game was probably my best because I had an interception that really helped us,” Durham said.

He also had two tackles for loss in that home win against the Spiders.

While Durham has been an important part of West football for a while, he’s probably better known for his work as a left-handed pitcher for the West Rowan and Rowan County American Legion baseball teams. Durham had an extremely positive Legion summer, with a 4-1 record that included a clutch win against Caldwell County to open the state tournament.

While Legion baseball is a daily grind, Durham spent a lot of days turning in double duty. There were a lot of morning football workouts before heading to Legion practices and games.

“I looked at it as my duty to try not to miss anything with our  football team,” Durham said. “And Legion baseball helped me a lot. I got faster, stronger and more flexible over the summer, and that’s carried over to the football season.”

While he enjoys football, Durham sees himself as a baseball player first. Catawba, Tusculum and St. Andrews are among the schools that have shown interest in his left arm, and he’s still got his senior season ahead of him this spring.

“We encourage our guys to be multi-sport athletes,” Nixon said. “The thing is when they play for Rowan Legion, you know they might be playing baseball into August, but we want them to be as successful as possible in Legion baseball. Daniel did a nice job of balancing both sports and getting better.”

The Carson game may have been the last home outing for Durham and West’s other 16 football seniors. They were recognized prior to the contest.

Coming up is this week’s regular-season finale at Statesville. It’s the homestretch, but West, East Rowan, Statesville and South Iredell all still have designs on the conference championship in a six-team league. All four have one NPC loss. West beat East. East beat South Iredell. South Iredell nipped Statesville by a single point and outlasted West in two overtimes. Statesville still has to play West and East.

“East Rowan beating South Iredell put us back in the conference race,” Durham said.  “That got us fired up.”

This week’s road game will be a tough test for West. Statesville is young, but talented and fast.

“We can’t miss tackles,” Durham said. “Against Statesville, a missed tackle might mean a breakaway.”

It’s not rocket science for West’s defense. The formula will be the standard one. West’s defensive line will try to keep Statesville’s big offensive line from getting to Suddarth and Durham, so West’s designated tacklers can do their thing.

“Defensively, we’ve got to run to the football, rally to the football, and gang-tackle,” Nixon said. “We can’t arm-tackle Statesville’s backs. They’ve got three good ones who can go all the way.”