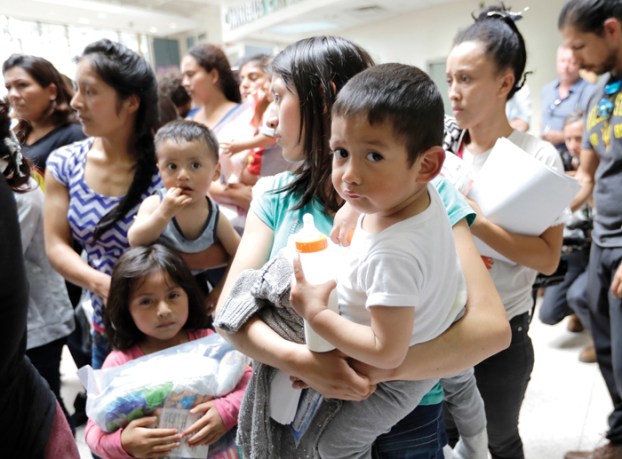 Democrats are AWOL on immigration

Day after day, President Trump Donald feeds his appetite for demagoguery on impoverished Hondurans. Now he is sending troops to the border. Meanwhile, Republican congressional candidates are loading the airwaves with demonizing invective aimed at immigrants.

So, where are the Democrats?

Otherwise engaged, to be polite, or more bluntly, AWOL.

Democrats are not contesting immigration this year. Republicans mention immigration four times as often as Democratsin campaign ads. Fifty percent of pro-Democratic ads aired in September were on health care, compared with just 4 percent on immigration.

The political calculation is obvious. “It is very difficult to win on immigration with vulnerable voters in the states Trump carried in 2016,” argued a strategy memo circulated among Democratic campaigns by two influential think tanks, the liberal Center for American Progress and the centrist Third Way. The memo claimed polls showed “even the most draconian of Republican policies” toward immigrants had failed to sway swing voters, and so Democrats should spend “as little time as possible” on contentious issues such as sanctuary cities, pivoting to health care instead.

When Trump talked big about revoking birthright citizenship, Rep. Nancy Pelosi (Calif.), the Democrats’ would-be speaker, retorted, “Clearly, Republicans will do absolutely anything to divert attention away from their votes to take away Americans’ health care.”

But who was really diverting?

At stake are children’s futures, constitutional values, national identity. Yet the Democrat who would benefit most from a victory next week decided it was expedient not to rebuke Trump on the merits.

Trump wants to make this midterm a referendum on a welcoming stance toward immigrants that has been Democratic doctrine for a half-century, and all the Democrats can say is that this campaign should be about something else. The loss of moral authority from abandoning this fight is certain to be greater than the political gain – of which there is no certainty anyway.

That’s not to say the Democrats are ignoring easy options. They now face internal divisions over immigration that are not made easier by the party’s history with migration out of the Northern Triangle of Central America — El Salvador, Honduras and Guatemala.

In 2014, when an even larger surge out of the Northern Triangle roiled a midterm election campaign, President Barack Obama adopted a send-a-message strategy designed to dissuade anyone contemplating a trip north, especially with children. Although he expressed sympathy for their plight, during his presidency Obama detained mothers and their children under conditions that prompted lawsuits, sent National Guard troops to the border and sought authority from Congress to conduct “an aggressive deterrence strategy focused on the removal and repatriation of recent border crossers.”

Trump, of course, has taken the deterrence strategy to brutal extremes far beyond anything proposed by Obama. Nonetheless, Obama earned the “deporter in chief” moniker by forcibly removing far more migrants in his first two years than Trump has managed so far, leaving an ambivalent legacy.

The Democrats are additionally limited because their proposals on immigration are mostly old, familiar and oft-defeated. The Dream Act, which would provide relief to worthy young people brought here without authorization as children, was first introduced in 2001 and failed in 2010 when Democrats controlled both houses of Congress. Comprehensive immigration reform was defeated in 2007 and 2014 but remains the Democrats’ go-to proposition. It was originally authored by Sen. Edward M. Kennedy (D-Mass.), who died nearly 10 years ago and has never been replaced as the Democrats’ champion and chief legislator on immigration.

New ideas are now at last emerging, but they are complicating the Democrats’ political calculus and threaten to divide the party.

“Abolish ICE” is a rallying cry among progressive candidates such as Alexandria Ocasio-Cortez, running for Congress in New York City, and others in urban districts with large foreign-born populations. Rage at U.S. Immigration and Customs Enforcement is palpable and justified among their constituents. For the same reason, big cities, home to the party’s base and its demographic future, gave rise to sanctuary policies that limit local law enforcement’s cooperation with ICE.

Surveys show that those propositions are considered overreach by moderate voters who otherwise oppose Trump’s harsh policies. With no direction coming from the top of the party, candidates in swing-district suburbs are running away from any criticism of ICE, let alone proposals to abolish it. On hot-button immigration issues, Democrats are left with multiple, contradictory positions.

Aside from modest proposals to expand development aid to the source countries, the Democratic leadership has not campaigned on policy solutions that might motivate their voters. Neither in 2014 nor any time since have they made concrete proposals on how many migrants ought to be granted asylum and under what conditions. They have railed against the asylum processing system that Obama presided over for eight years but have never offered a detailed plan to fix it.

Trump might yet provoke a backlash among swing voters. Hard-line immigration rhetoric has failed to carry the day in elections such as the Virginia governor’s race last year. And the Democrats’ strategy of playing down immigration in favor of health care might prove a winner.

But, win or lose, the Democrats will have paid a price. Their ability to contest Trump will be limited by their failure to confront him and to offer alternative policies. And, even if they win one or both houses of Congress, they will have no mandate to make immigration policy, because they never asked for one.

Suro is a professor of journalism and public policy at the University of Southern California.

October has ended, and I had hoped the news would not bring yet another story of a school “bully-related” death.... read more