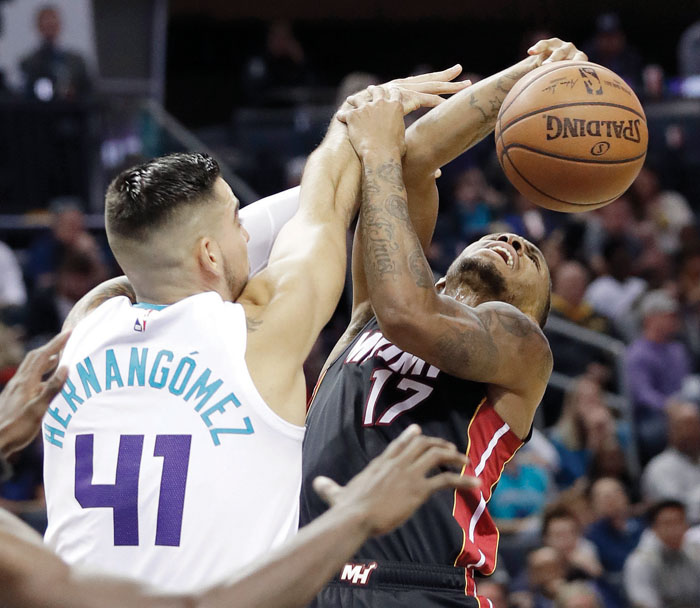 “I was serious, because it means something,” Parker said. “I feel like I’m a winner. I have won a lot in this league. And I think that is why they signed me.”

Parker is doing his best to make sure the Hornets get to the postseason, which would allow the longtime San Antonio Spur to reach the playoffs for the 18th straight season.

Parker had 24 points and 11 assists to lead a big night from Charlotte’s bench, and the Hornets beat the Miami Heat 125-113 on Tuesday night. In so doing, the 36-year-old Frenchman surpassed 19,000 career points and became the seventh international-born player to reach that milestone — joining Dirk Nowitzki, Hakeem Olajuwon, Dominique Wilkins, Tim Duncan, Patrick Ewing and Pau Gasol.

“This is a four-time NBA champion, a lot of pride, a lot of credibility. He wants to win, and he’s not satisfied with this win,” said Hornets coach James Borrego, who also coached Parker as an assistant with the Spurs.

Behind Parker, who provided a spark all game long with his scoring, passing and decision-making, Charlotte’s reserves outscored Miami’s 66-46. Reserve Malik Monk had 20 points and Michael Kidd-Gilchrist contributed 14 points and eight rebounds for the second unit.

Nic Batum had 20 points for the Hornets, who beat the Heat for the second time in 10 days.

Kemba Walker was held to a season-low 19 points, but played a big role by helping squash a fourth-quarter comeback sparked by Dwyane Wade, who led Miami with 19 points and made four 3-pointers. Walker knocked down a pair of 3s in the final 3½ minutes to push Charlotte’s lead back to double digits.

Batum said Parker is “just what we needed off the bench.”

“We needed that guy behind Kemba that can control the game and can push off of Kemba — and he’s doing good so far,” said Batum, who has played with Parker on the French national team.

“I think his poise, his demeanor, his pace, it just calms everybody down,” Borrego said of Parker. “People find the right spots. They’re in rhythm. It’s not helter-skelter. He’s got great rhythm there. He’s been doing this for 17 years. This is a pro who has played at the highest level in big competitions and he’s not fazed out there.”

Hornets: The Hornets exercised their third-year option on Monk before the game. The 6-foot-3 Monk came in averaging 11 points per game in his second NBA season. He was selected 11th overall in the 2017 draft.

It was the second loss in two nights for the Heat, who gave up 123 points to the Kings on Monday.

“Every time we had any type of momentum they just took it the other way,” Spoelstra said.

Wade didn’t have an answer for Miami’s defensive struggles, saying “we’ve played aggressive and we’ve played kind of the style of defense we want to play when we get down, but we haven’t done it consistently. That’s the biggest thing is trying to find consistency.”

Borrego said he is thrilled with the improvement from Monk in his second season. Monk was on the floor during a crucial stretch in the fourth quarter with Parker and Walker — and wasn’t afraid to shoot. The former Kentucky star finished 7 of 10 from the floor with four 3-pointers.

“That’s tough to guard,” Borrego said of the trio. “There’s shooting out there, there’s playmaking out there, the court was spread and we’re not only going to need him throughout the game, but the fourth quarter is a major time and that kid isn’t afraid of the moment.”