Going all out for All Hallow’s Eve 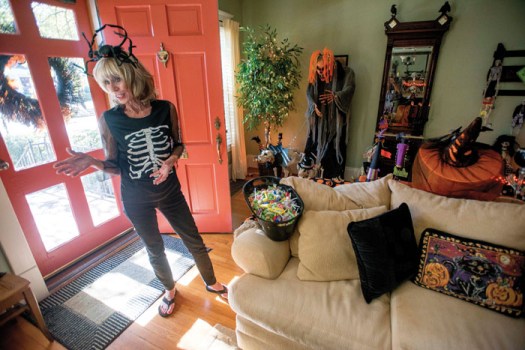 Nancy Wade has decorates her home inside and out for Halloween. Jon C. Lakey/Salisbury Post 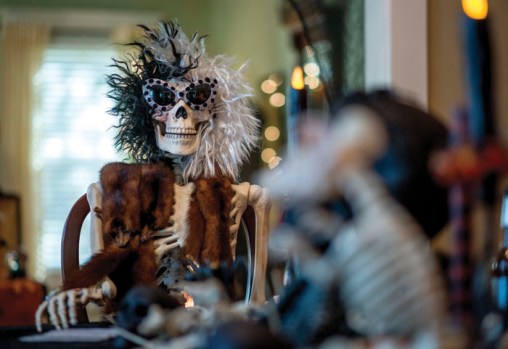 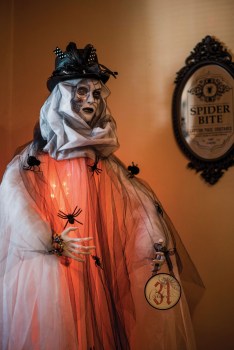 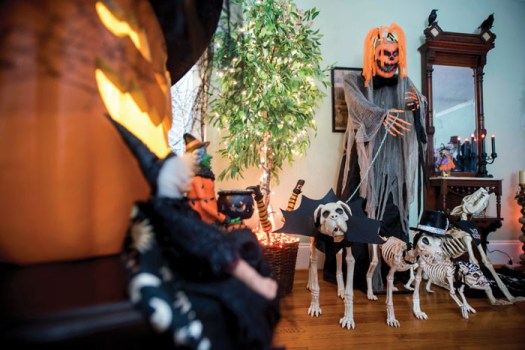 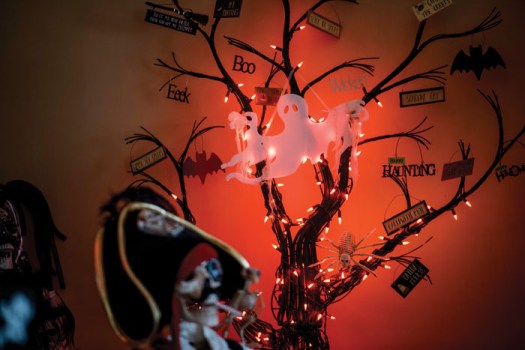 SALISBURY — There are people who get into the spirit of Halloween, and then there is Nancy Wade.

Trick-or-treaters might know Wade’s house in the 200 block of Maupin Avenue by the cemetery in the front yard. Among the 30 or so tombstones, guarded by skeleton cowboys sitting next to a campfire, is one that says, “I Told You I Was Sick.”

Hands and bodies are coming out of the ground. Ghoulish things are hanging from the shade tree, and some unsavory characters are sitting on the front porch.

But it’s the inside of Wade’s house — a world her friends like to tour every season but one that is off limits to trick-or-treaters — that really steps things up a notch when it comes to Halloween.

Some people do this kind of elaborate decorating for Christmas. Wade prefers going all out for All Hallow’s Eve.

When Wade sits down in the evenings to watch television, she has company — and it’s not just the bowl of eyes or the talking book of spells on the coffee table.

Standing or sitting around her are life-size skeletons that she has named and dressed in appropriate Halloween garb.

In a corner, Pumpkinhead is out for a stroll with his four canine skeletons, one of whom has an evil howl.

“Come closer,” Pumpkinhead says, but you’re not sure that’s a good idea.

The Grim Reaper holds a position next to the fireplace.

“I think he’s pretty scary,” Wade says. All the skulls on the mantel, enhanced by orange lighting, would agree.

Is that a werewolf skeleton relaxing in a chair along the wall? And the cat skeleton nearby startles you with a hissing snarl.

“This is the one that scared the dog across the street so much, he ran out,” Nancy says apologetically.

Her Dracula skeleton stands by the archway leading into the dining room, where a couple of pirate skeletons and a third Wade has dubbed Cruella de Vil are sitting around the table.

One pirate has rolled snake eyes in front of him. The other pirate has drawn a dead man’s hand in cards. Cruella seems to be dining on the skeleton of a frog.

In one dining room corner is Spider Lady. In an opposite corner is another Dracula skeleton who drinks blood and likes to talk about it.

“My favorite is O negative,” he says.

A Halloween telephone rings on a side table. Wade picks it up and someone on the other end implores, “Come with me to the grave.”

Wade seems to have Halloween decorations in every room. The kitchen has a place for “broom parking” and a lighted sign for Dracula’s Pub. The bathroom offers a glass jar of blood salts, not bath salts.

If you aren’t careful, you might step on a hand scooting around the floor. That’s Thing from “The Addams Family,” Wade explains.

During trick-or-treating tonight, you’re likely to see some great costumes.

Coming to your door will be superheroes such as Wonder Woman and Black Panther, skeletons, ghouls, zombies, witches, ninjas, princesses, “Star Wars” characters and maybe a Freddy Krueger or two.

But let’s give it up, too, for the people such as Wade who go to great lengths to decorate their homes for Halloween.

Count Carrie Adams (no relation to the Addams Family) among them.

Her three children are grown and out of the house now — two are married and the other is in college — but that doesn’t stop Adams from having skeletons crawling up the front of her house toward an upstairs window.

Nor does it keep her from having what she describes as her nasty and ugly Granny figure, dressed in a hospital gown, rocking on the front sidewalk in a wheelchair. Granny is holding two-headed babies.

“People love that,” Adams says. “That’s probably my favorite, too.”

These things are just the tip of the iceberg of Adams’ Halloween decorations, which have been a hit on Wiltshire Road (the 1600 block) for many years.

In 2017, for the first time in many years, Adams decided not to decorate for Halloween.

“I had this lady come by later in the evening, and she said, ‘Oh, my gosh, where’s your stuff?'” Adams recalls.

It turned out the woman from Rockwell always brought her family to Milford Hills to trick-or-treat, and she saved the Adams house as the grand finale.

It was enough to prompt Carrie to decorate again this year.

Her zeal for Halloween decorating started with her kids and living in a Milford Hills neighborhood that was great for trick-or-treating. “The kids got so much fun out of it,” Adams says.

She would stay at the house giving out candy, while her husband, Todd, accompanied their kids through the neighborhood.

Adams accumulated and collected so many Halloween decorations over time, she outgrew the storage space in the basement and had to have an outbuilding for the stuff.

But she acknowledges the decorations represent a big job each Halloween — the getting out, putting up and packing away.

“I just told my friend that it’s tough,” she says.

Carrie and Todd Adams now have a granddaughter who can look forward to Halloween at their house. The funny thing is, Carrie Adams says she is not a fan of horror movies.

Back in Fulton Heights, Nancy Wade says she finds her Halloween decorations at places such as Walmart, Dollar Tree, Big Lots and an online catalog source called Grandin Road.

Besides all her human-size skeletons around the house, Wade has numerous figurines and statues, such as Frankenstein and the Bride of Frankenstein, the headless horseman, ravens and crows.

Big spiders cling to windows and chandeliers. She even has a Halloween tree, not a Christmas tree.

When it comes to her Christmas decorations, Wade says they are more serene — greenery and white lights, not 6-foot vampires.

It takes Wade about a week to put everything up, and she starts with her inside decor in mid-September, just so she can enjoy it longer.

“I do have a lot of friends bringing their grandchildren over to see it,” she says, looking around the house. “This is like 10 years worth of collecting.”

Wade built a 10-by-24-foot addition to her garage to store her Halloween decorations.

Like Milford Hills, Fulton Heights is one of those Salisbury neighborhoods that sees plenty of traffic on Halloween. Last year, one of Wade’s neighbors, holding a counter, tallied 1,000 trick-or-treaters.

Wade says she has 1,000 pieces of candy ready to hand out tonight.

“Halloween is my favorite holiday,” she says.

Just don’t pick up the phone.