Other Voices: Keep calm about caravan 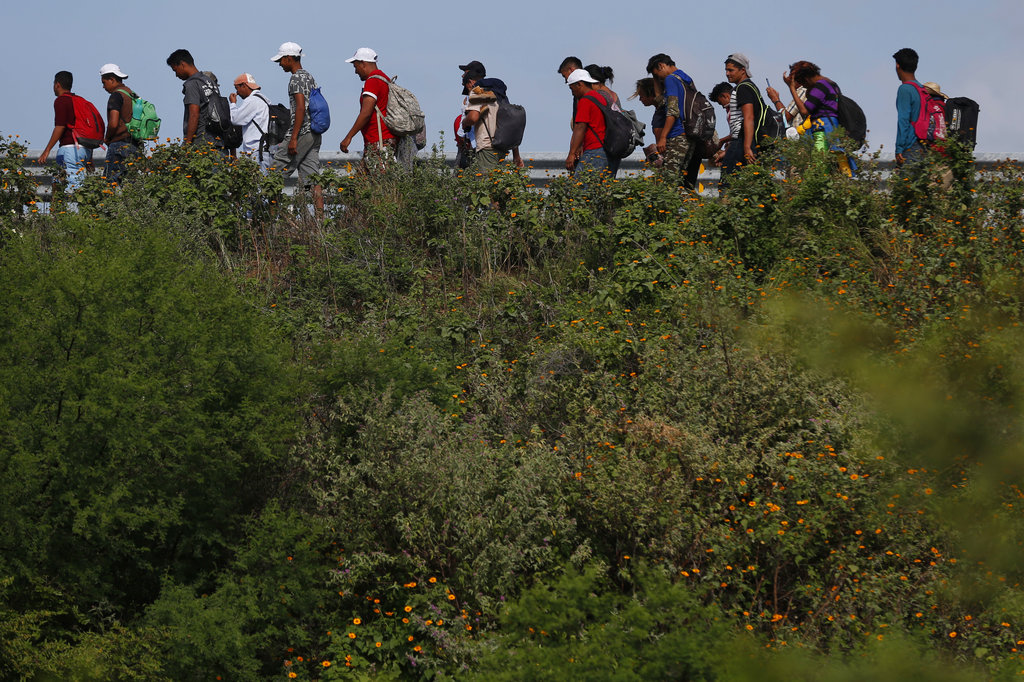 Migrants walk along the highway as part of a thousands-strong caravan of Central Americans continuing its slow journey toward the U.S. border, between Niltepec and Juchitan, Oaxaca state, Mexico, on Tuesday. (AP Photo/Rebecca Blackwell)

When someone sitting at home hears an unexpected knock at the door, the question arises: Does the person on the other side mean well or ill? When a throng of foreigners begins a long march toward our border, Americans understandably wonder about their intentions. The caravan of several thousand people coming north through Mexico has stirred all sorts of fears here at home.

The concerns have gotten some, well, encouragement from the administration, with the president saying the group includes “criminals and unknown Middle Easterners” and the vice president attesting, “It’s inconceivable that there are not people of Middle Eastern descent.” The gunman who allegedly carried out a mass slaughter at a Pittsburgh synagogue had claimed that a Jewish organization that works with refugees “likes to bring invaders in that kill our people.”

But the actual grounds for fear are sparse. The president offered no evidence that dangerous thugs have joined the march with hopes of preying on Americans. Most of the caravan members are reported to be women and children, and it’s not clear how many will finish the journey. Almost all the suspected terrorists apprehended trying to get into this country are nabbed when they arrive at airports.

A large share of the people in the procession apparently mean to apply for asylum when they reach the border, as the law allows them to do. The great majority of those applying from Central American countries in recent years have been rejected, and under the Trump administration, no one should expect an easier process now.

To qualify for asylum, the law requires applicants to show “a well-founded fear of persecution” based on “race, religion, nationality, membership in a particular social group, or political opinion” or a likelihood of being tortured if returned home. Mere poverty is not sufficient. They are interviewed by federal asylum officers, and those who can’t demonstrate a “significant possibility” of qualifying are ordered removed. The others are allowed to stay, mostly in detention, until their cases are resolved.

No doubt some of the caravan members will weigh the odds and decide they have a better chance of sneaking over illegally. But if even a few thousand were to try it, they would pose no unusual challenge to the Border Patrol _ which apprehended nearly 6,000 people every week last year crossing from Mexico. The administration has also announced it will deploy 5,000 troops to the border as an extra safeguard, on top of 2,000 National Guard forces sent earlier.

There’s always the worry that people who come here because of alleged persecution at home could be potential terrorists bent on killing Americans. During the campaign, Donald Trump promised “extreme vetting” of foreigners coming here.

But the vetting was thorough even before. Since the 9/11 attacks, Cato Institute policy analyst David Bier found only 13 cases where radical terrorists managed to get in legally — and only one where it led to a lethal attack. “The rate for deadly terrorists was 1 for every 379 million visa and status approvals from 2002 through 2016,” he calculated.

A body of evidence indicates that immigrants in general are less likely to commit crimes than native-born Americans. The New American Economy Research Fund looked at the 10 cities with the highest rates of refugee arrivals and found that “nine out of 10 of the communities actually became considerably more safe, both in terms of their levels of violent and property crime.”

Certainly the caravan is a reminder of the need for solid border security and careful screening of those who want to enter the United States. The administration is right to focus on those obligations. But the horde of people walking in our direction are not cause for alarm.