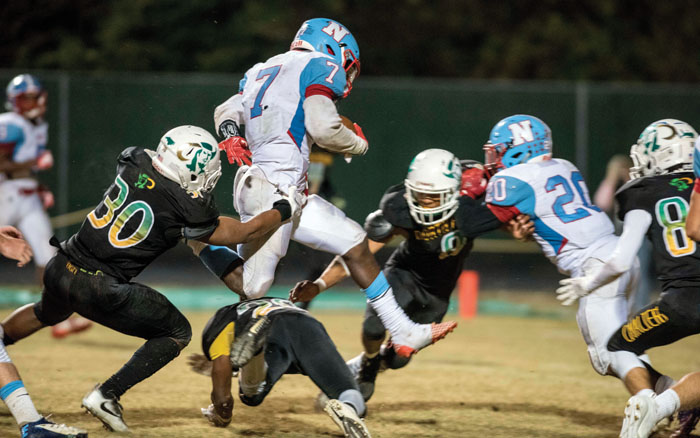 SPENCER — Football is a generational game, with genes for wheels or strength or tenacity frequently handed down from fathers to sons.

Lots of sons inherit the strong arm, the broad shoulders or the good hands.

“Play like your dad,” is something a lot of players hear during the week or as they head on to the field. North Rowan junior linebacker Jordan Goodine (6 feet, 200 pounds) hears it more frequently than most because his dad wasn’t just pretty good, he was awesome.

Rodney Goodine stood only 5-foot-10, but he came from Seneca, S.C., to become a first team NAIA All-American as an inside linebacker for Catawba College in the late 1980s.

Jordan not only has family tradition to live up to with regard to his father, he also is a following an older brother who earned accolades. Javin Goodine was an all-county linebacker for the Cavaliers in the 2015 and 2016 seasons, a rugged competitor who turned in 100-tackle campaigns. A chip off the old block, Javin was not tall, but he was enormously strong.

Jordan played like his father and his brother in Thursday’s 46-7 Yadkin Valley Conference win against West Montgomery.

West Montgomery is a run-heavy team. A high percentage of the Warriors’ 46 rushing attempts crashed headlong into Jordan. He was credited with 26 tackles, 12 primary stops and 14 assists.

“I was just trying to fly to the ball,” Jordan said. “I’ve got a goal of at least 100 tackles this season, and I needed a game like this. This was probably the best one I’ve ever had.”

After Jordan watched film of the game, he sheepishly reported to the coaching staff that he believed he’d made 23 tackles.

“He actually shorted himself three tackles, and that’s probably a first,” North head coach Ben Hampton said with a laugh. “He had 26.”

Jordan had 16 tackles in the shutout of Carson, another run-heavy squad. Even against North Stanly, on a night when nothing went right for the Cavaliers, Jordan made 11 stops.

Jordan’s dad has been there all along, of course. Providing a push. Providing advice and providing critiques, but also providing support and praise.

“One of the things my dad has always told me is that a good linebacker gets in on one out of every three plays,” Jordan said. “We were coming off a tough loss to North Stanly and I was just determined to be a good linebacker and make a lot of tackles.”

Jordan played mostly on the NR jayvees as a freshman, He was 5-9, 220, in those days. He was elevated to the varsity for the playoffs.

In the third round, North was playing at Reidsville, the eventual 2A state champion. Nautica Patterson broke a hand, and Jordan was suddenly on the field against some serious competition.

“That was a heck of a way to be thrown into the fire against Reidsville in a third-round playoff game,” Hampton said.

He learned from it.

As a sophomore, Jordan played at 235 pounds.

“He was a pretty good linebacker for us last season,” North defensive coordinator Josh Sophia said. “But then he transformed his body from last season to this one, and he picked up his speed quite a bit. Now he can make  a lot more plays to the wide side of the field.”

North’s 4-2-5 defense has led the county all season in the critical categories of rushing yards allowed and points allowed. Goodine and Patterson have been terrors at the linebacking positions, and that’s enabled the Cavaliers to use captain Tyzai Lyles, who creates havoc, as a rover.

“Jordan has slimmed down a lot to 200, but he’s gotten stronger,” Hampton said. “He’s really jacked up. That’s a kid who’s in the weight room a lot.”

Jordan said he made the decision to get trimmer and tougher after last season ended.

“I followed a cardio workout, ate right, and I also play a lot of baseball in the offseason,” Jordan said. “That got me in good shape.”

Even after Thursday’s monster game, Jordan still considers himself a baseball player who also happens to be successful at football.  A key guy for the diamond Cavaliers since he was a freshman, he’s a southpaw pitcher who can also swing the bat.

“My goal is to play college baseball,” he said. “I like Wingate and UNC Greensboro.”

North (7-2, 4-1 YVC) will finish the season with two road games that should be routine wins. The Cavaliers won’t be back home until the playoffs start. That’s when Jordan is sure to hear someone yell, “Play like your dad” as soon as he comes out of the locker room.

And Jordan will smile.

“My dad was pretty happy with the way I played last week,” he said.