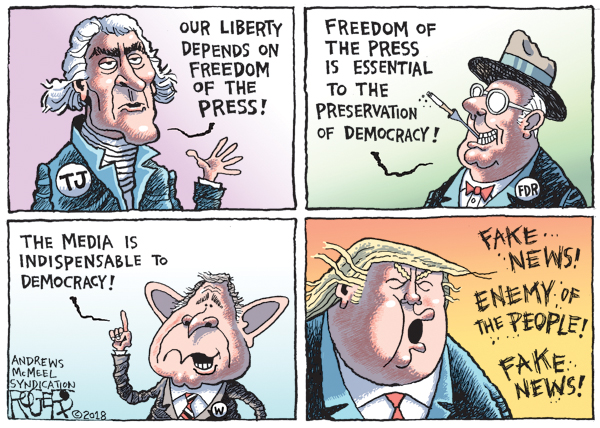 If President Donald Trump has a list of reporters and media organizations labeled “enemy of the people,” it is safe to assume the supportive “Fox and Friends” triumvirate is not on there.

The panel has gushed that Trump looked “big” on TV and sternly reminded viewers that the president is “the boss.” At a Trump rally last month, a show contributor lobbed 11 minutes worth of conservative platitudes.

But a few cracks are forming on the Fox trio’s set over Trump’s escalating crusade against the media, amid growing criticism that his rhetoric has contributed to a hostile political environment. Trump on Monday called the media “the true enemy of the people” after a fervent supporter of his allegedly mailed two potential explosive devices to CNN – Trump’s most frequent target of rage against the media – and prominent Democrats.

Brian Kilmeade, a “Fox and Friends” co-host, was exasperated Tuesday morning. “I really wish he would lose that term. It doesn’t help anybody,” Kilmeade said. “It doesn’t push back on the media that he wants to push on.”

Kilmeade, who has couched criticism of the president with onionlike layers of support, speculated that Trump’s defensiveness comes from cable news networks that “stack” their shows with panelists to launch barbs at the president. But, Kilmeade said, it is not only frequent targets of Trump who are affected. Many others get hit by “shrapnel” from the president’s incendiary remarks, he explained.

“The press isn’t the enemy of the people,” Kilmeade said.

Co-host Steve Doocy – who once told Trump that he was glad they were friends – was also emphatic. “That broad statement does a lot of damage,” he said, while also attempting to explain why Trump has relied on the term for rancorous applause at his rallies. “I think he probably feels like they are not doing him any favors, and so he doesn’t like them, ultimately.”

But Doocy added: “Are they the enemy of the people? I don’t think so, either.”

The show and the network itself lately have taken some harder stances than Trump might expect in what has otherwise been safe space for the president. In early October, Kilmeade criticized Trump for attacking Christine Blasey Ford after she testified before the Senate Judiciary Committee alleging that then-Supreme Court nominee Brett M. Kavanaugh had sexually assaulted her when they were teenagers. “He chose to blow it,” Kilmeade said of Trump.

And on Monday, “Fox News” host Shepard Smith — noticeably skeptical of Trump and Republican talking points relative to his colleagues — dismantled Trump’s public warning that a caravan of Central American migrants more than 1,000 miles away poses an existential threat to Americans.

“There is no invasion. No one is coming to get you,” Smith told viewers. “There is nothing at all to worry about.”

But Trump found a more receptive host in Laura Ingraham on Monday. Ingraham raised the issue of using the phrase “enemy of the people” in her interview with Trump, questioning how and if that rhetoric could widen his base.

“How does it help America heal from things like this?” she asked.

Trump called the question “fair” but countered that the media did not adequately praise him over ongoing negotiations with North Korea.

Ingraham sympathized and suggested that media coverage of President Ronald Reagan had been too critical, although Reagan did not fight back in the same way Trump has. Trump shot back: Reagan never had a Twitter feed to go on the offensive.

“We have a lot of supporters. You know that better than anybody. All you have to do is look at your ratings, okay?” Trump told Ingraham, though it was unclear whether he was referring to his voters, “Fox News” viewers or the Fox network itself.

“But you know it better than anybody,” he said. “Those supporters know that [the media] are lying.”