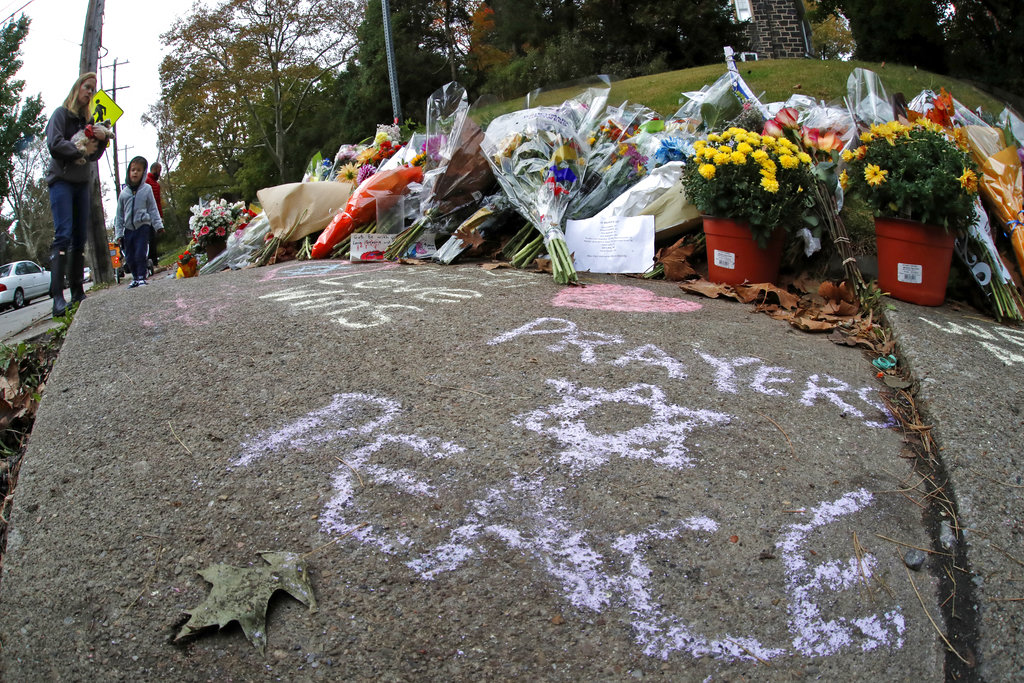 A mother and her young child arrive to place flowers at a spontaneous memorial of flowers and sidewalk writing a block from the Tree of Life Synagogue on Monday, Oct. 29, 2018. A gunman shot a killed 11 people while they worshipped Saturday, Oct. 27, 2018 at the temple. (AP Photo/Gene J. Puskar)

Faith doesn’t mean living with certainty. Faith is the courage to live with uncertainty, knowing that God is with us on that tough but necessary journey to a world that honors life and treasures peace.

The killing of 11 people in their Pittsburgh synagogue Saturday provides all-too-vivid proof of the sickness plaguing this country — too much hate, too much mental instability, too much violence.

Then on Monday morning, Carolinians got yet another jolt: the fatal shooting of a 16-year-old student by another teen at Matthews’ Butler High, the school named for the late David Butler Jr., who grew up in Salisbury.

Contrary to these events, there is good news all around. Children learning to read, patients getting medical treatment, loving families spending priceless time together. But it’s hard not to feel burdened when such bitterness erupts.

First, the attack on Jewish worshipers at the Tree of Life Synagogue was an attack on all of us. According to police, 46-year-old Robert Bowers stormed into the synagogue shouting hate for Jews and killing worshipers in a 20-minute attack. It’s hard to believe this  kind of anti-Semitism still festers in our country, but it was openly chanted in 2017’s  torch-lit march in Charlottesville, and the hateful sentiment is rife in the dark corners of the internet.

People eager to blame today’s fractious atmosphere on President Donald Trump only add to the rancor tearing at this nation. Yes, of course Trump has coarsened public discourse. He talks and tweets in a way that no president has before, often being deliberately hurtful. But Trump did not arise in a vacuum. He is a symptom and agitator of the current mood, but he did not create it.

That said, the president and others who carry a megaphone in the marketplace of ideas have a responsibility. Stop pointing fingers; start moving toward common ground. Honor life. Treasure peace. And if you think political change is in order, exercise your right to vote and encourage others to do the same. Complaining about the situation is not enough.