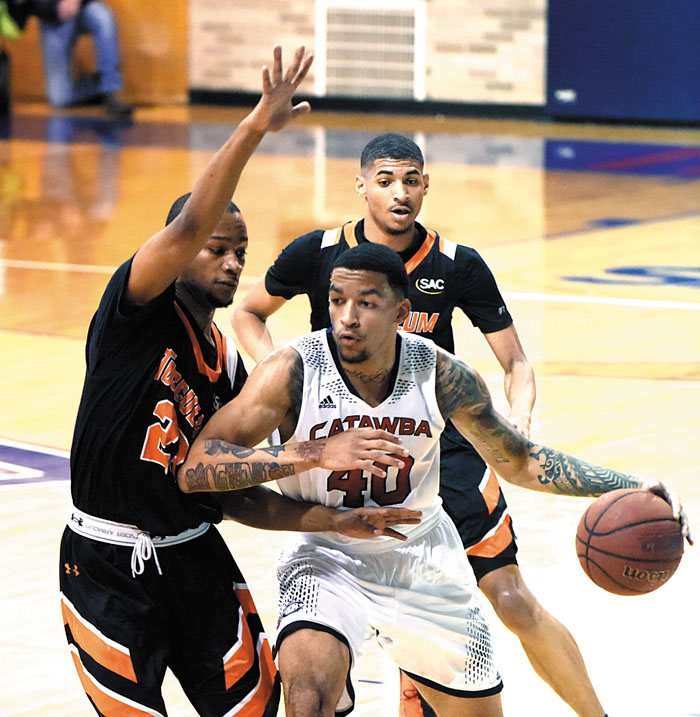 In the second half of the opening game, standout Jameel Taylor went down with a high ankle sprain.

Taylor tried to come back quickly and tested the ankle without positive results.

“It was the first injury of my career,” Taylor said. “I tried to play through it, and I re-injured the ankle twice.”

When it was clear Taylor was going to need to sit at least a month to fully heal, and with the season off to a shaky start, Catawba opted for the medical redshirt route.

That decision basically meant misery in 2017-18. Even with departed Jerrin Morrison performing his high-wire act, Catawba went 11-15 overall and 7-13 in the South Atlantic Conference. Frequently, in an unforgiving league, it wasn’t pretty. Catawba was just 4-7 at home.

With Taylor at 100 percent, it’s safe to say the Indians would’ve won 15 times and would’ve had a winning record.

Now Taylor is fully healthy and back on the floor, which means Catawba adds a guy who’s going to score an efficient 16-18 points a game while making everyone else better. Catawba has a long, strong, 19-man roster and there’s a lot of talent on board, but no one will be more important than the 6-foot-4 Taylor, who was All-SAC second team as a sophomore and junior.

“He does everything well, a true two-way player,” Perron said. “He can play the 1, the 2, or the 3. He’s our best scorer and he often guards the opponent’s best perimeter scorer. He can score at all three levels (rim, mid-range, 3-point line) and is a willing distributor. And with all those skills, the only accolade he cares about is winning.”

Historically, Taylor has been of the finer players in a league stocked with tough D-II athletes. He provides leadership by example and he’s a go-to guy at the end of games. He has a knack for finishing over 6-7 guys, and he’s frequently fouled while doing it.

“It was a challenge to keep my head straight last year,” Taylor said. “It was so hard to watch us losing to teams we should beat. I can’t wait for this season. I’m going to play with some anger.”

The challenge for Catawba and Taylor will start immediately. The Indians flew west early Monday morning and play at Wichita State tonight in an exhibition game at 8 p.m. (EST).

Taylor’s bum ankle wasn’t the only setback the Indians dealt with last season. The silver lining was that some guys who wouldn’t have played much if everyone had been healthy wound up playing a lot. They gained experience, and experience is generally good, even when it’s in losing causes.

Malik Constantine, a 6-6 junior who averaged 13.4 points and a team-best 7.0 rebounds, is another potential All-SAC player for the Indians.

“His athleticism and length allow us to be creative at both ends of the floor,” Perron said.

Post man Jeremy McLaughlin, a 6-7 senior, and guard Jordan Barber have been rock-solid role players for years and both could take another step. McLaughin averaged 9.1 points and 6.6 rebounds, while Barber handed out 61 assists and made 30 3-pointers.

“Barber can take over games with his energy,” Perron said. “If McLaughlin can be consistently productive, it will make several other guys more productive.”

There are a host of talent newcomers.

Jordan McElveen (6-4) transferred to Catawba from Davis & Elkins, where he was the leading scorer last season. Perron expects him to boost an offense that shot 43.5 percent from the floor last year.

Ben Zemonek (6-6) was a steady, solid player at Lenoir-Rhyne before transferring to Catawba and sitting out last season. He’s proven he can rebound in the SAC.

Freshman Terrence Whitfield (6-4) attended Massanutten Military Academy and has experienced tough competition. He’ll be in the rotation right away.

“Cooper brings a good balance of distributing and scoring, while Hassett can shoot the 3 and has the quickness to pressure the basketball,” Perron said.

Freshman Ben Bowen, the tallest Indian at nearly 6-10, could develop into a defensive presence and rim protector.

“We’re deeper, we’re bigger, and we’re better,” Barber said. “Everyone is holding each other accountable.”

Perron is entering his fifth season.  He succeeded Jim Baker, who was head coach for 20 seasons. Sam Moir, who died on Oct. 20, had guided Catawba for the previous 34 years.