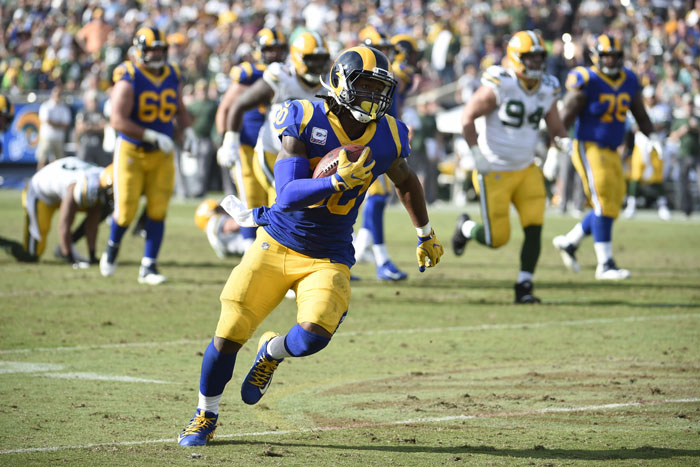 Los Angeles Rams running back Todd Gurley runs for a touchdown during the second half of an NFL football game against the Green Bay Packers, Sunday, Oct. 28, 2018, in Los Angeles. (AP Photo/Denis Poroy)

LOS ANGELES (AP) — Greg Zuerlein hit a 34-yard field goal with 2:05 left and Ramik Wilson forced and recovered Ty Montgomery’s fumble on the ensuing kickoff return, allowing the Los Angeles Rams to remain unbeaten without a late defensive stand in a 29-27 victory over the Green Bay Packers on Sunday.
Jared Goff passed for 295 yards and three touchdowns while the Rams (8-0) were sternly tested by the Packers (3-3-1) and Aaron Rodgers, who threw for 286 yards.
Both teams rallied from 10-point deficits to take a lead in front of a bipartisan Coliseum crowd, but Rodgers never got the chance to mount one of his trademark winning drives.
Instead, the Rams extended their best start to a season since 1969 with another key play from LA’s superlative special teams — and two crushing special-teams mistakes by Green Bay.
Marquez Valdes-Scantling caught a 40-yard touchdown pass from Rodgers with 8:50 left to put the Packers ahead 27-26, but Goff and Todd Gurley drove the Rams into range for Zuerlein’s second field goal of the fourth quarter after a 25-yard punt by JK Scott.
Montgomery then coughed up his return. Gurley ran 17 yards for a key first down and stopped before reaching the end zone in the final seconds — probably enraging his fantasy owners, but allowing the Rams to run out the clock.
Josh Reynolds caught two touchdown passes for Los Angeles, while Gurley rushed for 114 yards and scored a touchdown in his franchise record-tying 11th consecutive game on a 30-yard pass in the third quarter.

EAGLES 24, JAGUARS 18
LONDON (AP) Carson Wentz threw three touchdown passes to different players.
Tight end Dallas Goedert caught one of the touchdown passes in the first half, and running back Wendell Smallwood and tight end Zach Ertz scored theirs in the second half for the Eagles (4-4), making their first appearance in England.
Blake Bortles, restored as the starter despite being pulled in a loss to the Houston Texans a week earlier, completed 24 of 41 passes for 286 yards for the slumping Jaguars (3-5), who lost their fourth consecutive game.
Despite Jacksonville’s familiarity with playing in England — it was the Jags’ sixth consecutive year of playing overseas, and they had won their last three — the record crowd of 85,870 formed a decidedly pro-Eagles crowd.
Philadelphia lost 2017 All-Pro RT Lane Johnson injured his left knee on the Eagles’ opening drive and did not return.

SAINTS 30, VIKINGS 20
MINNEAPOLIS (AP) — Drew Brees and New Orleans paid back Minnesota for a last-second loss in the playoffs last season, using two key turnovers, including a 45-yard interception return by P.J. Williams.
Alvin Kamara had two touchdowns and Will Lutz made three field goals for the Saints (6-1). They needed only 120 passing yards by Brees to beat the Vikings (4-3-1).
Stefon Diggs had 119 receiving yards and a score in his curtain call after the “Minneapolis Miracle” catch in the NFC divisional round in January, but he stopped his drag route in a miscommunication with quarterback Kirk Cousins right before Williams picked of the ball off for the pivotal third-quarter touchdown.
Adam Thielen had another record-setting performance for the Vikings with 103 yards and a score, but his red-zone fumble in the second quarter was returned 54 yards by Marshon Lattimore to set up the go-ahead touchdown for the Saints.

CARDINALS 18, 49ERS 15
GLENDALE, Ariz. (AP) — Josh Rosen threw a 9-yard touchdown pass to fellow rookie Christian Kirk with 34 seconds to play to rally the Cardinals in a matchup of teams with two of the worst records in the NFL.
The Cardinals beat San Francisco for the eighth straight time and second time in three weeks.
Arizona (2-6) got two fourth-quarter touchdown passes from Rosen after the 49ers (1-7) had built a 15-3 lead.
Rosen’s 13-yard pass to Larry Fitzgerald cut the lead to 15-10 with 11:06 to play. Fitzgerald also caught a 2-point conversion pass after Kirk’s TD.
Fitzgerald, in his 15th NFL season, caught eight passes for 102 yards, his best game of the season.
C.J. Beathard connected with Marquise Goodwin on a 55-yard play for the 49ers’ only touchdown.
Fitzgerald’s 112th career touchdown catch moves him past Tony Gonzalez alone into seventh on the NFL career list. He’s caught a TD pass in each of his last two games after getting none the first six games of the season. He needs three to tie Antonio Gates for sixth.

COLTS 42, RAIDERS 28
OAKLAND, Calif. (AP) — Andrew Luck threw his third touchdown pass of the game to break a tie with 5:28 to go and the Colts won in consecutive weeks for the first time in three years.
Luck connected with all three of his tight ends, with the 10-yard pass to Jack Doyle putting the Colts (3-5) up 35-28. Luck connected earlier in the game on passes to Mo Alie-Cox and Eric Ebron and finished with 239 yards against an overmatched defense for the Raiders (1-6).
Marlon Mack ran for a career-high 132 yards and two touchdowns, breaking the personal mark he set last week against Buffalo with 126 yards. Mack’s second TD came after Doug Martin lost a fumble for Oakland and sealed the victory.
Derek Carr threw three TD passes and ran for a fourth just days after Oakland traded his top receiver, Amari Cooper, to Dallas. But it wasn’t enough to prevent another loss in what is quickly becoming a lost season to begin coach Jon Gruden’s second stint with the team.
Vinatieri set the record as the NFL’s top all-time scorer in the first half. He kicked a 26-yard field goal in the first quarter to tie Morten Andersen with 2,544 points, and then added a 25-yarder late in the second to set the record. Viantieri scored three more points, giving him 2,550 for his career.

STEELERS 33, BROWNS 18
PITTSBURGH (AP) — Ben Roethlisberger threw two touchdown passes to Antonio Brown, James Conner scored twice to bring some solace to a city grieving from tragedy.
The Steelers (4-2-1) overcame a slow start and their own mistakes to win their 15th straight at Heinz Field over the Browns (2-5-1), who have lost 25 consecutive road games — one shy of the NFL record.
The win brought temporary comfort to Pittsburgh’s fans a day after a gunman stormed into the Tree of Life Synagogue and killed 11 people. A moment of silence was observed before the game and several signs with the Steelers’ helmet logo — inlaid with a Star of David — were displayed by fans.
Roethlisberger connected on TD passes of 43 and 1 yard with Brown, and Conner continued to minimize Le’Veon Bell’s absence. Conner rushed for 146 yards, and scored on a 12-yard run in the third quarter that put the Steelers ahead 23-12.
Conner’s 22-yard TD with 2:04 left made it 33-12.
Rookie quarterback Baker Mayfield threw a pair of TD passes, but the Browns squandered some early scoring chances and remain winless in Pittsburgh since 2003.

CHIEFS 30, BRONCOS 23
KANSAS CITY, Mo. (AP) — Patrick Mahomes threw for 303 yards and four touchdowns, Sammy Watkins had 107 yards receiving and two of the scores.
Travis Kelce and Kareem Hunt added touchdown catches for the Chiefs (7-1), who have won 19 of their past 21 games against division rivals. That includes all three games this season.
Case Keenum had 262 yards passing and two scores for the Broncos (3-5), while Phillip Lindsay had a big day in his first career start. The undrafted rookie had 95 yards rushing and a score while catching three passes and providing a spark out of the backfield.
Still, that production couldn’t help the Broncos overcome their own sloppiness. They were flagged 10 times for 83 yards, several of the penalties wiping out big gains — and that doesn’t include a few that were declined or offsetting, including a personal foul on defensive tackle Derek Wolfe.
Denver has lost seven straight to its biggest rival.

REDSKINS 20, GIANTS 13
EAST RUTHERFORD, N.J. (AP) — Safety D.J. Swearinger intercepted two passes, Matt Ioannidis had 2½ sacks, and the NFC East-leading Redskins rode their defense to a third straight win.
Adrian Peterson caught a 7-yard touchdown pass from Alex Smith and ran for a season-high 149 yards, with the last 64 coming on a touchdown jaunt with 3:06 to play, as the Redskins (5-2) matched their best start since 2008.
Dustin Hopkins added field goals of 53 and 39 yards for the Redskins, who will finish the week with a 1½-game lead in the division. The three-game winning streak is their longest in two seasons.
The Redskins sacked a battered Eli Manning seven times, forced the two turnovers and made big play after big play in sending New York (1-7) to its fifth straight loss.
Aldrick Rosas kicked field goals of 37 and 21 yards for the Giants. Manning, 30 of 47 for 316 yards, hit Evan Engram on a 2-yard touchdown pass with :17 to play.

BENGALS 37, BUCCANEERS 34
CINCINNATI (AP) — Jessie Bates returned Jameis Winston’s fourth interception for a touchdown, and Randy Bullock kicked a 44-yard field goal on the final play.
Winston was benched after matching his career high with four interceptions. Ryan Fitzpatrick rallied the Buccaneers (3-4) to a 34-34 tie with a pair of touchdown passes, including his 18-yard toss with 1:05 left.
The Bengals (5-3) recovered from their second-worst drubbing under Marvin Lewis and pulled it out with only their scoring drive in the second half. Andy Dalton had completions of 23 and 9 yards to A.J. Green that got them in field-goal range.
Tampa Bay has allowed at least 30 points in five games and changed defensive coordinators two weeks ago. This time, Winston was the Bucs’ biggest problem.
He threw four interceptions for the third time in his career, including one directly to Bates that the safety returned for Cincinnati’s fourth defensive touchdown of the season. Winston went to the bench, and Ryan Fitzpatrick pulled Tampa Bay even.
Fitzpatrick threw a 72-yard touchdown to Mike Evans, his fifth TD pass of at least 50 yards this season — most in the NFL. He also led an 88-yard drive to the tying score, hitting O.J. Howard for an 18-yard touchdown and completing another pass for the conversion.
Now, the Bucs have to decide which one will lead the NFL’s top-ranked offense in yardage.

SEAHAWKS 28, LIONS 14
DETROIT (AP) — Russell Wilson threw three touchdown passes in the second quarter to put the Seahawks ahead.
The Seahawks (4-3) looked sharp on both sides of the ball coming off their bye and won for the fourth time in five games after opening the season with two losses.
Wilson completed 10 passes, two for scores, before having an incompletion late in the second quarter. He finished 14 of 17 for 248 yards, leading to a perfect quarterback rating. Wilson’s 24-yard pass to Tyler Lockett , 15-yard throw to David Moore and 12-yard pass to Ed Dickson for touchdowns gave Seattle a 21-7 lead at halftime.
Chris Carson, who had 105 yards rushing, scored on a 7-yard run early in the fourth to put the Seahawks up 28-7.
Detroit acquired run-stuffing defensive tackle Damon “Snacks” Harrison from the New York Giants for a fifth-round pick just four days before the game, but he wasn’t able to immediately help one of the NFL’s worst run defenses.
The Lions (3-4) had won three of four.

BEARS 24, JETS 10
CHICAGO (AP) — Mitchell Trubisky threw for two touchdowns for the short-handed Bears.
The Bears (4-3) got the win after dropping two in a row to fall out of the NFC North lead, even though star pass rusher Khalil Mack (right ankle) and No. 1 receiver Allen Robinson (groin) missed the game.
With Sam Darnold struggling against Chicago’s defense, the Jets (3-5) managed just 207 yards and lost their second straight game.
Trubisky was shaky but did enough to help the Bears come out on top. He connected with Tarik Cohen for a 70-yard touchdown on a screen pass in the first quarter and threw a 4-yard scoring pass to Anthony Miller in the third, making it 14-3. But the second-year pro was wild again after struggling with his control against New England the previous week.
Trubisky was 16 of 29 for 220 yards. He also ran for 51 yards on six attempts.
Cohen’s lone reception was the big touchdown. He also ran for 40 yards on five carries.

Logano shoves past Truex to earn shot at NASCAR…